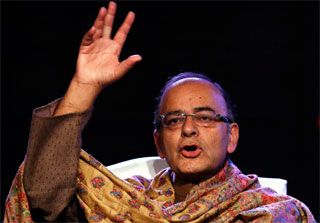 India will not stray from a plan to slash its fiscal deficit to 3 per cent of gross domestic product within two years, Finance Minister Arun Jaitley said on Thursday, despite top aides' advice to revive the economy with more infrastructure spending.

Jaitley, who will present his first full-year budget on Feb. 28 for the 2015/16 financial year, said the current level of deficit was unacceptable.

"We have a roadmap to bring it (fiscal deficit) down a little below 3 per cent over the next couple of years and then we intend to maintain it," Jaitley said at an event in Davos.

The government is scrambling to contain the fiscal deficit at 4.1 per cent of GDP in the fiscal year ending March, after a sharp shortfall in revenue that forced it to rein in spending.

In his budget, Jaitley is expected to announce subsidy cuts while allocating more for infrastructure, reflecting a rightward shift in thinking since Prime Minister Narendra Modi was elected in May.

Falling oil prices have reduced the fuel subsidy bill and the government has roughly halved expenditure growth this fiscal year.

India's economy is recovering from its longest slowdown since the 1980s, but demand and investment remain weak.

Modi and Jaitley seem determined to spend more on roads and railways but, despite the views of their advisers, without breaking deficit commitments. The three top agencies place India on the lowest rung of investment grade for its debt.

Jaitley, who is leading the delegation to Davos, said the government wanted to reduce subsidies, estimated at around 2 per cent of GDP, and transfer funds to other sectors.

"That is the area where we intend to move in order to cut down some part of the expenditure, in order to finance our own activities."

Last week, Modi said his government would control expenditure by cutting "leakages, not subsidies themselves".

However, a panel appointed by Modi this week recommended scaling back a food welfare programme, a move that would likely meet resistance from left-leaning parties.

Jaitley ruled out abolishing subsidies from Asia's third-largest economy, which is home to one third of world's poor. He said the government would take necessary steps to return the economy to growth of 8 per cent to 9 per cent.

He said he would simplify taxes, but would not raise even "a rupee in budget from aggressive taxation", adding that he expected parliament to approve a major reform to unify federal and state taxes in the budget session.
Source: