The President said that because of the policies of the government foreign investment has increased from $36 billion to $60 billion during the period. 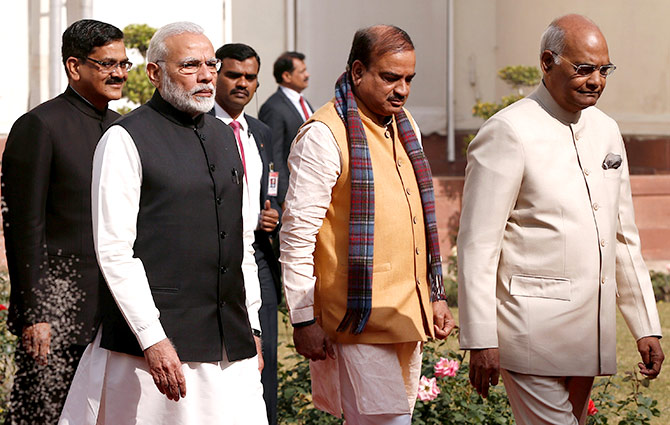 President Ram Nath Kovind on Monday said the government has been able to contain inflation and fiscal deficit and will work to double the income of farmers by 2022.

In his maiden address to the joint sitting of both Houses of Parliament, the President said the country has been able to achieve economic growth despite slowdown in global economy.

"Government is committed to doubling of farmers' income by 2022. To ensure remunerative price to farmers for their produce, the agriculture mandis are being connected online. So far, agricultural commodities valued at about 36,000 crore have been traded on e-NAM portal," he said.

He noted that as a result of government’s policies and the hardwork of farmers, a record production of more than 275 million tonnes of food grain and about 300 million tonnes of horticultural produce have been achieved in the country.

"The highest priority of my government is to remove various difficulties faced by farmers and to raise their standard of living. The schemes of my government are not only removing their hardships but also reducing the expenditure incurred by them on farming," he said.

Talking about the economic situation, he said: "In the last three-and-a-half years, inflation, current account deficit and fiscal deficit on an average have come down."

The President said that because of the policies of the government foreign investment has increased from $36 billion to $60 billion during the period.

There was a temporary slowdown in economic growth in the first quarter of 2016-17, he said, adding the situation reversed in the second quarter of the current fiscal.

The President further said that the 12-digit unique identity number Aadhaar has helped in securing the rights of the poor by eliminating middlemen.

Talking about digital initiative, he said 'BHIM App' is playing a major role in promoting digital transactions. The recently launched 'Umang App' has made more than 100 public services available on mobile phones.

He further said that about 2.70 lakh Common Service Centres have been set up that provide digital services at low cost, even in the remotest areas of the country.

Referring to the 'Pradhan Mantri Mudra Yojana', he said about 10 crore loans have been sanctioned so far and more than Rs 4 lakh crore worth of loans have been disbursed. About 3 crore first time beneficiaries have received assistance under this scheme for self employment.

Source: PTI© Copyright 2020 PTI. All rights reserved. Republication or redistribution of PTI content, including by framing or similar means, is expressly prohibited without the prior written consent.
Related News: CAD, Ram Nath Kovind, Jaitley
SHARE THIS STORY
Print this article