Cases across the country against defaulters who owe over Rs 1 crore each, reveal CIBIL data.

Banks and financial institutions are fighting cases across the country to recover at least Rs 1.86 lakh crore from defaulters who owe more than Rs 1 crore each.

While handing over information in a sealed cover, the Reserve Bank of India (RBI) had asked the Supreme Court not to disclose the data on defaulters in public.

But the database on cases where banks have already started legal proceedings is maintained by credit information companies to which all member banks and financial institutions are required to report this data periodically. This data is shared in public under RBI’s instructions.

Business Standard reviewed the database of one the largest such credit information companies, CIBIL, for data up to December 2015 and found the banks and financial institutions were fighting in courts to recover at least Rs 1.86 lakh crore.

There are three other recognised credit information companies.

Financial institutions can be a member with any or all of them. CIBIL and other information companies reveal not just gross numbers but the name of companies and their directors for each case reported and the amount outstanding against them.

The RBI in its master circular on disclosure requires that banks check against these databases before lending.

For several reasons, the sum (Rs 1.86 lakh crore) is an underestimation. First, not all banks and financial institutions in the country are members of the CIBIL database.

Business Standard reviewed some of the other databases as well.

Take the example of Abhyudaya Co-operative Bank Ltd. It is a member of the Equifax database, and is fighting in courts to recover at least Rs 1,160 crore from defaulters and wilful defaulters who owe the bank more than Rs 1 crore each.

This data is not reflected in the CIBIL records.

Similarly, Barclays Bank is registered with Experian, a third credit information company, and is trying to get back Rs 747 crore from defaulting clients who owe the bank more than Rs 1 crore each.

Reviewing the databases, it became clear that even when banks report such cases to multiple credit agencies, at times, their data on number of cases and the total money involved, as disclosed by the credit information companies, does not match.

Wilful defaulters are a subset of the “defaulters”. The banks do not have to report the rest.

The Rs 1.86-lakh-crore includes those cases where wilful defaulters owe the banks more than Rs 1 crore and have been taken to court.

So, the number also does not reflect the cases of wilful defaulters — only defaulters-between Rs 25 lakh to Rs 1 crore.

In other words, the CIBIL database of cases where banks have filed court cases against defaulters is not reflective of the entire banking sector. But it is one of the biggest database, explain banking experts.

Dwelling deeper in to the database one finds the public sector bank fighting most number of cases in the courts.

State Bank of India has a 1,972 litigations on-going with the sum involved being Rs 36,105 crore.

Punjab National Bank is next up, fighting 1,032 cases against borrowers of more than Rs 1 crore that collectively owe the banks Rs 16,730 crore. 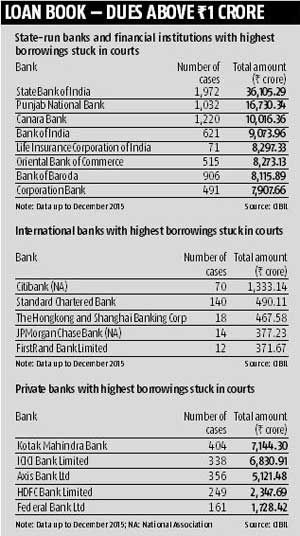 The top 10 list on the basis of cases and the volume of money involved is made up of public sector banks.

Of the private sector Kotak Mahindra Bank is found pursuing the most cases through the courts to recover its money.

However, as Kotak Mahindra clarified to another newspaper, it has an Asset Reconstruction Department that buys stressed and non-performing assets from other banks, and the list of willful defaulters reported CIBIL include the stressed and NPAs they have purchased from other banks.

Life Insurance Corporation, one of the few financial institutions that reports to CIBIL has merely 71 cases but each case locks up much higher investments of the bank. It is trying to recover Rs 8,297 crore from its big borrowers.

Of the foreign banks that report to CIBIL, Citibank is the one fighting to recover the largest sum from its big borrowers.

It has filed 70 cases to recover Rs 1,333 crore from its borrowers who have defaulted.

What does this number signify in relation to the overall stress and challenge the banks face from defaulting borrowers?

It is difficult to get a full estimate of the scale of the problem as the RBI refuses to disclose the data on total stressed assets — where borrowers are defaulting on their repayments.

But, the Rs 1.86 lakh crore caught in litigation is the visible tip of the strain banks are facing from the non-performing assets — where repayment of loans has been delayed for more than a fixed period.

As the RBI told the Supreme Court recently, non-performing assets, or NPAs (where repayment of loans has been delayed for more than a fixed period), are classified as Sub-standard, Doubtful and Loss Assets.

For the standard and sub-standard and doubtful loans the banks have various options to deal with it — all of these do not end up in courts.

The banks can try to restructure loans by taking some financial hit within the range the RBI prescribes or it can write off some of the losses from its balance sheet.

The overall NPAs for public sector banks in December 2015 stood at above Rs 3 lakh crore, the state minister for finance told Parliament recently.

The Supreme Court will now decide if it wants the full picture of the stress facing banks revealed to public including names of all defaulters and non-performing assets.

2016: Profits of public sector banks (PSBs) plunge as they create provisions for non-performing assets in the December FY15 quarter results

PSBs have written off Rs 1.14-lakh-crore bad debt over the past three years

Bank stocks plunge, as details of the NPA problem emerges