The finance ministry's revenue department is likely to issue a clarificatory note within this week on the taxation issues of gold monetisation scheme (GMS) investors. The clarifications will include exemptions on income tax and long- and short- term capital gains tax.

Additionally, Business Standard has learnt a number of state-owned banks are in talks with some of the country's largest and richest temple trusts, including those managing Sabarimala, Sree Padmanabhaswamy, Tirumala Tirupati, Guruvayur, and Puri Jagannath, among others, to part with some of their massive reserves of idle gold for GMS.

These and other issues surrounding the gold schemes were discussed at a meeting, which the finance ministry and the Reserve Bank of India officials held with representatives of various banks in Mumbai on Tuesday.

The meeting was chaired by Economic Affairs Secretary Shaktikanta Das.

"The income tax department may issue clarifications on the tax treatment for those investing in the GMS any day now. These will include exemptions on long- and short- term capital gains tax and income tax," said a senior official.

There are about 20,000 tonnes of gold worth Rs 52 lakh crore or Rs 52 trillion lying idle with households and institutions, a bulk of them with temples.

The Tirupati temple is believed to be holding some 200 tonnes of gold in its vault. The world's richest temple, the Sree Padmanabhaswamy in Kerala, is reportedly holding Rs 1 lakh crore or Rs one trillion worth of gold and valuables in its vaults.

GMS, launched by Prime Minister Narendra Modi on November 5, has received a "slow response", according to the finance ministry. The gold bond scheme, on the other hand, has received positive response from investors. GMS has been able to garner only 400 gm of physical gold till November 18.

. It has allowed depositors to give their gold directly to the refiner without involving the collection and purity testing centres, wherever it is acceptable to the banks.

"This will encourage the bulk depositors like HUFs (Hindu undivided families) and institutions to participate in the scheme," the government had said.

In its previous meeting in New Delhi, it had already met the representatives of the gems and jewellery sector associations to seek their views on making the monetisation scheme attractive.

Following that, the government allowed around 13,000 Bureau of Indian Standards (BIS)-licensed jewellers to act as 'collection and purity testing centres', provided they have a tie-up with BIS' certified refiners.

WORTH ITS WEIGHT IN GOLD

Tax clarifications for gold monetisation scheme to come in ‘any time’

Talks on with richest temples, including Tirupati, Sabarimala and Padmanabhaswamy

India’s households and temples hold some 20,000 tonnes of gold

Image: An employee receives payment from a customer inside a gold jewellery showroom in Mumbai. Photograph: Danish Siddiqui/Reuters 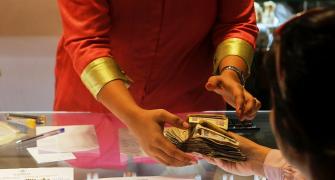