Banks' gross NPAs may rise to 13.5% by September: RBI report

The gross non-performing assets of banks may rise to 13.5 per cent by September 2021, from 7.5 per cent in September 2020, under the baseline scenario, according to Financial Stability Report (FSR) released by the Reserve Bank of India. If the macroeconomic environment worsens into a severe stress scenario, the GNPA ratio may escalate to 14.8 per cent, the report said.

"The stress tests indicate that the GNPA ratio of all scheduled commercial banks (SCBs) may increase from 7.5 per cent in September 2020 to 13.5 per cent by September 2021 under the baseline scenario," the FSR report added.

Among the bank groups, public sector banks' (PSBs) GNPA ratio of 9.7 per cent in September 2020 may rise to 16.2 per cent by September 2021 under the baseline scenario, it noted.

The gross non-performing asset (GNPA) ratio of private sector banks (PVBs) and foreign banks (FBs) may increase from 4.6 per cent and 2.5 per cent to 7.9 per cent and 5.4 per cent, respectively, over the same period.

"These GNPA projections are indicative of the possible economic impairment latent in banks' portfolios, with implications for capital planning," it added.

Source: PTI© Copyright 2021 PTI. All rights reserved. Republication or redistribution of PTI content, including by framing or similar means, is expressly prohibited without the prior written consent.
Related News: GNPA, FSR, Reserve Bank of India
SHARE THIS STORY
Print this article 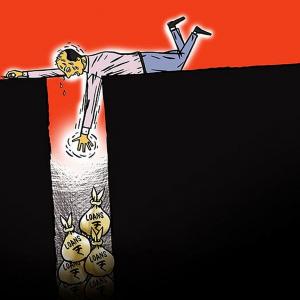