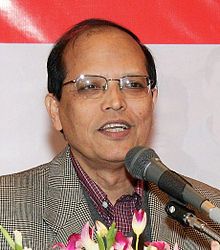 Bangladesh's central bank chief resigned on Tuesday after hackers stole over $100 million from the nation's foreign reserves in what is believed to be the world's biggest ever bank theft that embarrassed the government.

Atiur Rahman, 64, resigned over after a meeting with Prime Minister Sheikh Hasina.

"He (Rahman) has tendered his resignation to the Prime Minister," a Premier's office spokesman told PTI.

Earlier in the morning, an emotional and apparently distressed Rahman told newsmen he was ready to quit for the sake of the country.

His resignation came weeks after the central bank confirmed that the huge amount was stolen from its account in Federal Reserve Bank of New York, sparking a worldwide uproar.

Bank spokesman had said that hackers had stolen $101 million of which $81 million entered the Philippines and the rest went to Sri Lanka to be used in casino business.

Finance Minister AMA Muhith had earlier said he was kept in the dark about the heist for weeks adding that the central bank management must explain its ‘audacity’.

The hacking took place on the night of February 4, using information stolen through the malware, which sent a total of 35 transfer orders to the NY Federal Reserve Bank where the Bangladesh's central bank has an account.

Reports said the hackers misspelled the name of a Sri Lankan non-governmental organisation, triggering a check of the request which raised the alarm.