The Hinduja Group, Mukesh Ambani, Murugappa, and the Adani groups were the other gainers in the Modi regime, while Naveen Jindal and Sun Pharma groups saw the most erosion in their m-cap in the last five years, reports Krishna Kant. 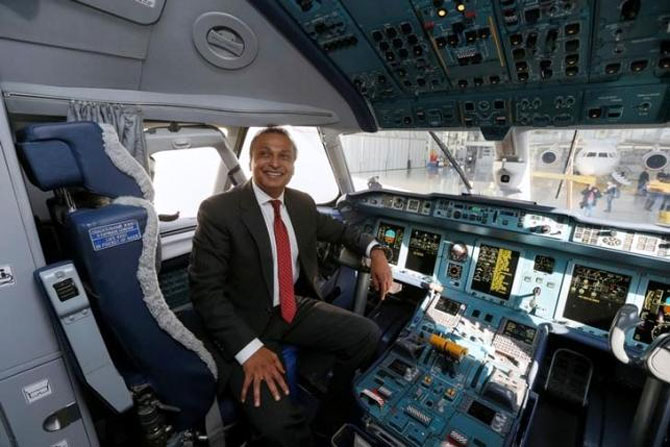 Business groups with a large and successful presence in the retail finance and consumer businesses saw the fastest rise in their market capitalisation (m-cap) during Prime Minister Narendra Modi's regime, while many large business groups with big exposures to manufacturing segments such as power, metals, telecom, and capital goods, faced headwinds.

Mukesh Ambani, Murugappa, and the Adani groups are also included in the top five list.

On the other hand, Anil Ambani, Naveen Jindal, and Sun Pharmaceutical Industries groups saw the erosion in their m-cap in the last five years, while Sunil Mittal's Bharti Group and Pawan Munjal-led Hero Group were the other notable ones with low single-digit annual returns in the same period.

Other large and diversified groups such as Tata, Aditya Birla, Vedanta, and Mahindra & Mahindra were all laggards, with single-digit compound annual growth rate (CAGR) in their m-cap.

Analysts attribute the success of the top gainers to a relatively fast growth in consumer demand and muted corporate capital expenditure.

"In the last five years, economic growth has been led by consumption demand underpinned by a surge in retail credit and higher revenue spending by the government. 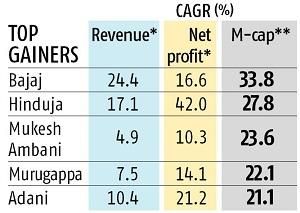 Bajaj Group tops the chart with industry-leading growth in revenue, profit, and m-cap, thanks to a stellar show by Bajaj Finance and Bajaj Finserv.

The combined m-cap of the group is up four times to Rs 4.08 trillion as on March 22, 2019, against Rs 1 trillion on May 26, 2014, growing at an annualised rate of 32.4 per cent. Bajaj Finance's m-cap is up nearly 16 times in the last five years, while Bajaj Finserv is up nearly eight times during the period.

In comparison, the group's flagship company Bajaj Auto's m-cap is up just 50 per cent during the period, growing at an annualised rate of 8.8 per cent.

Similarly, in the Hinduja Group, most of the gains were accounted for by IndusInd Bank, followed by Ashok Leyland.

In the same period, companies' revenue grew at annualised rate of 4.6 per cent.

The FY19 figures are annualised, based on companies' performance during the first nine months of FY19.

The analysis is based on the last five years' financial and stock market performance of a common sample of 679 companies belonging to the country's top non-financial business groups in the private sector. 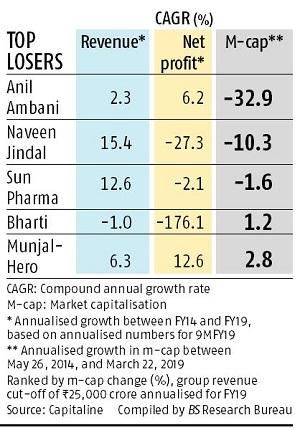 Business Standard's analysis is restricted to groups with combined revenues of Rs 25,000 crore or more during FY19.

The FY19 numbers have been annualised, based on companies' performance during April-December 2018 period.

Reliance Industries, which went past Tata Consultancy Services to become India's most valuable firm, has been the single-largest investor in the private sector in the last five years.

For the entire sample, the growth in profit and revenue was modest, compared to the rise in m-cap.

At the other end of the spectrum, the combined m-cap of Anil Ambani Group firms shrunk by nearly 85 per cent, while Navin Jindal's firms lost 40 per cent of their m-cap.

Analysts also blame the contrast in performance to the poor balance sheet management of many of the business group.

"While it's true that value shifted to consumer companies and retail lenders in the last five years, the market also punished firms with unsustainable levels of debt and poor cash flows regardless of the sector," says G Chokkalingam, founder and managing director, Equinomics Research & Advisory Services.

The period also saw firms from business groups such as Jaiprakash, Videocon, Lanco Infratech, Amtek Auto, Singhal brothers of Bhushan Steel and Bhushan Power, Alok Industries, and Essar Group, among others, going to the insolvency court. 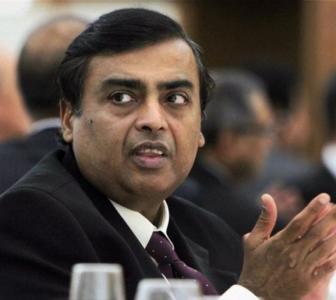 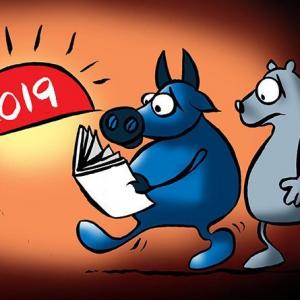 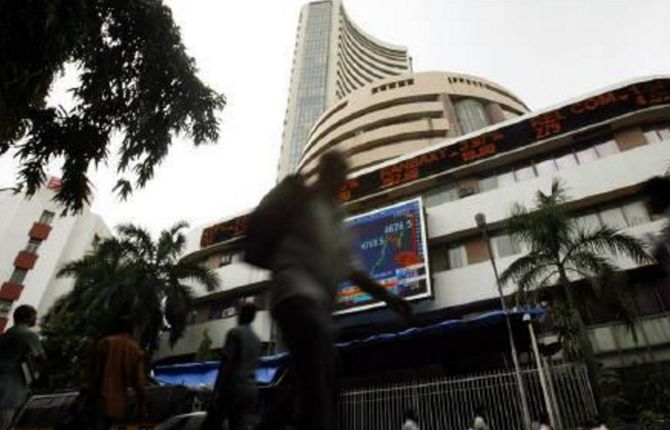