As slowdown gets worse, Pimpri-Chinchwad auto hub is in slow lane

Trucks loaded with parts stand motionless at the factory gates. They cannot be dispatched as Tata Motors is on a temporary shutdown.

Deep production cuts and block closures at many CV makers have also hurt them.

Many of them have had to lay off 10 to 15 per cent of their contract workers.

The first of a 3-part series captures how declining sales and job losses have hit companies in Pimpri-Chinchwad, an automobile hub bordering Pune. 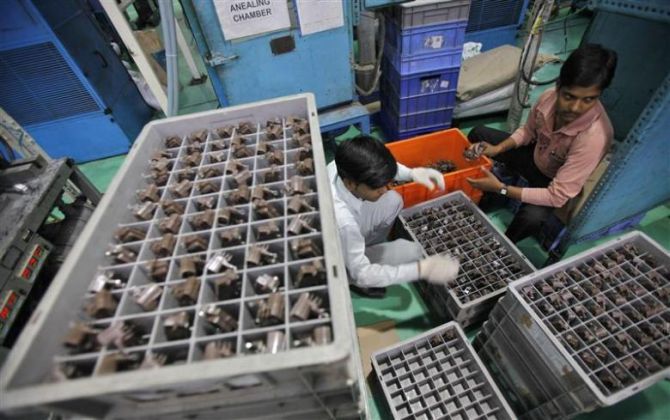 There’s an eerie silence on the dimly-lit shop floors of most small and medium scale auto component makers in Maharashtra’s Pimpri-Chinchwad belt - a major auto cluster in the western India that houses close to 12,000 manufacturing units.

Trucks loaded with parts stand motionless at the factory gates.

They cannot be dispatched as Tata Motors is on a temporary shutdown.

The Tata Motors unit at Pimpri, which makes passenger vehicles and light commercial vehicles (LCVs), is one that most SMEs count on as a key customer.

But it’s not Tata Motors alone that has impacted them adversely.

Many of them have had to lay off 10 to 15 per cent of their contract workers to rein in costs and tide over the current slowdown.

“Some component makers are bleeding and will shut shop if the slowdown continues,” he said.

“From June till now, the situation has deteriorated drastically.

"This month’s schedule (from the CV manufacturers) show that their production in September is 70 per cent less than what it was in March,” said the proprietor of an MSME in Bhosari, which is a tier one supplier to all the CV makers.

“Last year, the order book was so heavy that I was struggling to get contract workers.

"And last month I was forced to let go of around 15 per cent of them,” he said, adding that he expected a 20 per cent drop in revenue in FY20.

Last year, his company had a turnover of Rs 50 crore.

Some have decided to change tack altogether.

Bruised by the cyclical swings in the auto market, a few like Ranvik Auto are looking to reduce their dependence on the industry, and eventually draw business from non-auto segments.

“My sons no longer want to pursue the auto business,” says VM Jagtap, the 70-year old founder of Ranvik Auto, which retrenched 40-45 of its 150 workers in July.

Jagtap’s company, which till recently was a supplier of sub-assemblies and frames to Tata Safari and Sumo, is staring at an empty production bay as Tata Motors has pulled the plug on the models ahead of BSVI.

Ranvik Auto plans to redo its production bay and focus on making parts for the railways.

The company supplies parts to some of Tata’s LCVs.

But the current slowdown has impacted that too, Jagtap said.

“We are bracing for tougher times as the situation in Tata Motors’ Jamshedpur and Lucknow plants is worse,” said another supplier in the region.

He expects his company’s revenue to drop from Rs 220 crore last year to Rs 175 crore this year.

So far, his firm has not laid off any contract workers.

“We will wait till the festivals get over,” he said.

However, it’s not small suppliers alone that are bearing the brunt of the crisis.

A large multinational auto parts maker headquartered in Pune that counts Mahindra, Maruti Suzuki, VECV, Tata Motors, and Volkswagen among others as its customers, is operating at half its installed capacity and has recently had to let go of 20 per cent of its contract workforce.

“In the previous slowdowns, there was always a balancing factor.

"Some segment or the other would make up for the fall in another.

"However, with everything down, this one is particularly bad,” said an official at the MNC cited earlier, adding that the company was rationalising investment and taking a relook at investments to determine what could be deferred.

Srinivas Rathee, partner at Platemaster a company that makes sheet metal parts for various companies, believes that to an extent, the current condition of the suppliers is of their own making.

Poor capital allocation, lack of financial discipline and over dependence on one customer is also responsible for their predicament.

Rathee’s firm, too, had to retrench some of its unskilled workforce, bringing down the number of workers from 110 to 90.

As the slowdown begins to bite, everyone seems to be convinced that things will get worse before they get any better.