Passenger vehicle wholesales in India increased by 17 per cent in the second quarter of the current fiscal year as buying sentiment improved and companies stocked up to cater to enhanced demand in the festive season, auto industry body SIAM said on Friday. According to the latest data by the Society of Indian Automobile Manufacturers (SIAM), passenger vehicles sales in the July-September quarter increased to 726,232 units from 620,620 units in the same period last year.

Similarly, two-wheeler sales during the September quarter this fiscal rose marginally to 46,90,565 units as compared with 46,82,571 units in the same period last fiscal.

It is the sixth consecutive quarter of sales degrowth in the commercial vehicle segment.

Three-wheeler sales also witnessed 74.63 per cent dip in sales during the period under review at 45,902 units as against 180,899 units in the year-ago period.

Vehicle sales across categories during the second quarter declined marginally to 55,96,223 units as against 56,51,459 units in the same period of the previous fiscal.

"In second quarter some segments have shown signs of recovery.

“Passenger vehicles and two-wheelers are positive, although on a very low base of previous year," SIAM president Kenichi Ayukawa said.

He noted that most of the industry segments like commercial vehicles and three-wheeler offtakes remained at par or at lower state than same period 5-6 years ago.

The industry, however, remained bullish on sale prospects in the festive season, Ayukawa said.

"We are expecting good demand in the festive season starting tomorrow," he added.

He noted that the Indian automotive industry is working hard amidst this tough COVID-19 situation to increase production and sales, while ensuring the safety of customers and employees across the whole value chain.

He said that with the implementation of the last set of crash safety standards from this month and BS-VI standards earlier this year, India is now almost at par with Europe on safety and emission standards. 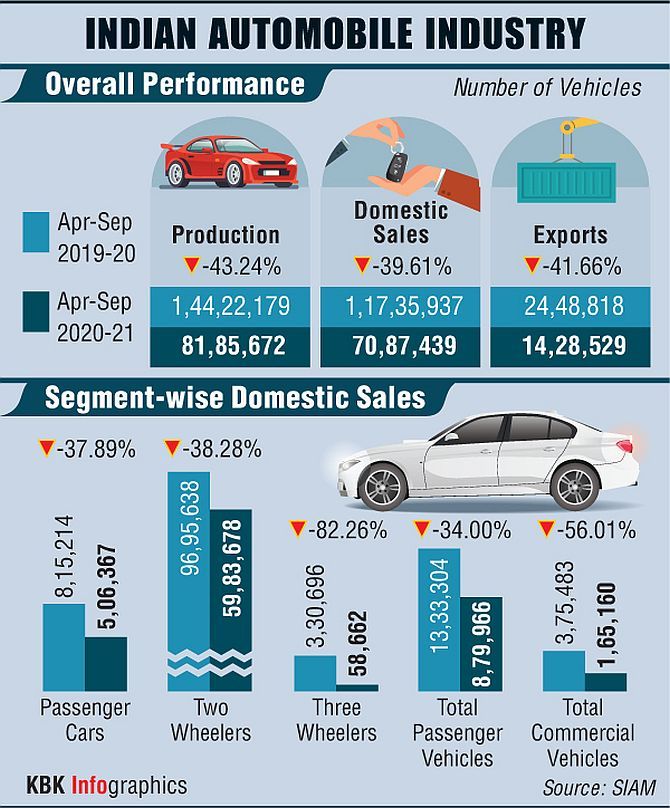 The vehicle scrappage incentive scheme, which would help remove old vehicles off roads, would help in fully realising the benefits of BS-VI emission regime, Ayukawa said.

He said that in line with government vision, the industry would try to double vehicle exports from the country in the next five years.

On sales forecast, Ayukawa said that due to the coronavirus pandemic, it was difficult to predict the future beyond the end of this year.

Economic recovery and other related factors would help in generating the demand, he added.

SIAM director general Rajesh Menon said that if numbers in the last five years are compared then it shows industry volumes have gone below the 2016 level.

"In terms of volumes if you look at quarterly and half yearly comparisons and also to some extent monthly comparison, we have gone below 2016 in most of the segments," he noted.

In September, passenger vehicle wholesales in India increased by 26.45 per cent to 272,027 units in September as against 215,124 units in the same month last year. During the month, wholesales of Maruti Suzuki India stood at 147,912 units, up 33.91 per cent from the same month last year.

In the two-wheeler space, Hero MotoCorp wholesales stood at 697,293 units in September, up 16.12 per cent from same month last year.