Onion has become costlier by over 33 per cent in the last one week and over 70 per cent in September so far, reports Dilip Kumar Jha. 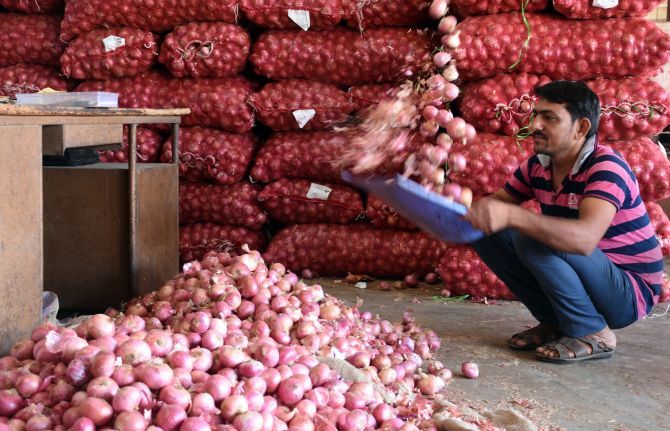 Onion prices have jumped in the Mumbai retail market to trade at Rs 60 a kg on reduced supply from wholesale mandis. In other metro centres also, the retail onion price is hovering between Rs 58 and 65 a kg.

Onion has become costlier by over 33 per cent in the last one week and over 70 per cent in September so far.

Farmers and stockists have reduced supply from cold storage amid expectations of further increase in prices.

In Mumbai wholesale mandi, onion supply has declined to 140 tonnes now from the level of 2500 tonnes in the peak arrival season. According to sources, the government is considering levying stock limit and ban on exports to boost physical supply into mandis.

“With the new season crop arrival a month away, onion prices would continue to rise. The government’s imposition of $850 a tonne of the minimum export price and proposing 2,000 tonnes of its import have not helped control prices. Any further action, however, would yield negative impact on onion prices when the new season crop gets harvested. The government will have to offer subsidy as onion prices would crash with the onset of arrivals,” said Sanjay Sanap, an onion wholesaler based in Nashik district of Maharashtra.

In the benchmark Lasalgaon mandi, onion prices have declined, albeit marginally, to trade at Rs 41 a kg on Monday from the four-year high level of Rs 45 a kg on September 19.

Prices of green vegetables have declined by up to 39 per cent in the past three weeks because of a sharp increase in the arrival of new season harvests.

Data compiled by the National Horticultural Board (NHB) showed that the price of green peas declined 39 per cent to trade at Rs 55 per kg in the wholesale Bengaluru Agricultural Produce Market Committee (APMC) on Monday. Trading at Rs 80 per kg in retail, green peas have, so far in September, posted a decline of 33 per cent.

Following the trend, bitter gourd slumped 17 per cent to Rs 20 per kg in Delhi for the first three weeks of September. Vegetable additives such as chilli, okra and garlic also reported a decline in most mandis. The price decline comes ahead of the festive season.

Excessive rainfall in almost all major vegetable-growing regions has delayed sowing. Also, sudden water logging has damaged standing crop this kharif season. The drop in vegetable prices is being considered a temporary relief. Prices of these items are likely to increase in the coming weeks.

“There has been a sharp increase in the arrival of new season crops as farmers have started plucking matured vegetables with water receding from the fields. The arrivals are set to increase in the weeks to come,” said Santosh Sidhangouda Patil, chairman, APMC Sangli, one of the largest vegetable mandis in Maharashtra.

Vegetables are drought-tolerant crops, which require an intermittent sprinkling of water for blooming. Most major vegetable growing pockets in Maharashtra reported floods and waterlogging in vegetable-sown fields. As a result, 15-20 per cent standing crop is estimated to be damaged this year.

“The arrival of vegetables to mandis is 10-15 per cent lower in September when compared to the same time last year,” said a senior official at APMC, Nagpur.

Sriram Gadhave, president of the Pune-based Vegetables Grower Association said: “We cannot expect vegetable prices to decline as steeply as the past years because of estimates of lower production.”

“The uneven distribution of rainfall has impacted standing vegetable crops. The shelf life of vegetables may also reduce due to high moisture in crops that were harvested early,” said Gadhave.