Another bull run on D-Street; Sensex, Nifty at new peaks

On the other hand, HCL Tech, M&M, Dr Reddy's, Asian Paints, Bajaj Auto and Bharti Airtel were among the laggards.

Equity indices darted up for the seventh straight session on Monday to close at fresh lifetime highs as investors remained in risk-on mode despite a bearish trend overseas.

IT, bank and metal stocks witnessed hectic buying, while profit-taking in pharma and auto counters capped the gains. 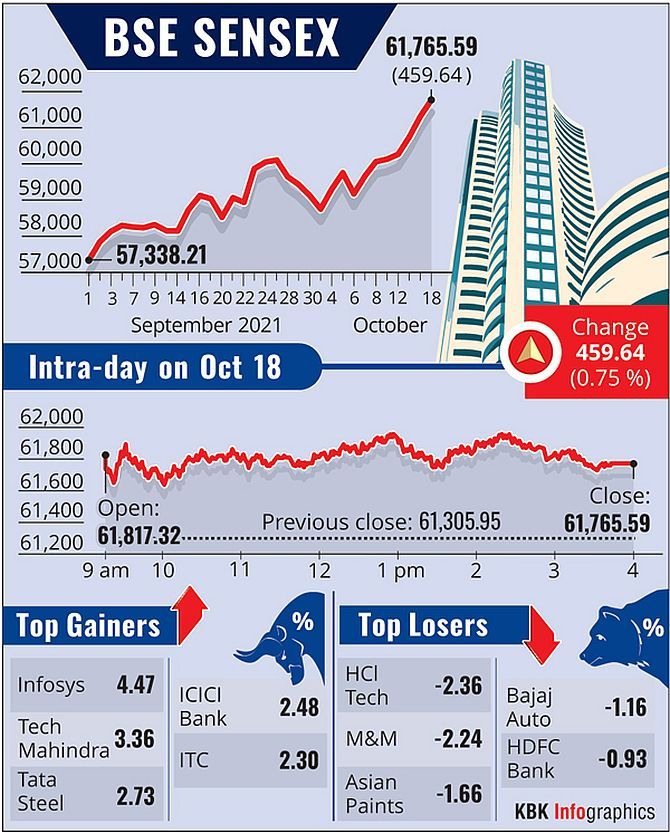 On the other hand, HCL Tech, M&M, Dr Reddy's, Asian Paints, Bajaj Auto, HDFC Bank and Bharti Airtel were among the laggards, slipping up to 2.36 per cent.

"The domestic market traded at record highs withstanding the weak trends in the global market due to disappointing Chinese GDP numbers and global inflationary pressure as a result of energy shortage.

"Chinese GDP grew by just 4.9 per cent during the July-September quarter owing to lower-than-expected growth in industrial activity.

"However, the trend in the Indian market was bullish as PSU Banks, Metals, IT and Energy stocks took charge of the rally," said Vinod Nair, head of research at Geojit Financial Services.

"On the sectoral front, shares of metal companies were in focus on rising base metal prices amid higher demand expectations," he added.

Sectorally, BSE metal, utilities, power, basic materials, IT and teck indices rallied as much as 4.31 per cent, while healthcare and telecom ended in the red.

Broader BSE midcap and smallcap gauges climbed up to 0.95 per cent.

Elsewhere in Asia, bourses in Shanghai, Seoul and Tokyo ended with losses, while Hong Kong was positive.

The rupee ended 9 paise lower at 75.35 against the US dollar on Monday, tracking stronger greenback against key rivals overseas and rising global crude oil prices.