Amartya Sen was the other Presidency alumni to win the Economics Nobel.

Banerjee won the 2019 Nobel Economics Prize along with two others - his wife Esther Duflo and Michael Kremer on Monday "for their experimental approach to alleviating global poverty."

Banerjee on Monday expressed their pride and happiness over him being named a joint winner of the prestigious award.

Indian-American Abhijit Banerjee, his French-American wife Esther Duflo and Michael Kremer were declared winners of the Nobel Prize for Economics on Monday. 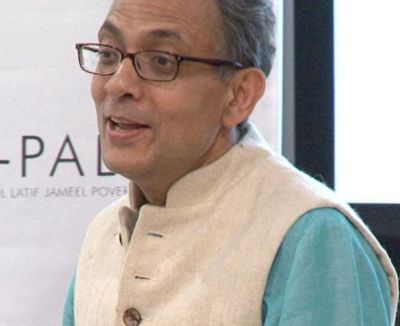 He said Presidency feels happy that two of its alumni members - Amartya Sen and now Banerjee have been chosen for Nobel in Economics, for their works.

"Banerjee had been a member of our mentor group and has always offered us valuable suggestions about the Economics department ... Whenever he visits Kolkata he makes it a point to visit his alma mater with which he is still associated," Konar said.

Anjan Mukherjee, who taught Banerjee at the Centre For Economic Studies and Planning, JNU, said he has sent his former student a congratulatory email.

Banerjee had pursued his masters in Economics from JNU.

"He (Banerjee) was a very good student, among the best that we have taught. We always expected that he would go far and he did.

"There are not too many teachers in India who can say that they have produced a Nobel laureate. All of us at the Centre for Economics Studies and Planning can proudly say so," he added.

"Prof. Abhijit Vinayak Banerjee, a JNU alumnus (MA in Economics, 1983) wins Nobel Prize (together with two fellow economists) for contributing towards alleviating global poverty. JNU is proud of his achievement. Our alumni are torch bearers of JNU. We are proud of them," he tweeted.

Banerjee had then gone on to study in Harvard University and received his PhD in 1988.

In 2003, Banerjee founded theAbdul Latif Jameel Poverty Action Lab(J-PAL) along with Duflo and Sendhil Mullainathan and he remains one of its directors.

The authority of South Point School, of which Banerjee was a student as a youngster, too expressed happiness and pride.

"This is a matter of pride for us. His feat will inspire the students," said Krishna Damani, the spokesperson and trustee member of the school board.

"The students of South Point will be thrilled when they will think Banerjee had walked on the same corridor, and took notes from the same black board as a student of the school," he said.

Banerjee had passed the Higher Secondary examination from the institute in the 70s.

Damani said the students, faculty and non-teaching employees of the school will send a congratulatory mail to Banerjee when the school reopens after Puja vacation on Tuesday.

West Bengal Education Minister Partha Chatterjee conveying his wishes to Banerjee and his wife Esther Duflo, who won the Nobel Prize for economics with him, said this is a defining moment for the state as he has been declared a winner of the prestigious award after Amartya Sen.

"We are also happy that he had been named as a member of the Presidency University mentor group by the West Bengal government five years ago."

Banerjee is currently the Ford Foundation International Professor of Economics at the Massachusetts Institute of Technology.

The Presidency Alumni Association said in a statement it takes enormous pride in the selection of Abhijit Banerjee as one of the recipients of Nobel Prize for Economics 2019.

"An alumnus of 1978-81, Economics, (Presidency College) Banerjee is the second Indian recipient of the Nobel Prize in Economics, after Amartya Sen, both students of Presidency College, now an University. We heartily congratulate him and his wife," secretary, Presidency Alumni Association, said in the statement.