India is a culture of oral communication. It, perhaps, explains the quick adoption of the audio-visual medium. We learn by hearing, and these mediums enable that easily, says Madan Sabnavis. 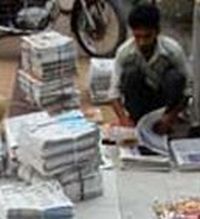 I was recently at an awards show which showcased the best in print advertising. Interestingly, little of the awarded work was stuff that one had seen.

Clearly, large print campaigns that we are exposed to regularly — and there are a lot of them in newspapers and magazines — aren’t rated highly in terms of creativity by industry pundits.

It’s different for television, where much of the ‘creative’ work is also the most popular and visible. Why is this so?

Clearly, in the last two decades, with the advent of television, the focus on print has changed. It has moved into being a last-mile medium — to providing urgency, and the information that triggers a purchase. Brand-building has moved to television, with its power to tell stories with emotions and at ease.

The birth of national TV has also redefined the print medium into becoming one for local inputs. Layer on this the belief that consumers have shorter attention spans, and this leads to the belief that people pay less attention to this medium — and hence it must be treated accordingly.

All this has reduced the level of creative focus on this medium. Loud fonts and colours typify print ads — that’s the way to be noticed.

Interestingly, simultaneously, the print medium continues to grow in India. This is not surprising in a country which is becoming more literate and educated.

Reading the newspaper is a symbol and reaffirmation of literacy; papers get and will continue to get patronage from new readers. In a society where English is a passport to progress (notice the growth of English-teaching schools in small towns), the English newspaper is an aspirational product to bring home (and read). Even for the “classes” — the educated — the print medium has seen a renaissance in popular culture.

Just as cinema and TV serials have exploded, so too has the world of books — fiction and non-fiction. Many people (Chetan Bhagat, Amish and Prakash Iyer are examples) have given up full-fledged careers, or manage multiple careers, to communicate their ideas and theories through stories and books.

Many of these books may have limited sales and readership.

The form, too, could change over time from paper to digital. But the influence of the written word seems to be returning in a big way.

It is postulated that the average length of a book today is longer than what it was two decades ago — indicating that, if a person gets into it, he is willing to consume more of it!

Even within newspapers and magazines, it’s interesting to see the emergence of photo features.

They may seem to be an over-simplistic way to communicate with a time-starved audience. For me, it is the emergence of a new language for communication.

Both the written word and the picture have their manifestations in the emerging digital world — e.g. blogs and Instagram — where people are sharing ideas, views and information with static language.

So, while the audio-visual medium has its strengths and fascination, the static language of words and pictures continues to grow and flourish. Further, there is an air of credibility on the static word. Even today, with the pervasive growth of the audio-visual medium, people — professionals and viewers — feel more comfortable quoting the print medium or even Twitter as a statement of authority.

There is definitiveness to the written word.

India is a culture of oral communication. It, perhaps, explains the quick adoption of the audio-visual medium — whether TV in the 1990s or when radio returned in the new millennium.

We learn by hearing, and these mediums enable that easily. Yet, the written word (and picture) has its own place. We still need our appointment letters in writing. Major events — marriages, parties — are still documented by photographs rather than videos, even though videos have been around for almost two decades now.

It’s the human ease of consumption and the personalisation of this static format that gives it an engagement that is different.

To my mind, static media also allow the viewer to absorb information at his or her own pace, unlike audio-visual media which dictate the pace.

This perspective has interesting implications for brand-building and communication.

There is an emerging cynicism about advertising. And with it, a shortening engagement time with communication about brands — simply because consumers have less time to spend with anything that isn’t of great interest to them or that is intrusive. We are moving into a world of “influencers” beyond celebrated experts and media opinion-makers.

The internet is putting the power to influence others into the hands of everyday experts. Finally, the world is coming a full circle — in India, marketing is going back to regional and local. All these factors portend well for both print and the static word/picture language of communication in the digital world.

Traditional print has the ability and power to make a big difference to some (the opinion leaders) and all (the larger world) if used creatively!

The recent BJP campaign has been much celebrated. What’s visible to most of us has been the big TV ads that gave air cover to the brand and message.

However, what was equally (if not more) influential was the local press ads the brand took out in each market.

At a ‘thematic’ level, they addressed local issues relevant to that market and thus made BJP as close to the consumer as the most local, regional party.

Closer to the date of voting, the messaging changed to urge people to go out and vote — saying even one vote could ‘make a majority’. Appearing on the front page of the morning newspaper gave the message both stature and urgency!

The time has come to return print to its proper, glorious place in the world of creativity. Popular culture uses it as a medium to influence and promote new ideas.

Brands and advertising are very much about that, too — seeding new thoughts and, through those, seeding new behaviours.

Print’s credibility, and its power to give readers control of how much time they spend, makes it a strong medium.

Creativity can help to enhance it and ensure the consumer consciously spends time on it. It is intrusive – but through creativity, can seek the consumer’s permission to stay on it! Something worth thinking about.