'Post Independence, it is for the first time that people have Rs 500 in their pocket, but the family is sleeping without food.'
'In the prime minister's adopted model village, Jayapur in Varanasi, no banks are working.'
'People have put their slippers with their names in queue and left.'
'They will come back when the banks start working.'
Just imagine what will be the condition of other villages in India.' 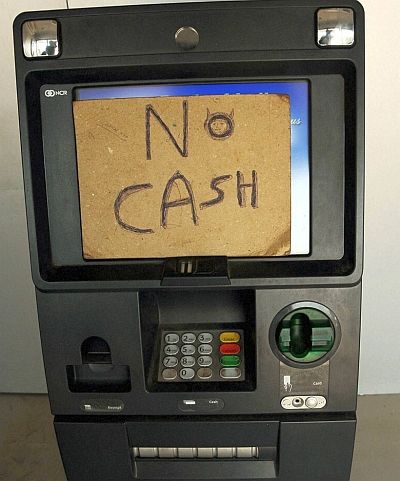 The queues outside banks and ATMs have been growing ever since Prime Minister Narendra Modi decided to demonetise Rs 500 and Rs 1,000 notes to tackle black money in the country.

Though the long wait under the hot sun has made many people impatient, many don't fault Prime Minister Modi's 'surgical strike' on black money hoarders.

Do you believe that demonetisation will help the economy?

The economy has been in crisis for a long time because of many reasons. Those in the corporate economy and trading economy have been generating black money.

How does this relate to demonetisation?

The price of pulses went from Rs 56 to Rs 220 in the last 10 months. Who pocketed that profit? The black marketeers and black money hoarders!

And, thus, unless and until the government keeps a check on price rise you will not be able to stop black money.

If the government cannot control hoarders, black marketeers and futures (commodity) traders, they will not be able to control black money.

So the question is: Is Modi serious about this? The answer is 'No'.

He wants to take action by this demonetisation move. What is the logic? You ban Rs 1,000 notes and bring in Rs 2,000 notes. It does not make any sense.

The only way you can control black money is by controlling the prices.

(Interrupts) The Congress and the BJP (Bharatiya Janata Party) have failed to give their accounts to the income-tax department and the Election Commission for the more than Rs 7,000 crore (Rs 70 billion) which is in their kitty.

The I-T department is asking these parties: Where have you got the money from?

According to the rules, the I-T department has a right to ask the political parties about donations over Rs 20,000 received by them.

It can ask the name of the donor, her/his address. But the BJP and Congress have not submitted these details for the last five years.

The late H D Shourie, BJP leader Arun Shourie's father, had appealed in the Supreme Court that political parties must give details of their accounts, and there is a direction from the apex court too.

We, the CPI, have been giving the details to the I-T department and Election Commission since 1991.

The Congress and BJP are saying they are clean, but why have they not given their bank details?

They are not doing so because the political process generates black money.

Politics has become a parking lot for black money.

In 1978, demonetisation achieved nothing. Today, 1,000 tonnes of gold is imported every year. Where does it go? Does the government know about it?

But there is demand for gold and if they are importing it, so what is wrong in it?

Wrong or not is up to you to decide. Don't you think this generates black money?

But they have transparent systems on the stock exchanges.

Who is standing in the line outside banks today? There is chaos in India today.

Why was the government not prepared earlier?

In this country, post Independence, it is for the first time that people have Rs 500 in their pocket, but the family is sleeping without food.

Which class is getting affected the most by demonetisation?

Farmers are the worst affected. They sold their paddy just now and they have Rs 500 and Rs 1,000 notes.

In rural India, people have the mentality of keeping money in their homes and that has now become chunks of paper.

In rural India, in the vicinity of 5 km, there's hardly a bank. Where will these farmers go?

Co-operative banks are in a shambles and nationalised banks have only one outlet every 5 km.

In the prime minister's own adopted model village, Jayapur in Varanasi, no banks are working.

People have put their slippers with their names in queue and left. They will come back when the banks start working. And the BJP says this is an ideal village.

Just imagine what will be the condition of other villages in India.

In eastern UP, not a single ATM is working and even banks do not have money.

The government says it had been preparing for the last six months. Do you feel it failed badly in the execution?

I am raising an interesting point. Finance Minister Arun Jaitley says they worked for the last six months on demonetisation. It means they must have already printed the money much before because you cannot print so many currency notes overnight.

It takes 3, 4 months to print so many notes and if you check the new currency notes, you will find the signature of Urijit Patel, who was the Reserve Bank of India's deputy governor then.

RBI governor (Raghuram) Rajan's last day in office was on September 4, 2016. So it seems Urijit's signature was already there on the note when Rajan was RBI governor.

Also, the BJP put Rs 1 crore (Rs 10 million) in its bank account in Kolkata on November 8, a day before the ban. This means that selective people were informed about this move.

Do you smell a conspiracy?

These are the questions that the government has to answer. Prime Minister Modi made an emotional speech. He is trying to copy Indira Gandhi.

The day before her death in Bhubaneswar, Indira said, 'Khoon ka mera antim boond tak desh ki hifazat ke liye hoga (I will work for the safety of the country till the last drop of my blood).'

Don't you think it is good that farmers become part of the banking system?

This is the Rabi crop season. Farmers cannot purchase seeds and pesticides.

This is a big crisis. They have money in their pocket through the sale of paddy and they cannot use it.

Nobody is willing to touch farmers' money. This demonetisation will lead to a crisis-like situation.

Every day our soldiers are getting killed on the border, but now that issue has got diverted from the eyes of the people.

No one in the media is reporting it because he (Modi) is saving his skin by trying to shift the attention from that crisis.

Why do you think Modi undertook demonetisation? After all, there is a genuine concern over black money.

He is using this move because he knows that if he has to get re-elected in 2019, he must have Uttar Pradesh with him.