'The BJP certainly has an edge as the BJP has gone ahead of the Congress in pleasing the trading community.' 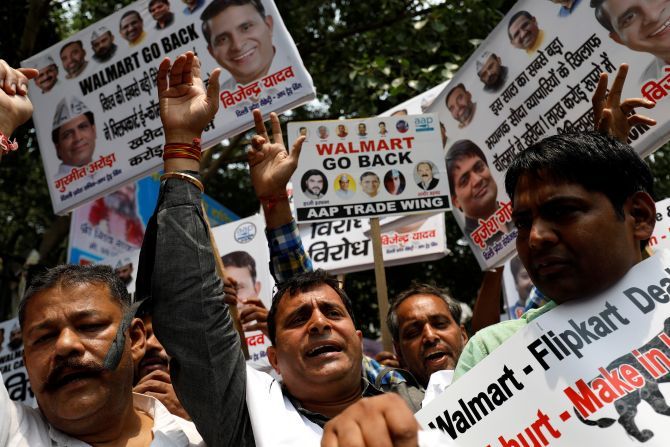 Earlier this month, 200 leaders of the Confederation of All India Traders from 26 states met in Puducherry and said traders would play a crucial role in 195 Lok Sabha seats this election.

The trader leaders said the trading community would group together as a vote bank and vote for the party that would address the problems India's traders face.

After the BJP released its Sankalp Patra, the CAIT said it was happy that the BJP had finally listened to their long-pending demands.

"The BJP has succeeded in garnering the support of the trading community by including our issues in their manifesto," Praveen Khandelwal, below, secretary general, CAIT, tells Rediff.com's Shobha Warrier.

After the Puducherry meeting, you said traders would play a major role in 195 Lok Sabha seats all over India. Was the meeting organised to find out the kind of influence traders have in the election?

You must understand that traders are the only community present everywhere, in every nook and corner of all the parliamentary constituencies in India.

Even in the remote areas where it is difficult to go, our traders are there to cater to the needs of the people of that area.

It is the largest network of trading community across the globe.

So, traders are in a better position to influence voters.

Another interesting statistics is 40% of the 30 consumers every day are new entrants.

You mean, traders can influence people of a particular area..

Absolutely. You have to understand the fact that there are over 7 crore (70 million) traders across the country. Around 30 crore (300 million) employees are dependent on these 7 crore traders. This number does not include their family members.

This 37 crore (370 million) people are the largest vote bank in the country. That's why we feel traders play a very crucial and vital role in any election if it consolidates itself into a vote bank.

This is what we want to do in the election. We have conducted a campaign called 'One Nation, One Trader, 10 Votes' for the last three months. This campaign included workshops, seminars and conferences across the country.

We saw an overwhelming response to the campaign from the trading community. The truth is, traders all over the country have been feeling cheated because many core issues concerning us have not been addressed at all. This neglect has been there for the last one decade.

I would say, neither the governments nor the political parties found the need to have the trading community in its priority list.

Did demonetisation and GST affect the trading community in a negative way?

No. Certainly, traders felt many problems in the initial months of demonetisation, but as soon as cash flow returned, problems faced by traders were solved.

Most traders in India are dependent on cash even now.

In the case of GST, we submitted many memoranda again and again to the government and the trading council.

Finally, our voice was heard and now the rates of more than 200 commodities were toned down. Also, the GST tax structure was simplified and rationalised.

So, now GST is also not a big issue.

How responsive was the BJP to the traders's demands?

Though our many issues were taken care of by various ministries, no priority was given to traders.

Traders are supposed to be the BJP's core supporters. Does that mean traders are no longer with the BJP?

That was before the BJP released its manifesto. From our side, we had released a charter of our demands and waited for all the political parties to respond to our demands.

We also made clear that the party or parties which accepted our charter would get the support of the traders.

We went through the Congress manifesto and we found that they had totally neglected the trading community. They summarised traders's issues in two points: Abolition of e-way bill and introduction of a one point GST.

They also said that new businesses did not need permission in the first three years, which is not possible as traders were governed by several rules and regulation passed by Parliament.

Unless amendments are passed, it will not absolve traders from the responsibility of obtaining licenses of permission. You said the BJP had been neglecting the trading community...

I think the BJP has realised that keeping the core supporters in good humour is essential for the party. We are happy that most of the crucial issues were taken care of in the manifesto.

They have promised to set up a National Traders Welfare Board and a National Policy for Retail Trade, and provide accidental insurance of Rs 10 lakh to every trader registered under GST, pension for traders, and also a Vyapari Credit Card on the pattern of a Kisan Credit Card.

Above all, promise to simplify GST by consultation with stakeholders to rationalise GST tax structure.

Setting up of a Farmers Producer Organisation will definitely boost the sentiments of the trading community engaged in agricultural products.

Naturally, the traders are happy.

Of course, e-commerce and FDI in retail are yet to be dealt with. We will continue to work with the BJP so that these issues are also given adequate importance.

Overall, the BJP Sankalp Patra is good for the trading community.

It is for the first time that any political party has given such weightage to the trading community.

You had said because traders were looked upon as BJP supporters, other political parties ignored traders...

It is a fact. Other political parties kept a distance from us as traders were perceived as core supporters of the BJP.

It became difficult for us as the BJP was not giving us any importance and other parties were keeping a distance from us.

That is why I said we felt like orphans.

Now that the BJP's manifesto talks about your issues, has the feeling gone?

Yes, the BJP has come forward to handhold the trading community. Let them implement these promises. Only after that, the feeling will go.

Which way will the 37 crore trading community vote?

We are waiting to hear the response to our charter from other political parties also. Then, we will decide who to vote for.

This time, traders of India will vote collectively.

I admit that the BJP certainly has an edge as the BJP has gone ahead of the Congress in pleasing the trading community.

Do you feel the BJP has now realised the mistake of not taking their core supporters along with them?

I will not call it a mistake; it is for the BJP leadership to say anything on that.

But I will definitely say the BJP has succeeded in garnering the support of the trading community by including our issues in their manifesto.

What kind of feedback are you getting regarding the election?

In general, there is a perception all across the country that in the given circumstances, Modi can deliver things in a better way in comparison to his opponents.