'When it comes to efficiency measures TCS will bank on a right mix of projects, skill sets, and methodologies like agile, experience levels as well as adopting more collaborative technologies.'
'Because of the softness last quarter, we decided to moderate the variable pay aspirations for the top 10 per cent of our employees.'
'We are running a business, so we will have to see the revenue uptick and demand is coming through.' 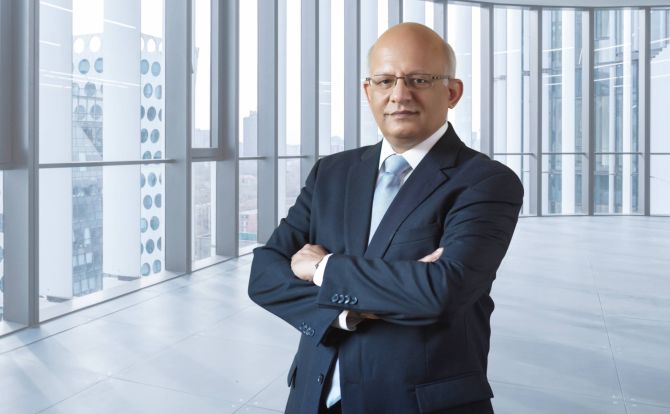 Its margins also contracted, mostly due to an appreciating rupee and wage costs.

The company's Chief Operating Officer, N Ganapathy Subramaniam, tells Romita Majumdar how the currency hardening took TCS by surprise and yet it was able to kick in efficiency levers, including offering moderate variable pay to the top 10 per cent employees.

He says the banking, financial services, and insurance (BFSI) verticals will continue to do well even if a few areas such as capital markets stumble due to management changes across the banking sector. Edited excerpts:

Currency played a major role for you in Q1 impacting the profitability. What happens if rupee continues to strengthen against dollar?

We were a bit surprised by the way currency hardened this quarter as everybody had expected it to depreciate.

We hear that it will strengthen further and that is a challenge that we’ll have to work on.

We are working on a number of efficiency initiatives that have been able to help the margins.

At the same time, we did not want to lose out on the demand.

So, we have sent offer letters to 30,000 people and 40 per cent of them have joined in Q1 and the rest will join in this quarter.

Secondly, we are also embracing more automation within the organisation to stay relevant to our aspirational margin bands.

What kind of efficiency measures have been brought in?

It can be the right mix of projects, skill sets, and methodologies like agile, experience levels as well as adopting more collaborative technologies.

Further, because of the softness last quarter, we decided to moderate the variable pay aspirations for the top 10 per cent of our employees.

We are running a business, so we will have to see the revenue uptick and demand is coming through.

And when we do well, we'll also get a better variable pay.

When we don't do well, we decided 90 per cent of the employees will get their variable pay (as planned).

The BFSI segment is still stumbling. Is it a cause of worry?

The softness in capital markets segment was called out last quarter and it has only accentuated further this quarter.

It is very difficult to predict when it will end.

Otherwise, there is no structural weakness in BFSI.

If you do a search, you will see a long list of banks that have witnessed top-level management changes in the past four months.

Whenever there is a change in leadership (at client organisations), some rethinking will happen.

Leaving aside capital markets, other aspects such as retail, corporate, payments, and wealth management are all growth levers.

Specifically, in Europe and the UK, everybody thought that Brexit would be done by this time and interest rates would increase.

But that didn't happen, so their revenue projections are falling behind and spending is controlled.

You announced many deals with several airline companies lately. Is any particular business focus happening here?

We are working with top airlines globally. Travel and hospitality segment is embracing the next wave of digital in a major way.

The customer experience part is being strongly differentiated by the airlines.

On the operational side, better maintenance and shorter turnaround time is something they look for.

It is an industry that is investing heavily while they also face financial challenges.

Where are opportunities coming in communication and media given that there has been considerable growth in this vertical over the past year?

The media and information side of this business are doing well while there are pockets of weakness in the telecom side.

The telecom providers are challenged, but still closed a couple of good deals in this space.

Capital investment on 5G is going to be critical both on telecom operators and equipment providers, and we are tracking them closely.

Our own reading of 5G is that it will be important on the applications side.

So building specific architecture and applications to improve the 5G experience will make a huge difference.

So 5G is important but it is a few quarters away.

Telecom providers are not able to invest that much because they can't realise the ROI on existing investments.

What’s your plan about platforms, and also public sector projects?

Regional markets and platforms will continue to get our focus.

On the government side, the finance minister has announced interoperability of Aadhaar and PAN, and someone has to facilitate that.

She also proposed a multi-use card that can be used to avail of services.

The vision is great, but there’s a need to figure out how it will be done.

Can it be run as a private initiative or partnership?

India is a very ripe place for digital investments. On the platform side, large deals here will take time.

We are now taking our retail banking platform outside India to the US and the UK, while we are looking at Germany and few other markets.