'Urjit Patel was not quite the picture of courage, but even he turned, he had to turn.'
'Perhaps there is something that is far more sinister than what we are aware of, which is the reason for his resigation.' 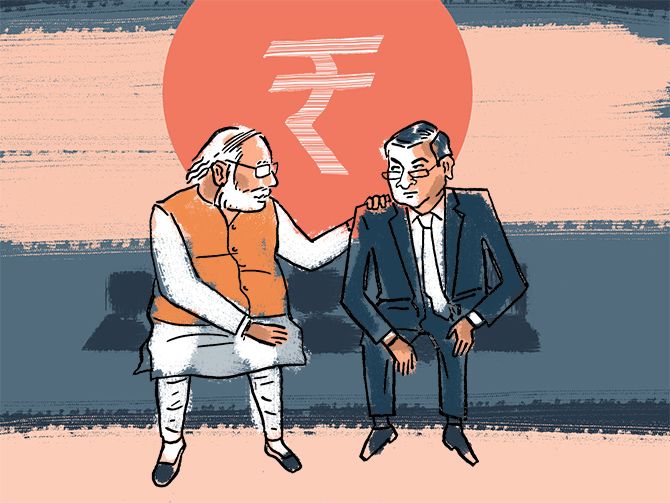 Former Union finance minister Yashwant Sinha was one of the earliest to back Narendra Damodardas Modi as the BJP's prime ministerial candidate. Now, he is one of Modi's most vocal critics. He has just published India Unmade: How the Modi Government Broke the Economy.

"I am hoping to god that Shaktikanta Das will not abjectly surrender to the illogical, illegal, unreasonable demands of this government," Sinha tells Archis Mohan.

You were one of Narendra Modi's earliest supporters. What changed?

I was one of the first to suggest Modi should be the (Bharatiya Janata Party's) prime ministerial candidate. The people gave us a massive mandate after three decades. That was as good a starting point as anyone could have imagined.

On the economy, he was lucky that international crude oil prices dropped so sharply, that gave the government billions to play around with, without raiding the RBI reserves.

Then they messed it up.

I was sorely disappointed by demonetisation, because it was such a silly thing to do, and you advertised the silly approach by replacing Rs 1,000 note by Rs 2,000.

It was writ large that the move was ill-advised and ill thought of.

For me, the number of notifications the finance ministry and the RBI issued almost on a daily basis, as they are doing with GST, was almost the last straw.

I was seeing the terrific mandate being wasted day by day, and the impact of demonetisation was evident when growth rate plummeted in 2017.

One of your chapters is titled 'Hail Caesar! Modi's Style of Functioning' and another 'Pradhan Mantri Attention Deficit Disorder Yojana'...

Whosoever whispered in his ears that go for it and this would be the outcome, misled him, and he did not have it in himself to be able to see that this may not happen, especially after he had created the infra for converting black money into white through Jan-Dhan accounts.

I have mentioned figures in the book of how many billions were deposited in Jan-Dhan accounts (during that period). All the money came back. So he must have felt cheated, and that gamble did not pay off.

That is again Modi's style of functioning. He takes decisions himself.

The title of another chapter is 'GST: Gayi Sarkar Teri Taxation'...

On GST, I felt particularly distressed because I had carried out lots of reforms in the indirect tax system, and ultimately settled for only three rates -- merit, demerit, and mean.

I had also clearly indicated my desire to move to a single rate, and I was told at the time that 90% of all indirect tax revenue, we were collecting, came from (what was to be the) mean rate.

Merit and demerit rates were only contributing a small sum, and that one could move to one single rate.

Now, some finance ministers after me tweaked the rates here and there in terms of certain products, but the basic merit, demerit and mean rates stayed.

If only the FM had asserted his leadership in the state FMs's meeting, as far as GST is concerned, we should not have more than three rates. He could have said something we can convince the people about, and most of the items could be placed in the mean rate.

They could have also have said ultimately we shall move to one rate.

Now, Modi has famously said you cannot tax milk and Mercedes at the same rate. What he forgets is indirect tax as an instrument of social justice is not used in any country in the world.

It is the direct taxes where you can tax those who earn more. It was a mistake that we decided GST was an instrument of social justice. It was hurriedly made, no leadership was provided to state finance ministers.

Some of the solutions to address farm distress are short-term, such as farm loan waiver and MSP.

I am saying, make a beginning with farmers. I have even calculated that if we started the band from Rs 12,000, as in Rs 6,000 per crop season, and limit it to Rs 18,000 then, on the basis of the number of farmers we have, it will be around Rs 2 trillion per year.

If it is divided in 70 to 30 ratio between the Centre and states, the Centre's liability will be a little less than 1 per cent of the GDP.

Considering we now we have an expenditure budget of Rs 24 trillion, Rs 2 trillion will be small percentage of that, and we could find the wherewithal to have Rs 1.3 trillion from the Centre and Rs 700 billion from the states.

Then, give a one-time loan waiver up to a certain amount, say Rs 100,000 or Rs 200,000. We want the farmers to begin on a clean slate, have a reformed crop insurance scheme, and provide expert advice to farmers, extension services, which have unfortunately stopped.

Finally, something that (agriculture expert) Ashok Gulati has been saying, remove all restrictions on sale of all farm produce, which would mean APMC amendments, which will mean trade policy amendments, and unless there is an emergency don't tell the farmer you can't export.

How do you see Urjit Patel's resignation and Shaktikanta Das's appointment as Reserve Bank of India governor?

I think Urjit Patel, to begin with, was not quite the picture of courage, but even he turned, he had to turn.

I don't think the last word has been said yet, perhaps there is something that is far more sinister than what we are aware of, which is the reason for his resigation.

As far as Shaktikanta Das is concerned, his tenure in the finance ministry was not one of the brightest.

One does not know with what intellectual equipment he will handle this new job, but I am hoping to god that he will not abjectly surrender to the illogical, illegal, unreasonable demands of this government.

How would you deal with the problems of NPAs?

We should divide the bad debt in three or four parts. One, we should separate those where the entrepreneur is not at fault, since you didn't acquire land for him, give him forest clearance, or other clearances, so his project stalled and bank loans he had taken became NPAs.

Second, where the bank and entrepreneur were hand in glove and loan was given to entrepreneurs who are just not competent.

Find out these kind of entrepreneurs, take the business away and that is what the Insolvency and Bankruptcy Code is doing.

Third, deal with willful defaulters, who have taken money and misused it, as you would deal with any criminal.

I had tried to do it in this way when I was finance minister, and also set up Asset Reconstruction Companies, or ARCs.

So, there could be a set of steps which could be taken, but you have to apply your mind.

You have to sit up until 12 midnight and apply your mind, and stop bothering what is happening in the CBI. The FM need not bother about that.