'The economy of Kashmir has collapsed.' 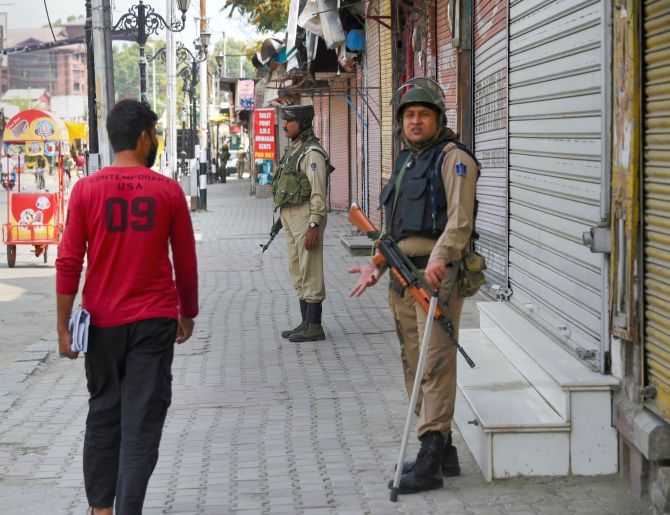 With the restoration of Internet in the 10 districts of the Kashmir region from January 19, the region's economy is back in focus.

A Preliminary Economic Loss Assessment Report released by the region's apex business unit, the Kashmir Chamber of Commerce and Industry has estimated the economic loss at Rs 17,800 crore or more than $2 billion between August 5, 2019 and December 3, 2019.

While the travel and tourism and manufacturing of handicrafts sectors have contributed the maximum to this loss, other sectors affected by the Internet shutdown, security clampdown and arrests of Kashmiris include the agriculture, horticulture, real estate and construction sectors among others.

"Four lakh people in the 10 districts of Kashmir were jobless during the time there was a ban on the Internet, the clampdown and arrests," says Sheikh Ashiq Ahmad, president, Kashmir Chamber of Commerce and Industry, the apex business organisation in the valley.

"How quickly do you think a patient suffering for more than 30 days will recover if he gets medicine on the 31st day? You have to see how much harm has come the patient's way in the last 30 days before knowing how long it will take for the patient's health to recover," Sheikh Ahmad, below, tells Prasanna D Zore/Rediff.com.

What kind of losses have the 10 districts of Kashmir faced because of the Internet shutdown?

We have lost anywhere between Rs 4,500 crore and Rs 5,000 crore because of the Internet shutdown since August 5.

Our export-oriented industries have suffered a huge blow. Our exports have declined by 62 per cent.

Handicraft items like silk carpets and shawls to the European Union and USA have come to a complete standstill.

The last five months, especially the period prior to Christmas, were the peak season for these exports and we lost that entire season.

We had more than 50,000 people going for Umrah (pilgrimage to Mecca undertaken by Muslims) who could not go owing to the ban on the Internet.

The Internet is the backbone of tour operators sending people to Umrah. Getting visas, ticketing, everything is done online. They were deprived of the infrastructure. The Internet connection to these tour operators was restored only two days ago.

The Internet is very vital for the growth of the hotel, tourism and travel industries. Though the advisory issued by the central government was taken off, who will visit a place that has no Internet connectivity?

First, they gave an advisory on August 3 that every tourist should leave. Then in October they issue an advisory saying tourists can visit Kashmir. But how many people have actually come after that?

What is the kind of drop in the number of tourists?

(The region saw) almost 90 to 95 per cent drop in the number of tourists coming to Kashmir after the advisory.

Our hotels are almost vacant. Ask any friend or family you know if they will prefer going to a place where the Internet is blocked? The first impression tourists get if the Internet is shut down is that the situation is not normal in Kashmir.

Thousands of boys and girls who were employed in logistics businesses related to the e-commerce portals were without jobs.

What kind of job losses has Kashmir seen since August 5?

It is a chain. If the exporter doesn't get orders, the manufacturers don't hire weavers and artisans associated with the carpet and shawl industry. There are no work orders coming from anywhere.

In the last five months, more than 50,000 workers employed in the export-oriented industries were jobless.

If tourists are not coming to Kashmir, the hotels, restaurants and transportation business employees face unemployment.

Four lakh people in the 10 districts of Kashmir were jobless during the time there was a ban on the Internet, the clampdown and arrests of people belonging to civil society, the business community.

The economy of Kashmir has collapsed. Based on the 2017-2018 GDP of the Jammu and Kashmir Economic Survey, the state has lost anywhere between Rs 17,800 crore to Rs 18,000 crore in the last five months in the 10 districts with a population of 55 per cent.

I can see an economic collapse happening due to the Internet shutdown, clampdown on businesses and restrictions. 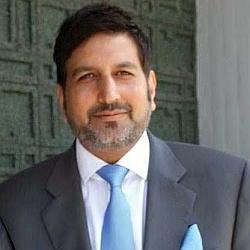 Do you see the situation improving now that Internet connectivity has been restored?

How quickly do you think a patient suffering for more than 30 days will recover if he gets medicine on the 31st day?

You have to see how much harm has come the patient's way in the last 30 days before knowing how long it will take for the patient's health to recover.

The Internet is a basic right in the 21st century. I think the Union government shouldn't have taken this long to restore connectivity.

How is the Union Territory administration reacting to this economic collapse?

Whenever I meet any government official from the UT or the central government, I tell them that the duty of the government is to undertake the welfare of the people associated with the businesses who have suffered. They should immediately come out with an economic, commerce and trade policy for the region.

The lieutenant governor has plans to make Kashmir an 'economic paradise'. Is that possible given the political situation in the valley?

I have never been a pessimist in my life. If the intent is good, everything is possible.

You have to first tend to the businesses whose backs have been broken because of the Internet ban and clampdown in the valley. I would look forward to policies that do not ignore the businesses that already exist.

However, this business meet organised by the lieutenant governor was just a curtain-raiser and I would like to focus more on other pressing issues at hand.

Do you expect investors to flock to Kashmir?

They (the administration of the Union territory of Jammu and Kashmir and the central government) are making an effort towards that end, but one can't say anything at the moment about how much money will come into the region.

We will soon, Insha Allah, be unveiling the economic and business vision of the KCCI.

We have become a consumer economy and our efforts will be on making Kashmir a self-reliant region in poultry, livestock farming and agriculture.

The KCCI has already started a programme where we are encouraging our young girls and boys to set up their own basic industries and plan to become a manufacturing hub of non-polluting products.

Do you think buying of land by those outside the Union territory of Jammu and Kashmir could lead to problems for investors given the opposition of the people of the Kashmir valley towards purchase of land by outsiders?

The (central) government is not clear on this issue.

Every day there are certain demands from Jammu region that ask for bringing in a Domicile Act in place that would safeguard the ownership of land to the locals as well as secure jobs of the locals.

Even the people of Jammu region are apprehensive about selling their land to outsiders.

As far as investments in industrial belts are concerned, even when Article 370 was in existence, the then state government of Jammu and Kashmir would offer land to investors on a long lease of 99 years.

Even today the same mechanism for allocation of land will take place.

Nobody stopped this (method of allocation of land to set up industries) earlier, nor will anybody stop it if it happens tomorrow.

How is the administration responding to your pleas?

I have met Union Commerce and Industry Minister Piyush Goyalsaab with a business delegation from Kashmir; I have, in person, met Lieutenant Governor G C Murmu.

In the one-and-a-half hour meetings with these officials I have explained how Kashmir's economy is on the verge of collapse.

The minister and the lieutenant governor have assured us that they will look into our grievances.

Let's see what they bring to the economy now. They have to take a call. We have done whatever we could do to highlight the plight of the businesses in Kashmir.

How long will it take for these 10 districts in Kashmir to get back to economic normalcy?

If there is no concrete policy soon, the region will further suffer economic hardships. You can see more non-performing assets coming from this region in the days to come.

Those young boys and girls who we encouraged to become entrepreneurs had taken loans from various lenders. Now, since the businesses have been shut for the last five months, their EMIs (that were to be paid to the banks and other lenders) too have taken a hit.

Banks's policy doesn't give a moratorium on interest paid and these business people have to anyhow make their loan repayments. Those who cannot make payments have stopped paying their EMIs.

To set the record straight, we have already released a report about the losses to the industry and economy. As the head of the business community I say it is the duty of the government to come out with a plan to help revive the economy in Kashmir.

The ways and means at the disposal of the Union government are beyond the imagination of the common man and it can work (economic) miracles if it wants to.

Did you get any assurances about compensation to be paid for these losses by the UT administration or the central government?

They have assured they will look into the issue and come up with a plan. In the absence of any solid plan for revival of business in the Kashmir region, I don't see a very good future for businesses here.

The feedback I am receiving from business across these 10 districts is we are nearing a collapse.

How do you look at the future of business in the region?

As a businessman I can only say that I have no other option, but to get back to business. It will only help if we don't face any more difficulties and challenges we have already faced.

What would you like to say to Prime Minister Narendra Damodardas Modi and Union Home Minister Amit Anilchandra Shah?

The economic condition of Kashmir is not good at all. Adopting and implementing a humane approach is the need of the hour.

We appeal for early release of people belonging to the business fraternity who have been detained for no reason as a preventive measure. There are some five business leaders under arrest.

There is so much of public pressure from our fraternity for their release. The shopkeepers whose children have been arrested complain that they can't focus on business when their children are under arrest.

My appeal to the PM and home minister is that before the 26th of January, all these people should be released.