'The household sector, which is still the largest contributor of financial savings, has been experiencing a decline in the last six years, and it has fallen below 8% of GDP.' 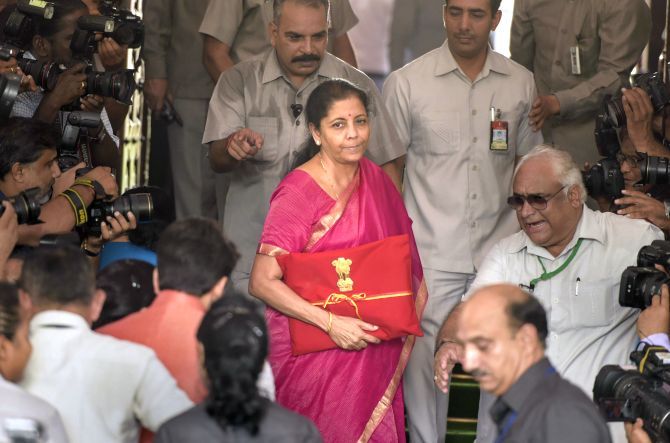 A fortnight has passed since Finance Minister Nirmala Sitharaman presented the new government's first Budget, and experts are still not sure if it will kickstart economic activity in the country.

"More than Rs 9 trillion are locked in tax disputes in 2017-2018. We need urgent reforms to tackle this crisis. If we resolve and recover even 1/4th of such disputes, the government would be in a better position to tackle the shortfall of revenue, " Dr Krishanu Pradhan, below, assistant professor at the Madras Development Studies, tells Rediff.com's Shobha Warrier.

Prime Minister Modi wants India to be a $5 trillion economy by 2024. Do you think the Modi Sarkar 2.0's first Budget will take India towards that goal?

It doesn't require first or second Budget to take the Indian economy to the $5 trillion mark. It is the outcome of the compounding growth formulae.

Given the nominal value (not real value which comes after adjustment for price level) of estimated GDP in 2019 at $ 2.972 trillion, the compounding growth formulae requires nominal growth rate of 11% to 12% per annum in taking the economy to $5 trillion mark by 2023-2024. That means it will take just 5 years to add an additional $2.1 trillion.

To add an another $5 trillion to the economy -- taking the economy to the $10 trillion club -- it will take another 6 years, and so on.

Therefore, the Modi government's 2.0 Budget should be viewed whether it can help the economy to grow at a rate of 7% to 8% per annum.

In that respect, there is not much to be celebrated in the Budget.

Many people say the Budget is more like a vision document or an Independence Day speech than a typical Budget. Do you feel so?

Normally, it reflects the wishlist of the government for the next 1 or 2 years.

However, over the years, especially after the demolition of the planning commission in 2014, the policy focus of the Union government can be understood from Budget documents. There are several instances where major reforms were announced outside the Budget.

In this respect, the Budget document is neither a vision document nor an Independence Day speech.

As per the Economic Survey, India was growing at less than 6% in the last couple of years. Will this Budget create buoyancy in the markets and spur growth?

To create buoyancy in the market and to spur growth, you need high domestic savings and investments.

In India, the household sector, which is still the largest contributor of financial savings, has been experiencing a decline in the last six years, and it has fallen below 8% of GDP.

There is no concrete policy to encourage household saving in the present Budget.

The inflow of foreign direct investment is not encouraging as the net FDI was around $44 billion last year.

The question is, from where is the investment going to come? But there is no answer in the Budget.

So growth will remain subdued in the absence of domestic savings and investments.

That is one criticism of the Budget, that the government is relying too much on foreign money to accelerate growth. Are you worried about a repetition of what happened in Asia in the 1990s when foreign money left those countries in a huge financial crisis?

Tapping the foreign markets to finance government budget deficit has both merits and demerits.

The merit is that the government can borrow at a lower rate of interest than borrowing domestically.

This will not only help private players to borrow at cheaper rates from foreign markets, also the competition for limited domestic savings between the government and the corporate sector would ease.

Since the external public debt to GDP ratio is around 3%, the government has some elbow room in tapping foreign markets to borrow in longer maturity and reduce the interest liabilities which consumed around 27.5% of tax revenue in 2015-2016.

However, this should not be seen as a permanent solution or substitute for adequate domestic savings.

Moreover, it should not exceed more than 0.5% of GDP in a year, because higher external debt would create significant repayment problems in future due to persistent current account deficit resulting in large accumulation of external liabilities for the country as a whole and resultant depreciating pressure on the rupee.

The repayment risk can get aggravated on account of any external shocks like the 2008 global financial crisis or sudden reversal of flow of foreign investment as happened in the East Asian economies in the late 1990s.

Therefore, going forward with the idea of borrowing in foreign currency needs lot of precautions.

The government is planning Rs 70,000 crore for the recapitalisation of banks. Do you think this will kickstart a cycle of lending by banks and therefore economic activity?

The figure mentioned in the Budget is grossly inadequate to clean the balance sheet of the PSU banks.

It is not that banks are not interested to lend.

The demand for credit from the corporate sector is stagnant due to inertia in industrial production, stalled projects and tepid growth in exports.

As a consequence, the overall credit growth in the economy is very low and it hovers around 6% per annum in the last 4, 5 years.

Therefore, PSU bank recapitalisation by Rs 700 billion is grossly inadequate to clean the balance sheet of the PSU banks and spurt economic growth. Do you think private players in India will have the confidence to start investing now that the government is talking about recapitalisation, labour law reforms, etc?

It will take a few more years to create and sustain the investment cycles in India.

Recapitalisation to some extent would help the PSU banks to repair their asset positions and start fresh lending.

Would the private players come forward? Not likely, because the private sector is already suffering from unutilised capacity and stalled projects.

Unless the animal spirit of the private sector comes in through augmentation of domestic consumption, some tangible prospects in the rural economy and revival of the informal sector which suffered heavily due to demonetisation, labour law reforms or the small scale bank recapitalisation would have very limited impact.

Is it good to rely on private players to make all the investments while the government plans to concentrate on the social sector?

Due to stagnation in economic activities and with very low tax to GDP ratio, the hands of the government are really tied.

Government investments are required in the social sector as well as in providing national level public goods like the railways, national highways, etc where social returns are higher than private returns.

Given the strained public finance of the central government due to low buoyancy of tax revenue and leakage though loss making PSUs and budgetary support for bank recapitalisation, we don't have much options except privatising persistently loss making PSUs like Air India, denationalising PSU banks and encouraging private investment, not only for physical infrastructure, also for social sector development.

Unless serious reforms in the governance of higher educational institutes take place, a hike in the social sector spending by the government is nothing but drainage of resources.

Given the poor state of educational outcomes, it is difficult to justify higher public spending.

One may argue that public spending on healthcare and education in India is below 6% of GDP, but in absolute terms the Centre and the states together spent around Rs. 8.22 trillion in 2017-2018.

Now the question is, what has been the outcome of such spending?

Without plugging the leakage and improvements in governance of educational institutes, more public spending would be of little interest.

Do you think the government is just redistributing wealth and not creating it?

Redistribution of wealth is certainly one of the important functions of the government due to the prevalence of large scale wealth and income inequality.

It is not simply true that the government does not create wealth. Government creates both tangible and intangible wealth.

The general perception is that the government doesn't create wealth because it is not run like a private entity. Such wealth creation doesn't take place for the sake of the government itself, it is for society.

That is why as a layman we often accuse government of not creating wealth, rather siphoning it from the private sector to support for the poor and buy votes.

Should the finance minister have been spending more money rather than worrying more about the fiscal deficit?

Yes, this should have been an option for the government when private players are not investing enough in the economy.

The government should play a proactive role, even if deficit targets are breached; in investing in irrigation, drinking water, sanitation, agriculture marketing, afforestation etc.

Did you expect more reforms in the Budget or, are you satisfied with the announcements?

Budget documents are not the one-stop solution for reforms. Reforms are continuous and a multi-faceted process.

We need to denationalise some of our weak PSU banks and financial institutes.

We need to close down or sell the persistently loss-making PSUs which are putting a huge stress on the budgetary resources.

More than Rs 9 trillion are locked in tax disputes in 2017-2018. We need urgent reforms to tackle this crisis.

If we resolve and recover even 1/4th of such disputes, the government would be in a better position to tackle the shortfall of revenue, and can spend more on infrastructure investment and social sector development.

Unfortunately, this year's Budget is totally silent on it.