'Karna is the greatest warrior in the Mahabharata -- in fact, Arjuna is a nobody in front of Karna.'
'But Arjuna had a better advisor in Krishna than Karna.'
'Karna failed because he listened to the wrong advice given by Salya.'
'It just shows wrong advisors can land even the mighty in trouble.'
'Illustration: Uttam Ghosh/Rediff.com After Subramanian Swamy and Yashwant Sinha, it was the turn of the Bharatiya Mazdoor Sangh, India's largest labour union affiliated with the Rashtriya Swayamsevak Sangh, to criticise the Narendra D Modi government for lack of job growth and misguided reforms.

According to the BMS, 'the present slowdown is the result of the wrong direction in the economy which is a continuation of what the UPA was doing'.

Are you unhappy with the way the Modi Sarkar has been running the government?

Let me put it this way: If there is any disruption in the economy, or a slowdown, the first to feel it is the labour class. We are the first to get the vibrations.

When did you start getting the signal that something was wrong with the economy?

For the past three years, we have been saying and feeling that nothing has been happening in the social sector consisting farmers, labourers, the BPL (below poverty line) community, the backward community and also the MSME (micro, small and medium enterprises) sector.

Even when you say there has been a change in the lives of many Indians, nothing positive has happened to these people. Their lives are still the same.

You mean even when India was growing at more than 7%, the lives of these people did not change?

Yes, the benefits have not percolated to the social sector. Whatever growth you are talking about has benefitted only the creamy layer.

You mean the government's economic policies benefitted only the corporates and not small businessmen?

If you look at any literature on the Indian economy before 1991, the word 'development' was used a lot, but after 1991, 'growth' replaced the word.

When you use the term 'development', it has an all-inclusive meaning, but not 'growth'. 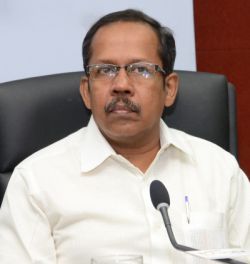 'Growth' is uni-dimensional, helping only a small section of society. The majority are left behind or outside the trajectory.

On the other hand, we feel that the last person in line also should enjoy the benefits of whatever is happening in the country.

But the reality of India is different after 1991, after the new model of reforms, the LPG reforms (liberalisation, privatisation and globalisation).

There is a wrong assessment of the economy by the government because of its wrong priorities and thus, wrong medicines are prescribed for the problems.

Do you feel the Modi government has been following the UPA government's policies?

As far as the labour section is concerned, it is the continuation of the policies followed by the United Progressive Alliance.

There is absolutely no difference between the UPA and this government except some cosmetic changes. Perhaps these people use a different jargon and terminology.

I would say this is UPA 3 as far as economic and labour policies are concerned.

There is no difference between UPA1, UPA2 and this government.

Did you not express these concerns to the government? After all, the BMS is the RSS' trade union wing.

It is not that we have not communicated; we have indeed.

But the problem with the government is it is a grossly misguided.

Those who had advised the UPA government and landed Dr Manmohan Singh in trouble are still advising this government.

The criticism is that the Modi government is advised by those who do not understand the ground realities of India. Do you agree?

Yes. It is absolutely true.

The same economic experts, advisors and bureaucrats who advised the UPA are now misguiding the government.

These people with degrees from Harvard and the London School of Economics are considered divine and faultless, but they do not understand India.

We are not only importing ideology, we are also importing experts from outside.

FDI is considered a panacea for all our economic illnesses.

I will give you an example. E Sreedharan is a legendary expert on the Indian Railways, but is he there to advise this government on the railways? No, he is nowhere in the picture.

On the other hand, we see people who talk blunders like the solution to rescue the Indian Railways is privatisation.

I would say the government has to disown all these advisors.

The problem with the Indian economy is the wrong identification of issues.

When Manmohan Singh initiated the LPG reforms in 1991, they promised three things -- that it would generate employment, there would be growth in manufacturing and we will be highly competitive in the global market and foreign money would flow to India.

Within 10 years, in 2002, it was declared by none other than Montek Singh Ahluwalia, the stalwart behind the reforms, that India was witnessing jobless growth. He admitted this at a press conference in London.

So, there goes the first promise.

One of the shocking revelations by the Economic Survey of 2013-2014, the last year of Manmohan Singh, was that the manufacturing growth in India was one of the lowest since India won Independence, that is from 1947!

Another revelation by the Economic Survey was that the foreign trade deficit was the highest since 1950.

So, all the promises made at the time of the LPG reforms are gone.

Why do you think the Modi Sarkar is following the same economic reforms?

They say there is no alternative to LPG reforms.

You remember the global economic crisis in 2008? It happened despite many economic experts advising giant financial institutions.

Many of the experts who became jobless after the collapse migrated to India and became advisors here!

I do not want to name anyone, but they are occupying very important positions in India now.

They are failed economists following a failed ideology and naturally this country is also failing now.

Of late, the Swadeshi Jaagran Manch and people like Swaminathan Gurumurthy are talking about the need to concentrate on the MSME sector to create jobs.
Why do you think the government is not listening to them?

You cannot expect a politician to be an economist. They have to depend on experts for advice.

All governments run on the advice given by various experts.

When they get wrong advice, only wrong things will happen.

Karna is the greatest warrior in the Mahabharata -- in fact, Arjuna is a nobody in front of Karna. But Arjuna had a better advisor in Krishna than Karna.

Karna failed because he listened to the wrong advice given by Salya.

It just shows wrong advisors can land even the mighty in trouble.

Mr Modi came to power promising millions of jobs. India is a country where millions of youngsters enter the job field every year. What should be done to create jobs?

The government has to realise that the largest employment sector in India is agriculture which provides 65 per cent of total employment.

Then come the micro and small industries which is in a collapsed state now.

Unless you revive these sectors, employment generation will not happen.

The government is saying the service sector is the engine of growth. No, it is not.

That is why we call agriculture the primary sector, industries as the secondary sector and services as the tertiary sector.

Even today, the government has not done anything for the MSME sector.

That's why at our Nagpur meeting, we demanded that the government include representatives from the social sector on the board of the NITI Aayog.

Do you feel demonetisation and later GST are the major obstacles in the growth of the MSME sector?

Demonetisation, GST and digitisation are the three historic steps taken by this government, and there is no doubt about that.

But these three are badly implemented.

GST was implemented on the 1st of July. '

Three months down the lane, all the small traders are crying, unable to solve small problems which can be rectified easily.

Nobody is there to guide them. Their feelings and troubles are not communicated to the government.

That's why we say that the government has lost its communication with the common man. It has to be re-established.

Why is it that initiatives like Make in India, Start-Up India, etc have failed to take off?

In Hindi, they say 'Accha kheer mein kuch kadva dale tho kya hoga? (What if you add something sour to kheer?)' It is exactly like that.

Do you know unwanted labour reforms are part of the Make in India programme?

But in India, even today, labour is considered an obstacle. That's why I said, good efforts are contaminated by ideas like these.

All those in business want labour reforms...

The entire world is talking about Sustainable Development Goals, which is a United Nations sponsored programme.

The ILO (International Labour Organisation) has been proposing it too. But here in government discussions, it is not mentioned anywhere.

They are telling the rest of the world, 'You come and do business here because there are no labour laws here and we have a large army of unemployed people to serve you'.

Is this the way to talk about your own people?

Should the government look at labour with contempt? This attitude has to change.

Our tradition is that of dignity of labour. That's what Viswakarma spoke about.

But there is no respect for labour today and they are living like animals.

All these are products of LPG. That's why we are against LPG reforms.

We have been saying for some time that 23 years of liberalisation has to be reviewed.

We had told Dr Manmohan Singh to come out with a white paper on economic reforms. He didn't do it. Then, he had to leave office.

Now, we are asking the Narendra Modi government to do that. Unfortunately, all these people consider economic reforms as religion.

Is it too late for Mr Modi to correct the mistakes before facing the people in 2019?

Absolutely not. Everything can be corrected and we can move forward if the government takes into confidence those in the social sector.

We demand the people's participation in the government's policy making.

That's the only solution to a large country like India's development.