'If you are selling family silver, and if you are not getting the right value, then what is the point?' 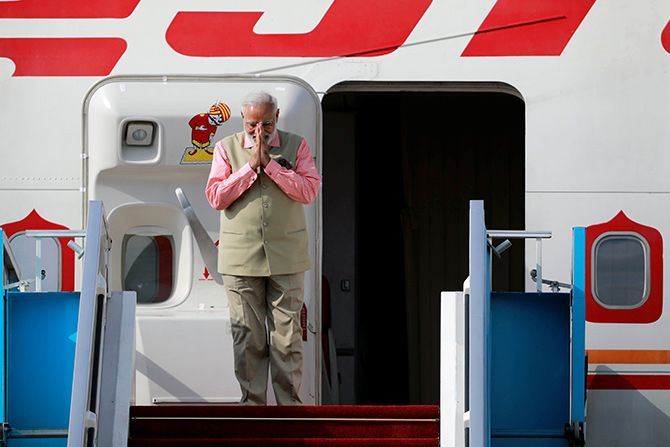 Why is the Congress opposed to the privatisation of Air India?

We are not opposed to the privatisation per se. What we are saying is that the government needs to make up its mind on how it wants to go about it.

Selling one PSU and another just to plug your fiscal deficit is not the solution to the problem.

The government has been speaking in multiple voices on Air India; it's been six years that they have been trying to sell it.

First, they said it was the subsidiaries (that they wanted to sell; the Modi government's first attempt to sell Air India and its subsidiaries like Air India Express), then they said they would break it up.

Now they are saying (they will undertake a) hundred per cent sale.

What sort of narrative is this government building on the sale of India's national airline?

Isn't the Congress happy now that the government has made up its mind to sell Air India 100 per cent, lock, stock and barrel?

Where is the question of being happy or sad? It's not as if we are happy or sad about this.

The proof of the pudding is in eating and we are going to wait till this (100 per cent) privatisation of (Air India) happens.

This government has said these things before and not done it.

How would the Congress envisage the privatisation of Air India?

The government strategy on divestment so far is to use it as a route to plug the fiscal deficit and not to raise revenues.

Look, (if) you are selling family silver, and if you are not getting the right value, then what is the point (of this 100 per cent stake sale in Air India)?

This is an important stake sale; you have to be serious about this.

This government is selling it (Air India) at a deep discount. We should have issues with that because this is stuff that people of this country own.

Why do you doubt the government's intentions? Why do you think the Modi government can't pull it off?

Because it's been six years they haven't been able to pull it off. That's point number one.

The second issue is we haven't heard of one serious player wanting to come into Air India.

When this government first began the privatisation process in 2018, it wanted to sell only 74 per cent of Air India. Now it is inviting bids for the entire stake sale. Wouldn't this attract serious investors?

So, the Congress agrees that taxpayers's money should not be wasted on a loss making enterprise?

Now you are putting words into my mouth. That's not what I said. What I am saying is that the Government of India needs to get serious about the sale of Air India, needs to assess its best value and then open it for sale. It cannot happen just as a means to shore up its revenues.

The seriousness and genuineness on the government's part is lacking.

Would the Congress have an alternative roadmap? Would you offer that roadmap to the government?

We would offer the roadmap to everyone in the government, but they are not seeking our suggestion and we are offering none.

So the Congress believes this government is not serious about the divestment of any public sector enterprise, not just Air India?

The government is selling family silver without getting its real worth and on that count, you are on the same page with Dr Subramanian Swamy, aren't you?

No, I am not on the same page with Subramanian Swamy on anything at all.

You can put it on record. I have nothing in common with Subramanian Swamy. That is point number one.

Don't put words into my mouth. As a responsible Opposition, we believe that if the government is serious about doing it, it needs to show the correct intent; it needs to find the right buyers.

What is it going to do about the (opposition of the) unions; we need to hear about that in its entirety.

What we get to hear is one plan after the other.

Would you give this government another two to three months for this 100 per cent stake sale to reach a material point and then come out with your critique of Air India's stake sale?

I am not going to give this government any time. They had six years to sort out the divestment process.