'We saw people tripping over each other, running, screaming.'
'You could see people running with their daily briefcase despite suffering deep cuts and blood pouring from them.' Alok Churiwala, managing director, Churiwala Securities, a broking outfit, was on the Bombay Stock Exchange (now BSE) trading floor when the bombs started going off in Bombay on March 12, 1993.

He recounts the events of that day to Samie Modak and Shrimi Choudhary.

You were on the BSE trading floor when the blast took place 24 years ago. Can you recall the incident that day?

The first blast happened at the BSE after noon. We were in the 'trading ring'.

As usual, the situation in the trading ring was hectic, with animated conversations all around.

People were running around to execute the orders that come from the main office where the clients sit.

Those were days when we used to operate a system of 'hotlines' between the trading ring -- the actual place where transactions used to take place -- and the main offices in the building, which is where the clients used to sit.

It was a normal day, but suddenly there was a blast, a deafening sound.

The trading ring used to be just above the parking lot, where the bomb had been planted in a car.

The trading ring was adorned with glasses and mirrors.

There used to be a viewing gallery above the trading ring. The gallery had a mirror on one side.

Also, the Dalal Street side of the building had several glass windows.

The impact of the blast was so severe that all the glass and mirrors shattered.

People who were standing close to the mirrors and the glass windows suffered cuts and some were injured severely.

There was an immediate stampede and smoke all round.

In that split second, the mind didn't process what was happening. The impulse was to run.

We saw people tripping over each other, running, screaming.

You could see people running with their daily briefcase despite suffering deep cuts and blood pouring from them.

This one memory is etched in my mind.

How did you react after the blast took place?

I tried to come to our other office in the vicinity. I don't know whether it was the wisest thing to do.

As we came out of the building, we could hear the second blast, another deafening sound.

As we tried to run faster due to the shock, we could see bodies of hawkers lying outside the building.

The entire street outside the BSE used to be filled with hawkers. I managed to run to our other office (less than 500 metres from the BSE).

After reaching the office, I came to know about another blast near the Air India building and then the series of blasts.

Most telephone lines had gone dead as the main hub, in the basement, had got damaged due to the impact of the blast.

My dad was in his office on the seventh floor in the BSE building. They were all safe as their office was higher up in the building.

Those on the top floor thought it was a gas cylinder blast.

Nobody thought it could be a bomb blast as it was the first time in our life such a thing had happened. They, too, decided to evacuate the building soon after.

How was the security apparatus at BSE back then?

The BSE was a fairly secure zone even then.

Strangely, the terrorists got access to the parking space with a bomb-laden car.

How they managed it, we don't know.

We heard stories that their plan was to park the car near the two pillars of the building in an attempt to bring down the entire building.

Fortunately, they didn't get space near the pillars.

Later, consultants said even if the car had been parked near the building, there would have been no danger to the building per se. 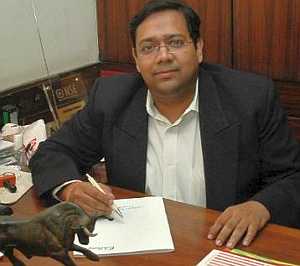 How has the security situation changed from then to now?

No vehicles are allowed in the entire immediate perimeter of the building.

Car parking at the BSE is prohibited.

Time and again, the Mumbai police conducts mock drills. They try to smuggle in a weapon or an explosive.

It is a cat-and-mouse game that the building security has to play with the good guys to ensure safety.

The BSE's security on most occasions has proved to be foolproof.

The BSE is a public building similar to an airport or a railway station, which are, of course, far more stressful.

So there is 24x7 surveillance, people too have become more cautious.

The BSE, which used to be known for the noisy trading ring, now, has a more sanitised environment.

Now, you mostly hear the sounds of computer keyboards clacking.

Was trading halted after the blasts?

The blasts happened on a Friday afternoon. For the rest of the day, trading was suspended.

Later that evening, all the debris and bodies were cleared. The clean-up operation happened the same night.

Sharad Pawar was the chief minister of Maharashtra; he paid a visit to the site.

He told the senior officials of stock exchanges that the government was willing to provide any support needed, but they were to ensure that trading resumed normally on Monday.

'We have to send a message to the world that it is business as usual,' he said.

If trading had not resumed on Monday, the attackers would have won.

They would have been able to send the message that they stopped India's financial market.

Resuming trading after the weekend required a lot of effort from all government bodies -- the fire brigade, the telephone exchange.

How did the markets react immediately after the blasts?

I don't exactly remember. It might have gone down after such a big event. But the talking point of that day was that markets resumed without a break.

Remember, within the financial capital also, the targets were carefully chosen.

The sentencing has happened after 24 years. Do you think it is unusually long?

The oft-repeated cliche 'justice delayed is justice denied' is so true here.

And the mastermind is still cocking a snook at you.

For the sake of history, you might have brought the perpetrators to book.

But if you ask anyone who witnessed that day, I don't think a sense of closure will ever come.

We have only seen talk of bravado from governments of all hues, but none of them showed that kind of resolve.

Do you think those impacted by the BSE blasts were compensated adequately?

The insurance claims for the damaged property such as cars were quickly settled.

There were a lot of nameless people, especially the hawker community, who were impacted.

The blast took place at lunchtime.

The BSE used to be packed with hawkers back then.

In the aftermath of the blast, we never saw a lot of those hawkers come back.

Is there a fear among the stock market community that they would become the target again?

The concept of a trading ring is no longer there.

Technology has decentralised the trading system.

Now, there are growing fears of a cyber-attack.

They might try to immobilise the system, like the WannaCry ransomware attack we saw earlier this year.