'Curbs will again lead to the grey market developing, undoing all the work done over the last two-and-a-half years.' 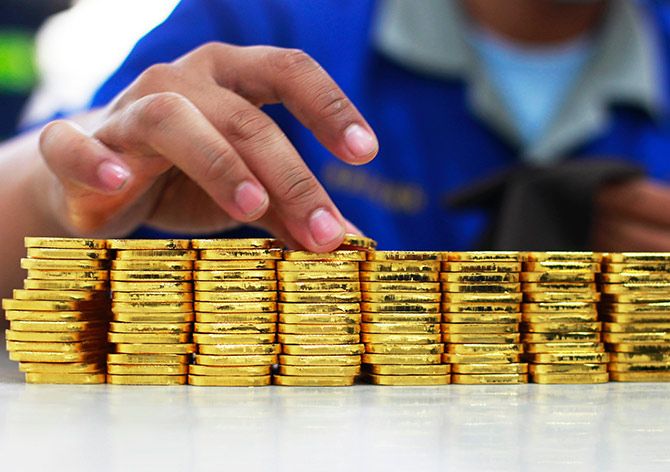 The burgeoning current account deficit has led to reports that the government may again restrict gold imports.

"There is frankly no need for restrictions in the gold segment as the market is already very subdued now," Somasundaram PR, managing director, India, World Gold Council, tells Subhayan Chakraborty.

The government is looking to restrict gold imports and may impose tariffs soon to reduce the CAD. How is the industry reacting to this?

There is frankly no need for restrictions in the gold segment as the market is already very subdued now.

The last time that higher duties were introduced, gold buying was very high. But right now, that is not the issue as gold imports had remained low for months.

The CAD is purely because of oil imports and the fact that the equity markets are experiencing capital outflow.

We hope that such curbs will not take place as it will again lead to the grey market developing, undoing all the work done in the policy space over the last two-and-a-half years.

What are your expectations ahead of the festive season?

Our expectation is that it will remain subdued this year.

The factors are many. The price in India is still much higher than those in the international market as the depreciating value of the rupee had kept prices high.

On the other hand, after the imposition of goods and services tax, the earlier grey market in gold trade is not organised any more and as a result, demand has remained subdued.

So when do you see gold demand regaining earlier levels?

Gold demand is directly linked to increase in income.

As the national income slowly increases, we believe demand will slowly go back to 800 to 900 tonnes by 2020.

Our view is all the transparency measures of the past two years have led to most of the hot money leaving the gold segment.

So, most of the buying that's now happening is organised because of GST and demonetisation.

After these developments, retail trade has become concentrated in the hands of larger players. Where does that leave small businesses?

Steps such as the requirement of a PAN card for purchases has definitely led to organised players reaching the markets a lot more faster. That trend will only strengthen as we go along.

But it's not as if only the organised players of today will benefit. The so called unorganised sector will also see faster formalisation, thereby increasing the overall share of the organised market.

India's global market share in gold has been reducing in recent years. Do you see this reversing soon?

Well, India is the second largest consumer of gold and that continues till now. Our demand, in the past five years was an average 810 tonnes per year.

If you remove from this 2016-2017, the year when most measures of transparency were initiated, the figure rises to 848 tonnes.

Is India's reduced share also due to the business shifting to the spot exchanges in China?

China has been working with exchanges since the beginning of the reforms graph. It started reforms in the gold industry with spot and futures exchanges as well as refiners.

With India, the issue is that we have grown big and now we are struggling with reforms.

A steering committee is preparing a blueprint on spot exchanges and will release it to the government and others by the end of the year.