'You need to devalue the currency, ignite inflation, which then begins to oil the wheels of the economy.'
'Without that this severe recession is not going to reverse.'
Illustration: Dominic Xavier/Rediff.com 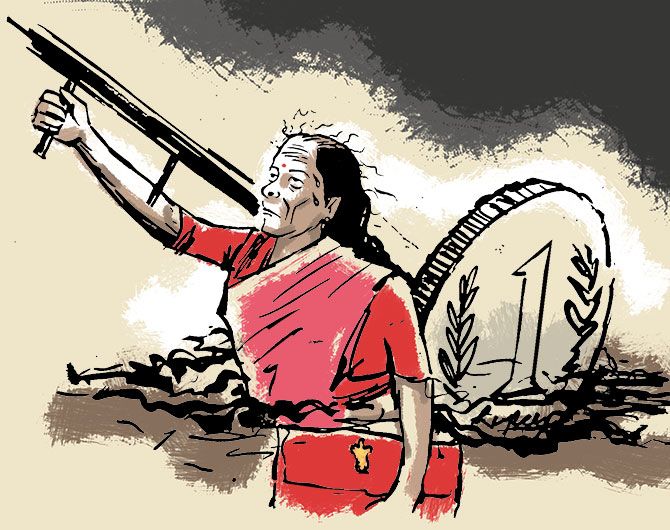 Ace investor Shankar Sharma, in this concluding segment of a two-part interview with Rediff.com, not only paints a very grim picture of the Indian economy, but also explains lucidly, a sledgehammer potion to revive India's manufacturing, exports and consumption.

"The India rupee was at 71 (against the US dollar) in 2013; it is again at the same level in 2019. Take an inflation differential of 4% and in six years that brings it to 24%. By this calculation one is looking at the India rupee at 85 or 90 (against the dollar)," Sharma tells Prasanna D Zore.

Talking about the markets, which space in recent times, after the 10% plus or so drop in the indices, has caught your attention?

The more I look at Indian companies, the less I get enthused about buying anything in India except the stocks which we liked in the last three years, which have been very select small cap stocks and the whole chemical sector.

There are stocks that can give you 5% to 10% to 20% if you wait, but other than that I feel less enthusiastic about investing in India than investing in other markets.

It does look that this slowdown is not normal; there is something deeper at play here.

Large, established consumer companies don't start talking about 'gloomy' outlook just like that. SMEs don't usually cry the way they have been lately.

There is a meltdown of demand across the board: This isn't normal at all. Not a garden variety slowdown. It's something far more serious than that.

This isn't a common cold. It's something far more problematic.

There is a very interesting debate happening in India right now if this slowdown is cyclical or structural.

This (slowdown) is totally structural and I am absolutely clear about this in my mind.

One can fool oneself by calling it cyclical, but it is not cyclical.

Any value picks, like the Amazons, Apples, Netflixs, Dominos that you spotted once and rode the wave as these companies kept adding value to their businesses, in the Indian space? Amazons and Netflixs of tomorrow?

If you follow my tweets, I had said that India is the most innovation-free country in the whole world.

I can go back 25 years and rewind and fast forward it and you find that the same set of companies, the same set of industries, same old-economy businesses like steel, banks and autos are continuing to do the business the same way they had been doing 25 years ago.

Not even a single company, in the list of top 50 companies in India, in the last ten years has broken the mould. Not a single new company!

They are the same tired, old bunch. I must emphasise here that all Indian companies have an inward focus.

How many companies have thought global or built global brands? Gone out and conquered new markets? They have to look outward, right?

How many bikes and cars and tractors and steel plants will you be setting up in a country like India? So, you need innovation to break into newer segments within the country or outside.

Tell me one company in India, whether operating as an IT services company or manufacturing company (that has done this)?

Value will come only out of innovation. Dominos, I liked because they were using smart technology, and not because I like pizzas. I hate pizzas. But that doesn't matter. I don't have to like the product to buy the stock.

I studied the way they innovated the way one can order a pizza. Even if you are in Central Park, New York City, they will come and deliver it to you. That's the level of technology and data they have deployed.

Where do you find a company like Netflix in India, or an Amazon and Apple?

Because you have not built global businesses, have no tech whatsoever, and used capital very foolishly, you have floundered away capital on absurd business models and you are paying a price for it.

Given these circumstances juxtaposed with the slowing Indian economy, do you see more pain in the markets going ahead?

Unfortunately, I see this (stock market correction) as a beginning of a very painful period.

I don't see any silver lining, whether it is policy measure or corporate India doing its bit to convince me otherwise.

There are no magic bullets left with the government or India Inc to fight this slowdown.

We will get sharp rallies once in a while in the markets, but they won't sustain.

What will it take for the government and India Inc to pull their acts together in mending the way the Indian economy -- be it manufacturing, exports, consumption -- is going downhill?

As for policy measures, I am convinced that the only way to mend the economy is to bring back inflation.

There is no way you can reflate an economy without bringing in inflation.

And the only way to ignite inflation is to sharply devalue the (Indian) currency.

When you do devaluation, you will ignite inflation and inflation brings that pricing power to the producers and therefore topline (revenues) of the companies grow.

When inflation goes up from 4% to 6% to 8% to 10%, your nominal GDP growth rises that much and now you are looking at 15% to 16% nominal GDP growth, your earnings growth will rebound to 15% to 20%, export growth will rebound, import substitution will gain pace, foreign direct investments will suddenly flood in, FIIs will flood in because suddenly everything is 10% to 20% cheaper.

When company toplines start growing by 15%, companies will go for salary hikes of its employees by 10%. Consumers will start to get more money in their pockets and that will translate into more funding.

Once corporate topline improves, corporate earnings will improve as a necessary corollary.

This will boost tax revenues immediately.

Just look at what all can be achieved via a sharp devaluation.

You need to devalue the currency, ignite inflation, which then begins to oil the wheels of the economy.

Without that this (severe recession) is not going to reverse.

You are prescribing devaluation of the Indian rupee. By how much should the rupee be devalued to beat this severe recession that India finds herself in?

Take an inflation differential of 4% and in six years that brings it to 24%. The equation is right there, like it or not. That's straight math and by this calculation one is looking at the India rupee at 85 or 90 (against the dollar).

The key is that this should happen sharply.

If you need a bottle of blood to survive and I give you only a drop at a time as a slow drip, then you will not survive.

A single drop or drop-by-drop infusion is not going to work. So, you have to inject this devaluation immediately and not slowly like it goes to 90 in two years.

It has to be a sledgehammer blow; it (the rupee) has to go there (at 90 against the dollar) anyway. Let's do it quickly.

All these measures will work only if you do it like a sledgehammer. But I don't think anybody (in the government) is sitting and thinking deeply along these lines. They are still hoping that things will improve on their own as it (the slowdown) is cyclical.

That is going to hurt us more than this (the current) very, very bad patch.

This government has been an advocate of steep cuts in interest rates to revive the economy by stimulating consumption demand. Do you think this prescription will help improve the economy?

In India there is no correlation between these two things (steep cut in interest rates and spike in consumption demand) like it happens in a highly leveraged societies where interest rates cut do stimulate (demand), because a lot of their spending is by using credit cards.

India is getting there, but is still not there.

It will not happen here that you cut interest rates and the consumers will go out and start spending the next moment just because of a 0.5% cut here and there.

Therefore, this (severe recession) is not about the consumer, but India Inc setting up capacity because of lower interest rates and that is where the problem lies.

The other worrisome thing is that household savings are down sharply and household liabilities are up sharply.

This is a deadly cocktail.

And remember: Consumption is the only leg that's been holding up tottering GDP growth.

If you ask any businessman, and we do meet a lot of them every day, there is a complete fear psychosis and equity capital is not available.

Debt is available, but it has its own problems.

The kind of witch hunt that has happened against promoters who have defaulted -- while some of them may really be frauds, but I don't think everybody who defaulted is a fraud -- but the mindset has become such that anybody defaulting is a criminal and suddenly there starts a witch hunt.

So, most entrepreneurs I talk to are very happy not to put risk capital because by doing so you are not just risking capital, but risking your whole life.

Who wants to lead a life with the CBI or the ED running after you? This has resulted in a dampening of animal spirits.

So a steep cut in interest rates wouldn't address the concerns of the auto and real estate sectors that have seen a sharp slowdown?

At the margins, everything helps but what you really need to do is bring back inflation by sharp devaluation of the Indian currency.

The only money you have, when you don't have money, is inflation.

When you don't have financial bullets, you have inflation and devaluation as bullets

I don't see the government having any other financial bullet to improve the revenue growth which so far this year has been far below the forecast revenue.

It is just not possible. The run rate is out of control, save for these one-time items such as RBI reserves.