'The worst is over, but it may take a couple more years for the banking system to re-establish the growth process.'
'Banks are the major pillars in an economy's revival.''Without banking operations and lending, revival will not happen.' Recapitalisation, mega merger of banks, Insolvency and Bankruptcy Code -- the government is trying many measures to bring public sector banks out of the ongoing non-performing assets crisis.

Will these measures bear fruit?

"Though all of us expect stronger banks emerging after these mergers, there is no guarantee that it will happen. The weaker ones can even pull the stronger ones down! It may not happen but you cannot discount the probability," banker Kalyanaraman P R tells Rediff.com's Shobha Warrier.

When we spoke in May 2018, the government had pumped in Rs 88,000 crores for the recapitalisation of public sector banks, and you had said that it would help the banking sector recover.
More than a year has passed, but the crisis continues.
Once again in this Budget, the government has kept aside money for the recapitalisation of public sector banks. Despite all these efforts, the lending cycle has not started.
Do you feel the NPA problem is more serious than everybody thought?

It appears so. There are two aspects to it continuing even now.

One is, whether the NPA problem was estimated correctly or not.

The second is, the measures taken by the banks to address the issue.

Only when we find the answers to these two questions, will we know whether recapitalisation was adequate or not.

Recapitalisation was done with the assumption that the NPA level would come down slowly. But it did not happen.

It did not happen because of the way bankers approached the issue.

You have to have a positive approach to fight the NPA problem. They should have made proper studies on whether the projects were viable or not, and only after that they should decide on the support of the project.

This was not effectively undertaken by most banks which in turn resulted in more accounts slipping into NPA.

It resulted in credit disbursement not happening and earnings becoming inadequate, thus all banks posting losses. So, the recapitalisation money went into meeting the losses.

How long can the government pump in money to help the banks come out of the NPA crisis?

That's the problem. You just cannot infuse funds every year because of the bad performance of banks.

Recapitalisation is needed, at the same time the focus has to be on the effective running of the banks.

Though the government has made several changes, the public sector banks have not come out of the earlier practices. That is because they are not driven by the motive of profit and accountability.

Accountability has come only in the form of harassment of bankers.

Instead of looking at business risks as business risks, officers were viewed suspiciously and pulled up. Because of this, there is a total apathy towards decision making by bankers. This, in my opinion lead to the current situation.

You mean, bankers do not have the confidence to take a decision and lend even now?

I personally feel that way as I am in touch with the market. The lending operations have not picked up at least at the SME and MSME level.

Yes, some lending is happening in the retail sector. That is only because retail is less risky and bankers are not questioned much on this.

In the case of decision-based lending where judgement is needed at every stage, bankers are now afraid to take decisions.

You worked in a public sector bank for many years. Have you ever come across a banking crisis like this? Is it unique?

With liberalisation, private banks came into the picture, competition started and the concept of banking changed. Though the government brought in many changes, at the decision-making stage, not much change happened.

Until banks are treated as a business entity, and unless they realise that decisions are business risks, the situation will not change.

Though this may not be discussed in the public space, there is a lot of political interference in the banking system. That's why the NPA resolution also is taking its own time.

I have to also admit that there is a lot of improvement now.

When huge corporate accounts slips, it takes a lot of time for banks to recoup from the losses.

Do you think it will take another five years for the public sector banks to come out of the NPA crisis and the economy to revive itself?

It is very difficult to say. In 2008, we thought the crisis would go away in a couple of years, but it went on for many years.

As we tightened the process, more and more skeletons tumbled out of the cupboard.

I think the measures taken by the government, banks and the RBI in the last couple of years show they have realised the necessity to come out of the crisis.

That's why they have tightened the process and majority of the problem accounts have been brought out in the open.

The aim should be to not allow the good assets to go waste.

When the IBC process starts and if there are no bidders, a factory or an asset will remain unused for months and years thus its value getting deteriorated. This will affect the job market also.

If the viable assets are treated properly, the NPA issue will not be a major one.

Of course, banks need recapitalisation. It is not only to tide over the NPA crisis, but banks need capital for further lending.

I feel the worst period is over. But it may take a couple more years for the banking system to re-establish the growth process.

Banks are the major pillars in an economy's revival. Without banking operations and lending, revival will not happen. 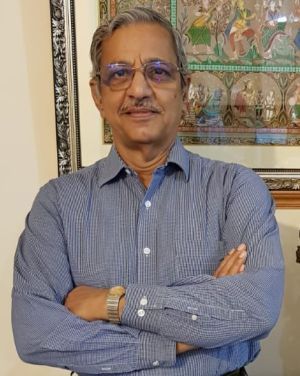 Now the finance minister has come out with a major decision to merge banks. Do you think the merger and recapitalisation together will help banks start the lending process?

Individually, each bank needs recapitalisation for making their balance sheet more comfortable and also to meet their losses and enable to continue the lending operations. This is needed whether you merge banks or not.

Merger is a process which facilitates consolidation.

If you look back, you will see that mergers are nothing new. We have seen mergers in the past too. Even the SBI taking over the subsidiaries is a merger. Before that, some public sector banks took over small private entities which were in trouble.

But rationalisation will not happen overnight; it will take some time.

The government must be expecting the market sentiment to change with the merger of banks. 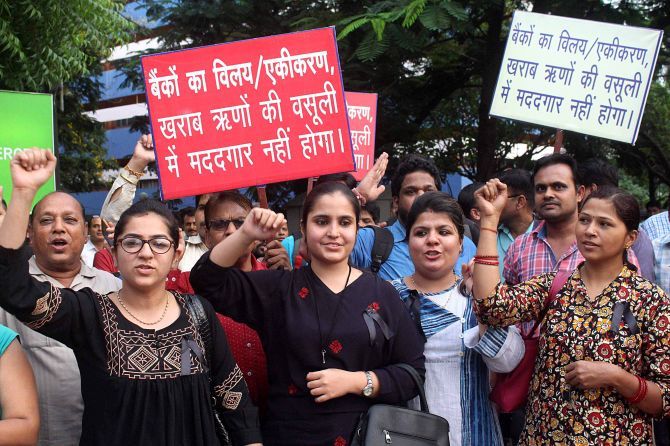 Do you think mergers will have a positive impact on market sentiment?

No, it will not have a positive impact for the simple reason that the consolidation benefits will only be long-term and in the short term, you will not see any benefits.

This time, the government decided to do all the mergers at the same time unlike in the past. I think they want to get over the hiccups in one go which is good.

But it will take at least six months to complete a merger.

What is the advantage for the banking sector to have big banks?

There is no doubt about the fact that there are advantages of having big banks.

From the government's point of view, fewer banks means monitoring their performance is much easier.

It is better to have 12 banks instead of 27 public sector banks as they need to have only 12 representatives.

It is also easier to push policy issues in 12 centres instead of 27 centres.

As far as capitalisation is concerned, it is not going to make much difference.

But when the merged entities start performing better, the pressure on the government to continuously support will come down.

The hope is that we are creating big banks that are stronger.

Are big banks stronger and do they perform better?

Strong and large public sector banks will be able to sustain ups and down better and face international competition.

Banks suffer not only because of judgemental errors, it is market related too.

Bigger banks will be able to sustain the ups and downs in the market. On the other hand, a small regional bank will collapse if that region suffers.

Through mergers, you can improve profitability and cost reduction is one of the methodologies for profitability. Consolidation will result in substantial cost saving as overheads will come down.

Another thing that can happen is, though all of us expect stronger banks emerging after these mergers, there is no guarantee that it will happen.

The weaker ones can even pull the stronger ones down! It may not happen. but you cannot discount the probability.

While the government is trying to increase employment, merger may lead to job losses. Though the government has said there would not be any retrenchments, the fact is there will be a standstill on recruitment in these banks. So, the job market will have an impact.

Is this a calculated risk taken by the government?

Definitely. But once the merger activities start, lending will come to a standstill and recovery will suffer.