Why there is a strong case for RBI to cut rates

A weaker rupee due to rising bond yields in the US and deficient monsoon are hitches. 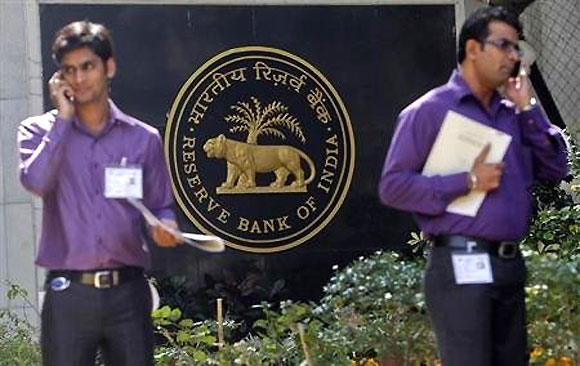 The latest macro economic data and corporate results have led to a concerted clamour for policy rate cuts.

The Reserve Bank of India (RBI) might actually oblige, since the data support the argument. Most traders will be inclined to bet on a cut at the next RBI policy meet on June 2.

If it doesn't happen, domestic sentiment could go into a tailspin.

The argument is simple. Inflation is down, industrial activity is down, corporate earnings are down.

A rate cut could stimulate demand and help revive industrial activity, without much risk of sparking off inflation again.

That was a four-month low, well below the 5.25 per cent recorded y-o-y change in March.

To back this up, the Wholesale Price Index (WPI) -based inflation recorded minus 2.87 per cent y-o-y for April, the sixth consecutive month of negative change for the WPI.

All the retail inflation components seem under control.

Food, by far the largest CPI weight, has dipped to 5.11 per cent y-o-y, about a percentage point lower than in March.

Transport is running negative. Housing costs are at 4.07 per cent y-o-y.

The trendline of the CPI itself has been flat for quite a while.

The Index of Industrial Production (IIP) in March also came in lower.

March was a five-month low for the IIP. Cumulatively, growth across April 2014-March 2015 stands at 2.8 per cent, compared to the previous financial year.

Manufacturing,which accounts for about 75 per cent of the IIP, grew only 2.2 per cent in March. Mining was at 0.9 per cent. Electricity was two per cent.

Overall manufacturing growth for 2014-15 hit 2.3 per cent, while mining saw 1.4 per cent growth and electricity did better at 8.4 per cent.

The IIP was marginally negative in 2013-14, showing a decline of 0.1 per cent in that financial year.

So, the 2014-15 performance does mark a return to a positive trend, but it is still weak.

There was some resurgence in capital goods, which grew 7.6 per cent y-o-y in March.

Net-net, IIP is struggling to pull out of growth recession and shows no signs of sustainable strength.

There is surely a strong case for the next rate cut from RBI.

The central bank has cut twice this year, by a minimum 0.25 per cent.

The repurchase rate is 7.5 per cent - there is plenty of room for more generous cuts.

One is a strong possibility of another deficient monsoon. That could force food inflation up.

But it is a moot point whether a supply-side problem of lower food production could be handled by higher rates anyhow.

Last year's monsoon failure did not result in uncontrollable food inflation because the administration took timely and efficient measures.

RBI might as well take a punt, without too much worry about food. Second, bond yields are rising across the world, even in Germany and the US. That might be a sign of inflationary expectations.

If the US Federal Reserve raises dollar rates in September as many people do expect, the nominal differential between dollar and rupee returns will reduce.

This could mean depreciation pressure on the rupee. A weaker rupee might not be a bad thing. It would stimulate exports, for one thing.

Crude prices have pulled back to $65 a barrel, from January lows of $44.

A rate cut, therefore, seems an odds-on prospect and there is a chance that Governor Raghuram Rajan might make it a bigger cut rather than the minimum 25 basis points.

The banking sector and other financials are likely to move up, so long as the prospect of cuts remains on the table.