'India is growing at the lowest rate in the last decade.'
'If it continues on that path, then the jobs and prosperity that has been promised by this government and on the basis of which it was voted in, will continue to elude us,' says Aakar Patel.
Illustration: Dominic Xavier/Rediff.com 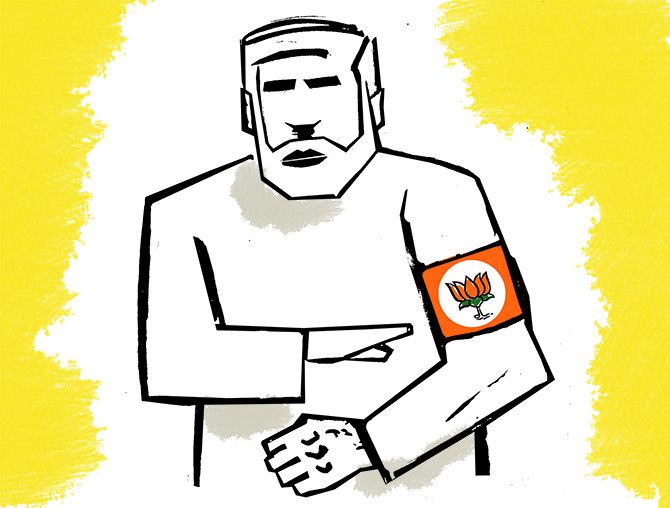 The Gujarat Model was based on a particular narrative. It was that under Narendra Damodardas Modi, there would be a departure from the way that government in India was run.

It would be made more efficient, leaner, less corrupt. The existing bureaucratic apparatus would be mobilised under firm leadership to deliver the results it was capable of, and had not been delivering because of failures of previous leadership.

These results would show themselves above all in economic growth. This is what brought Modi to the attention of the global media (and also national media).

There have been some differing views of what exactly the growth rate was in Gujarat in the period before the BJP period (late 1990s to present) and specifically under Modi.

However there has been no dispute that there was a determination to push economic growth.

When I met him in that period, Modi said he wanted Gujarat's GDP to grow at 15% a year so that India could grow at 10%. He said that seriously, and he meant it.

It cannot be disputed that in this same period there was also a departure in the way that the state was governing its population and its justice system.

The violence of 2002 was never put behind, and Modi was the only leader in India's history to have been in power during a major riot and then remained in power after that.

But through all of this, his stated intent was to provide strong economic growth for 'all five crore Gujaratis'.

It appears to me that this focus on trying whatever was possible to push the economy has gone missing now from the Modi outlook. I hope I am wrong in assuming this, but it is difficult to see it and read it in any other way.

The recent thrust from the government has been on an issue that has not been demanded by anyone and does not help the country in any particular way.

I mean of course the three laws and actions being pursued by the National Democratic Alliance. The Citizenship (Amendment) Bill, the National Population Register and the National Register of Citizens.

The ministry of external affairs made light of the fact that the European parliament tabled a motion condemning the CAA. We were told the resolution is not binding on India and that is true. But the government nonetheless took it seriously enough to try and ensure that the vote on the resolution was postponed by six weeks.

Left unsaid was the fact that this was the first time that India's internal policies were being assessed and condemned by such an important international body.

Other than this effort from India to delay the criticism, nothing was done to protect India from the allegation that it was going down a path that was worrying the rest of the world.

This is of concern because India is dependent on the world viewing it positively so that it can attract global capital. An economy cannot be healthy and cannot grow at optimum rates if the State is at war with a large number of its citizens and views millions of them with suspicion.

The Budget that was announced on Saturday, February 1, did not seem to take the view that there was a problem with the economy. It did not please those who wanted to see some initiative.

This could have come through the recognition that something was wrong and then an attempt at fix it.

India is growing at the lowest rate in the last decade. If it continues in that path then the jobs and prosperity that has been promised by this government and on the basis of which it was voted in, will continue to elude us.

It has become clear that Modi is keen on pushing the ideological aspect of the BJP agenda and much of that has already been achieved.

The three big issues on which the BJP was built were Ayodhya, Kashmir and the civil code. The temple has been gifted to it by the Supreme Court, and Kashmir has been annexed to very little resistance from the court.

The criminalisation of triple talaq has also happened and that means that only polygamy remains to be struck down for the BJP to declare full victory.

Given all of these developments, what is the need for Modi to continue down the majoritarian path?

Why take on a new front, the CAA-NRC, when you have already delivered what you promised you would do in your manifesto for three decades?

This is puzzling given his own history in Gujarat and his ambition for India.

One is awaiting a sign from Modi that the attention of his government and of him personally has comprehensively shifted away from ideology towards the economy.

The Budget that was presented did not send out that message.