'Henceforth, no Indian should fear the taxman'

'We have set out a timetable to reduce income tax rates for all incomes below Rs 50 lakh, and to progressively eliminate the surcharges on income above Rs 50 lakh, by 2024.'
The Budget speech past CII president Naushad Forbes wants to hear.
Illustration: Uttam Ghosh/Rediff.com 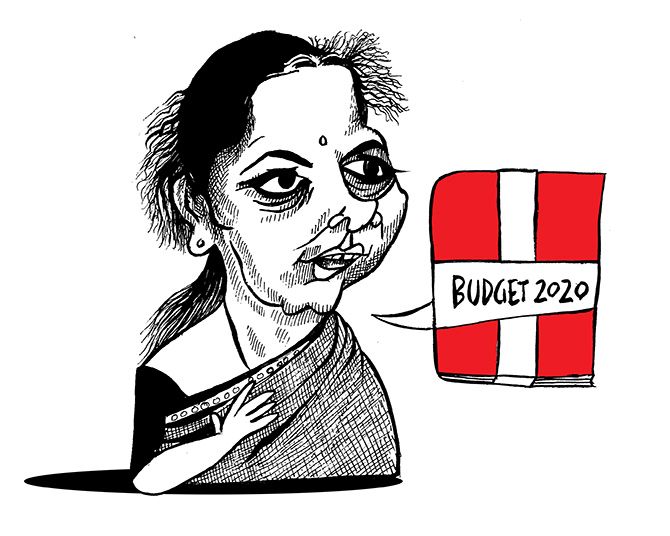 'Mr Speaker, as I rise to present the Budget for 2020-21, I am first greatly mindful of the long-term destiny of our country.

India has been one of the world's 10 best-performing economies in the last 25 years, and we can be for the next 25 years too.

Without question, the current economic slowdown with growth under 5% is the greatest concern of our government, and this Budget takes much further the steps underway to bring about a rapid, deep, and sustained recovery that will seed the sources of growth for the next 25 years.

Second, I greatly miss the presence of my illustrious predecessor, Shri Arun Jaitley.

Arunji was admired across party lines -- he had the uncanny ability to bring out the best in people, and attract the very brightest to work with him, even those of a different ideological persuasion.

So, third, in developing this Budget, my team and I have been inspired by Arunji.

In the national interest, we have drawn on ideas far and wide, including from some of our critics.

Finally, like Mark Twain, I apologise in advance for the length of this speech as I simply did not have the time to write a short one.

I will start with a summary of eight measures to re-energise our economy.

1. Taxation: Tax proposals normally come in the last part of a Budget speech, but our stressed economy cannot afford suspense.

I am making no changes for 2020 in either corporate or personal income taxes.

But I am providing a timetable of reform, to move to a regime of lower tax rates with fewer exemptions.

Following the landmark corporation tax announcements our government made in September, companies are in one of the three tax regimes -- the erstwhile rate of 34% with exemptions galore, 25% without exemptions, or 17% for new manufacturing companies.

We have set out a timetable to converge all corporate taxes to a rate between 15% and 22% by 2023 with no exemptions.

It is my hope that revenue buoyancy will permit a rate at the lower end of that range.

2. Much as I would like to address personal income tax, reducing rates and eliminating exemptions and deductions, revenue considerations do not permit this at the present time.

Here, too, we have set out a timetable to reduce income tax rates for all incomes below Rs 50 lakh, and to progressively eliminate the surcharges on income above Rs 50 lakh, by 2024.

We will simultaneously eliminate the exemption of agricultural income from income tax for income beyond Rs 50 lakh per annum.

3. Tax terrorism: The prime minister himself has often spoken of the scourge of tax terrorism in our country.

I am putting in place legislation that decriminalises all financial offences except fraud.

Imprisonment will only follow criminal conviction in a court of law -- there can be no preventive arrests or look-out notices at the discretion of the tax authorities.

Any tax raid will in future require the personal approval of the revenue secretary and be subject to periodic review by a cross-party parliamentary committee.

Henceforth, no Indian should fear the taxman.

It is time to fulfill our prime minister's vision.

4. The economy needs a serious infusion of liquidity.

The largest debtor in the country is the government itself.

We are creating a public portal to list all dues of the Centre, states and public-sector entities.

The transparency this provides will bring in accountability.

I am simultaneously requesting the 15th Finance Commission to include in its final report a plan to transition the country from cash to accrual accounting.

Future finance ministers may not appreciate being unable to fudge the fiscal deficit, but decent administration demands accurate numbers.

5. Our financial sector has been under great stress of late, and its problems have impinged on the performance of the real economy.

While our public-sector banks are slowly returning to health, the same cannot be said of our non-banking financial companies, whose problems are intertwined with those of the real-estate sector.

All NBFCs with an asset base above Rs 20,000 crore will henceforth be regulated by the Reserve Bank of India.

I am furthermore announcing the setting up of a 'bad bank', specifically to address the solvency issues of NBFCs in the real-estate sector.

I trust our former chief economic advisor will appreciate our use of his idea enough to reduce his criticism of my ministry.

6. Indian industry is second to none.

It has demonstrated its capability to compete with the best in the world.

Tariffs tend to cascade, and lead to demands for more tariffs.

The time has come to decisively address the complete integration of Indian industry with the world.

Henceforth, the maximum tariff for raw materials and intermediate goods is being capped at 5% and for finished goods at 10%.

There are rare exceptions, such as for automobiles and alcohol, which are detailed later.

We further need to facilitate trade with the most dynamic economies of the world.

We are re-engaging with the Regional Comprehensive Economic Partnership negotiations, and in discussion for an early conclusion of the India-EU free trade agreement.

We are further working towards a free-trade agreement with the emerging single African trading area.

7. Employment: Agriculture today employs half our workforce, and tourism has the potential to employ many more millions as visitors seek out our unparalleled cultural heritage.

The success of the Goods and Services Tax Council as an institution pioneered by Shri Jaitley, prompts us to address in a similar manner the coordination issues of the Centre and state by setting up an Agricultural Council and a Tourism Council.

Serious questions have been raised of late on the accuracy of gross domestic product calculations, employment data, and even consumption.

I am calling for an independent committee to review our statistical infrastructure, methodology and governance, to be headed by a former CEA.

I would ask for this review to be completed within six months, and commit to a speedy implementation of their findings.

I trust this brief summary has served to convince members across party lines of our resolve to decisively set in place both the elements of a quick recovery and to lay the foundation for long-term growth.

I now move on to detailing these measures.

I hope the members of this House will note that this time it is only God, and not the Devil, that lies in the detail.'