We should brace ourselves for more bad news in the coming quarters -- on economic output and growth, strains on fiscal deficit, export slowdown, small and micro enterprises in distress, and further accumulation of NPAs in the banking sector, says Rahul Khullar. 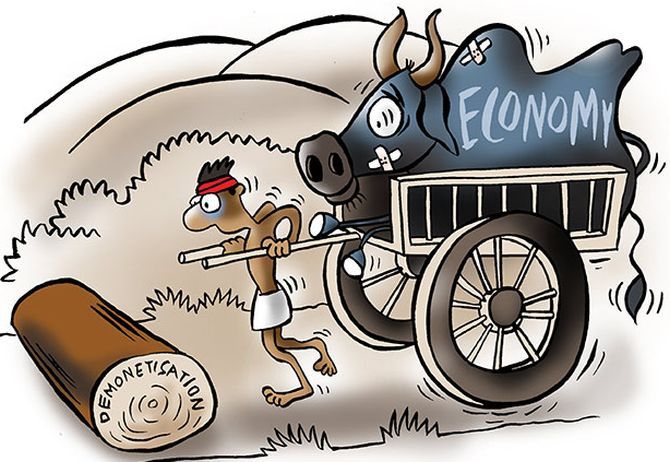 Bad economic news has been pouring since last year.

The finance minister bravely averred that such news should be discounted. The spin’s not working.

A sudden volte-face, and now the government is talking stimulus package. Clearly, all is not well.

How did we come to this pass? First, there was the demonetisation (DeMo) disaster. It did not achieve any of the objectives announced by the prime minister and it wreaked economic havoc.

DeMo led to the foreseeable collapse of economic activity. Worst hit were construction, the entire informal sector, and, of course, agriculture. The lagged effects have resulted in the continuing bad economic news.

Then came the Goods and Services Tax (GST). The real issue was timing. In an article in the Indian Express, I argued that there was a case to stagger implementation to October 1.

This would give businesses time to ramp up their accounting systems and we could test the GST Network (GSTN).

The macroeconomic issues were: How bad would the economic disruption be, how long would it last, and what would happen to revenue collections.

Well, the news is not good. First, the GSTN is under strain; some businesses say that they were better prepared than the government.

Second, the informal sector has taken a second solid knock.

Fourth, revenue targets may not be met; the states are already howling about shortfalls.

The economy has been steadily slowing down since 2014. This was well known to all except those in government who preferred to remain in denial.

Two successive shocks have knocked the stuffing out of any hope of an early recovery. And, the lagged effects of these shocks will reverberate into the next few quarters.

The main components of aggregate demand are consumption, private investment, government expenditure and net exports. These are the “drivers” of economic growth. Well, what is driving the drivers?

Consumption expenditure is the largest component of AD. Its growth is vital to overall growth.

The uncertainty of income and its growth have had an adverse impact. There is increased risk (or perception thereof) of job losses. And, prospects of new employment are bleak. Income pessimism is a reality.

Naturally, individuals are cautious on consumption. Discretionary consumption has been badly hit. Also, factor in the increasing inequality in the distribution of income (Piketty); one more reason for slow growth in consumption.

The collapse in construction has affected jobs, and hence, consumption demand. Ditto for the informal sector.

The rural demand has been hit by both the shocks and the deterioration in the terms of trade for agriculture.

Consumption expenditure as a share of gross domestic product (GDP) declined in the last quarter off 2016-17 and growth has been tepid in the first two quarters of 2017-18.

The festival season notwithstanding, don’t place your bets on high growth in consumption.

Government expenditure has been propping up the growth rate in the most recent quarters. This is not sustainable.

The pro-rata fiscal deficit for the first five months has been exceeded by a wide margin. Future prospects for revenues (tax and non-tax) are cloudy. Of itself, this can cause a breach of the annual fiscal deficit.

A stimulus package, therefore, looks dicey at this juncture. If it is, nevertheless, put through further straining the fisc, be ready for expenditure cuts in the last quarter.

In sum, the prospects for the last two quarters are not great.

The expenditure on net exports also does not augur well. While exports have been growing, imports are growing way faster.

Expect export growth rate to slow down in the coming quarters.

Knowing that rates will rise slowly, these investments have become one-way bets.

The SME sector has suffered the worst: High cost of credit if it is available at all. High interest rates have raised costs for borrowers suffering the pains of a downturn. Result: More stressed assets and new NPAs.

We should brace ourselves for more bad news in the coming quarters -- on economic output and growth, strains on the fiscal deficit, export slowdown, small and micro enterprises in distress, and further accumulation of NPAs in the banking sector.

We are in a bad place; but it looks like it is going to get worse. I desperately hope that I am wrong, but that’s what it looks like.

There has been extensive criticism of the government’s handling of the economy by the press, professional economists, and now, BJP supporters have joined these ranks (Subramanian Swamy and Yashwant Sinha).

Surely, this is a wake-up call for the government to look beyond a mere stimulus package.