Tax, spend and be doomed: A lesson from France

GST will make it easier for governments to spend more, says T C A Srinivasa Raghavan. 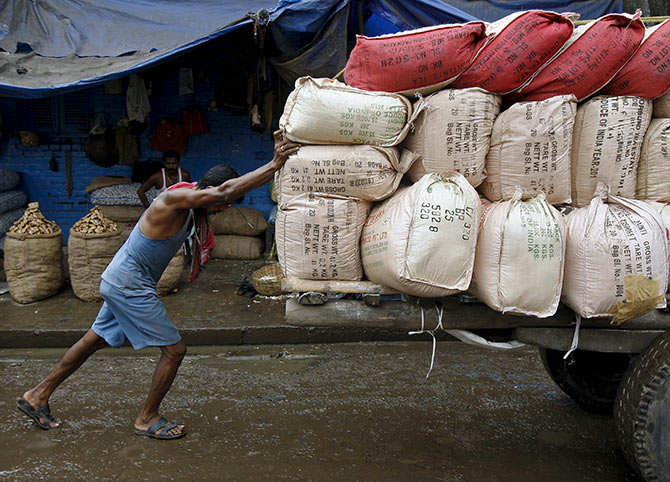 Image: A labourer pushes a handcart loaded with sacks containing tea packets, towards a supply truck at a wholesale market in Kolkata; Photograph: Rupak De Chowdhuri/Reuters

Colbert served as the finance minister for King Louis XIV of France for almost two decades, from 1665 to 1683, and hugely improved the state of French finances. France was almost bankrupt when he took over. His taxation policies also improved the state of French manufacturing. His method was issuing edicts. There was none of the democracy nonsense back then. What Colbert wanted, Colbert took.

His greatest achievement was almost the exact equivalent of the Arun-Palaniappan (two Indian finance ministers who have worked hard for the passage of the bill; one incumbent and the other former, Arun Jaitley and Palaniappan Chidambaram, respectively) goods and services tax (GST) that we will have soon. Annoyed that different provinces in France imposed different taxes and that he could do nothing about it, he more or less equalised them. One France, one tax, one market.

But paradoxically, despite the fillip this gave to the economy, Colbert's taxes left the people poorer than before. The reason: the huge unproductive expenditure on wars incurred by Louis who fought three major wars and countless minor ones. In other words, what Colbert earned, the king spent. The more the king spent, the more Colbert had to earn. And the more he earned, the more the king spent. The geese hissed, until Colbert said in exasperation that the trick lay in fooling the goose that it wasn't being plucked. Fat chance.

Colbert also went after 'black' money mainly by taxing moneylenders. That greatly endeared him to his boss who hated people who didn't pay taxes.

After the fashion of the day, Colbert was also a great believer in what is now called 'crony capitalism'. The deal was simple: you pay the taxes, and in return I will give you a monopoly. Colbert died in 1683 from kidney stones, and in great pain. Apart from his boss and family, no one else felt very sad. He had plucked too many poor geese who possibly hissed with joy.

Within a few years, things were back to where they had been. Not just the people, the State also reverted to its usual state of near-bankruptcy. This happened because revenue policy -- rates and coverage -- was run by a Royal Council. It was something like the GST council now being proposed by Arun paaji.

That council had just one aim: to increase revenues for the king. How the money was spent was not its business. And the king had but one aim: to waste the money.

And, therein lay the problem, of the ever-increasing hissing from the geese, which were not inclined to subscribe to Colbert's view that "it is simply, and solely, the abundance of money within a state, which makes the difference in its grandeur and power." Why only of the State, they asked angrily. How about us?

But, war is not the only way of wasting money. Democracy is, too. In fact, democracy is a permanent licence.

As I had pointed out some weeks ago, the combination of democracy and Keynesian economics has given a free hand to politicians to waste money. They have been aided by liberal do-gooders in this noble endeavour.

When P Chidambaram started expanding the ambit of service tax in 2005, it was to fund Sonia Gandhi's political scheme, the Mahatma Gandhi National Rural Employment Guarantee Act. As a waste of money goes, there is hardly any parallel to it. He also wrote off farmer loans amounting to several thousands of crores. But, Anna, the farmers are no better off today as you keep pointing out in your columns. Many politicians are, though.

Then, there is the structure of our government's expenditure, in the name of the people and the poor. It will ensure that the GST will not be the solution to India's problems that it is being made out to be. Far from it.

Almost two-thirds of government revenue is spent on three things: the salaries and pensions of government employees; subsidies for food and fertiliser; and interest on past debt incurred to pay salaries, pensions and subsidies. The GST will make it easier for governments to spend more on these things. So, you can expect more expenditure under these heads. Democracy is like that only.

When he became prime minister, Narendra Modi appointed an expenditure commission to deal with this problem. Some months ago, it submitted some sort of a draft report.

Nothing further has been heard about it since then. Nor will anything be. So, lie back and enjoy the 30 per cent income tax, 18 per cent GST and 15 per cent sundry taxes.

Or, hiss when some fool of an economist announces that India is poorly taxed.