Not all public sector banks are back in the black, but their collective net profit for the year is Rs 32,346 crore against a Rs 9,013 crore loss in the previous year, points out Tamal Bandyopadhyay. 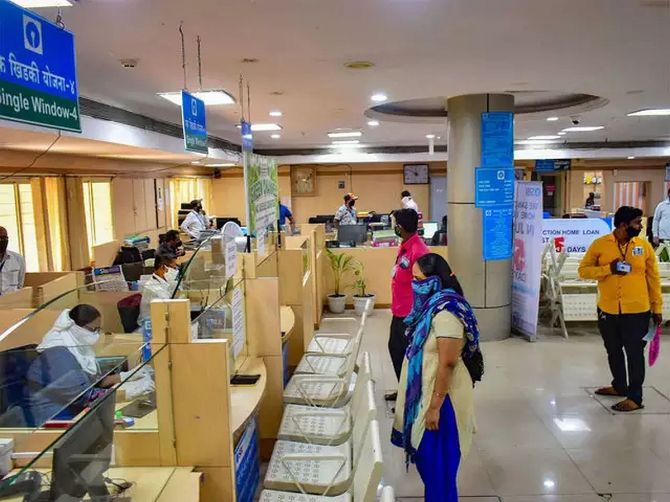 The earning season is over.

It's time to take a look at how the banks have fared in a year when Asia's third-largest economy has shrunk 7.3 per cent.

A year when the loan portfolio of the banking system grew just 5.6 per cent, its lowest since 1965 from when such data is available.

A year when the Reserve Bank of India imposed a moratorium on repayment of loans and allowed banks to restructure loans, and the government guaranteed a Rs 3 trillion emergency credit line to the troubled sectors.

After consolidation, the number of PSBs has shrunk to 12.

Indian Overseas Bank is yet to announce its earnings for the March quarter. In the December quarter, it reported a net profit of Rs 213 crore (Rs 2.13 billion) against a net loss of Rs 6,075 crore (Rs 60.75 billion) a year ago)

For this estimate, I am including yet-to-be-privatised IDBI Bank Ltd in the PSB pack.

The Central Bank and Punjab & Sind Bank continued to be in the red.

Of the rest, five that had made losses in the financial year 2020 have made profit in 2021.

All listed private banks have made profit but five of them, including IndusInd Bank Ltd and Bandhan Bank Ltd, have recorded a drop in net profit.

The PSBs have shown higher growth in their operating profit than their private sector peers.

When it comes to setting aside money for bad loans, the trend is reversed.

Four private banks and five PSBs have made lesser provisions in 2021 than in 2020.

Axis Bank Ltd, Bank of Baroda, Bank of India and IDBI Bank, among others, feature in the list.

Quite a few banks have shrunk their credit portfolio in 2021.

Bandhan Bank has the maximum credit growth (21 per cent), followed by IDFC First Bank Ltd and Catholic Syrian Bank Ltd (around 17.5 per cent each).

State Bank of India's credit growth has been less than 5 per cent, while HDFC Bank Ltd has grown its credit portfolio by 14 per cent and ICICI Bank by 13.7 per cent.

Both Bandhan Bank and IDFC First Bank have grown their deposit portfolio by one-third, RBL Bank by one-fourth, and ICICI Bank and Catholic Syrian Bank by one-fifth.

Bank of Baroda and Punjab National Bank, among PSBs, have grown deposit portfolios the least, 2.2 per cent and 3.2 per cent, respectively.

The growth in the gross NPA pile for the PSBs is close to 11 per cent compared with a little over 9 per cent for private banks.

Private banks' net NPAs have grown 8.4 per cent -- more than double of PSBs'.

Overall, 12 banks have shown a drop in gross NPAs and 13 a drop in net NPAs.

State Bank of India, ICICI Bank Ltd, Axis Bank, IDBI Bank, Bank of India are among those that have recorded a decline in both.

Finally, a look at the NPAs as a percentage of the banks' loan portfolios.

Only three private banks have shown a dip in gross NPAs, but among PSBs, 10 have managed to bring it down.

For a few, the decline is pretty sharp.

State Bank of India has managed to pare its gross NPAs from 6.15 per cent to 4.98 per cent.

At least six banks continue to have gross NPAs in double digits.

Among all listed banks, only two have more than 5 per cent net NPAs -- Punjab National Bank and Central Bank of India.

On the evening of March 24, 2020, India announced a nationwide lockdown to restrain the spread of the COVID-19 pandemic.

Considering what followed, none could have anticipated the show put up by the banking sector in 2021. Is it sustainable?

The RBI's last Financial Stability Report in January had estimated banks' gross NPAs to rise to 13.5 per cent by September 2021, from 7.5 per cent in September 2020, under the baseline scenario.

In a severe stress scenario, these can rise to 14.8 per cent.

Till March, the banks could hold on but not all of them will be in a position to stomach the impact of the second wave of the pandemic.

The next RBI Financial Stability Report is due. Let's wait and see how the RBI is reading the scene.