Of the three major Budget announcements related to the banking sector, privatisation of PSBs is the most audacious, says Tamal Bandyopadhyay. 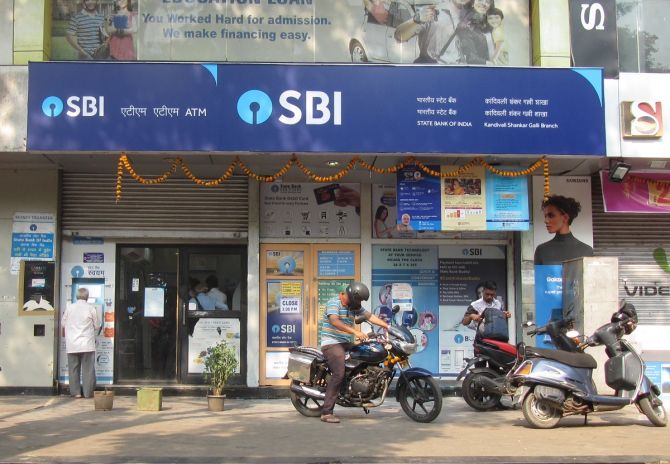 In May 2014, just a fortnight before the Bharatiya Janata Party-led National Democratic Alliance government took over, a committee of the Reserve Bank of India, headed by P J Nayak, recommended incorporation of a bank investment company to take the PSBs out of direct government ownership.

Finance Minister Nirmala Sitharaman has already crossed the Rubicon. The public sector banking industry is no more the holy grail of Indian banking.

Till 2014, the State Bank of India had five associate banks. All of them, and the Bharatiya Mahila Bank, were merged with the nation's largest lender in April 2017. Since then, 13 PSBS have been merged into five, bringing down the number of such banks from 25 to 12 in the NDA regime.

Consolidation brings down the number of banks, but doesn't bring down the State's share in the industry and makes them efficient. The government has finally realised this.

Those who believe the PSBs have done a phenomenal job in nation building, financing infrastructure and spreading banking to the hinterland are upset. Bank nationalisation had a purpose, which has been fulfilled in five decades; some of these banks have now passed the sell-by date. Let's not live in nostalgia.

After nationalisation, the government created a banking department -- an expression of its intent to have a say in running these banks.

Former RBI governor Y V Reddy calls it a joint family approach -- the public sector banks, the government and the RBI became part of a 'Hindu undivided family' where none was keeping a proper account of what they were doing to each other. The transactions among the three were governed by 'plan priorities' -- they were all serving people, Reddy had said.

Another past RBI governor, Raghuram Rajan, has been candid on how the department of financial services (DFS) of the ministry of finance runs the PSBs.

Under Section 8 of the Bank Nationalisation Act, the government -- the majority owner of the PSBs -- can issue directives to the banks in the public interest after consulting with the RBI, but for the DFS, doing this without keeping the banking regulator in the loop has been a habit.

The issue is not the ownership of such banks, but how the owner behaves.

The RBI is the regulator, but the owner calls the shots.

To use a cliché, regulations are not ownership neutral. They are a political animal -- the government's milch cow, used for everything from funding infrastructure to supporting MSMEs; buying government bonds to bridging the fiscal deficit; and for subscribing to electoral bonds to help political parties.

It's also all about targets -- targets first set by the government and then reinforced at different levels in a bank's hierarchy.

Till recently, the quality of lending and recovery has not been as important as achieving loan targets. The market keeps a close watch on the quality of loan assets and punishes the laggards.

But markets are a private bank's headache! The PSBs are not afraid of the market as capital is on tap from the government.

A May 2017 McKinsey India Financial Institutions Practice report hits the nail on the head by pointing out that the smaller the PSB, the bigger the appetite for project financing: 49 per cent of SBI's loans was corporate loans; for mid-sized PSBs, it was 57 per cent; and, for smaller banks, even bigger -- 63 per cent!

Most banks were not a great believer in project appraisal and risk management. They rushed to have a piece of the cake of corporate loans, which they could not stomach.

There are many other issues such as lack of accountability (no bank CEO gets the boot for non-performance); poor pay packet for senior bankers (the MD and CEO salary is linked to the bureaucrats' pay scale since the secretaries in the finance ministry wouldn't like to see the bankers getting more than them); inability to directly recruit young talent from business schools because of various court judgments; the glare of investigative agencies; the so-called L1 formula that requires the PSBs to buy everything, from pen to technology, from the lowest bidder and not the best one.

The list goes on. But the crux is the system of dual control. If we call it a 'virus', the Budget has got the vaccine.

Privatisation of two PSBs is just the beginning. A few more can be privatised, while the few big ones should stay put to address market failures. Their presence is also required for financial inclusion and micro, small and medium enterprises and infrastructure financing.

To serve this purpose, the target for the first round of privatisation should not be those five that have become big post consolidation; the two should be chosen from among the six that have been left alone.

Who should be allowed to buy them out? Do they have enough value?

The 'fit and proper' Indian private entities and foreign institutions, including private equity funds, can be allowed to own such banks. Anyway, they have already been holding high stakes in India's shadow banking system.

A banking investment fund can also be created on the lines of the National Investment and Infrastructure Fund (NIIF) to invest up to a certain limit in the two banks. NIIF is an investment platform that has brought together the Government of India and international investors, looking for opportunities in infrastructure.

Should the existing private banks, and even foreign banks, be allowed to bid for them? Why not? Let them explore. The key to make such a merger successful will be culture and HR practices.

Even the weakest PSB has a great franchise value with a loyal customer base. There will be many takers for a banking licence in the world's fifth-largest economy. The price paid by DBS Bank India Ltd for Lakshmi Vilas Bank Ltd and the interest shown by the prospective bidders for Punjab & Maharashtra Coop Bank Ltd, whose liabilities many times outweigh the assets, bear testimony to this.

Of the three major Budget announcements related to the banking sector, privatisation of PSBs is the most audacious, but the other two -- setting up of a bad bank and a development financial institution for infrastructure financing -- are far more complicated.

More on them later.

Tamal Bandyopadhyay, a consulting editor with Business Standard, is an author and senior adviser to Jana Small Finance Bank Ltd.
You can read his earlier columns here.