I was impressed by his sharp intellect, his ability to connect the dots in understanding complex issues and the way he built a robust rationale for our policies, says D Subbarao, former Governor of RBI. 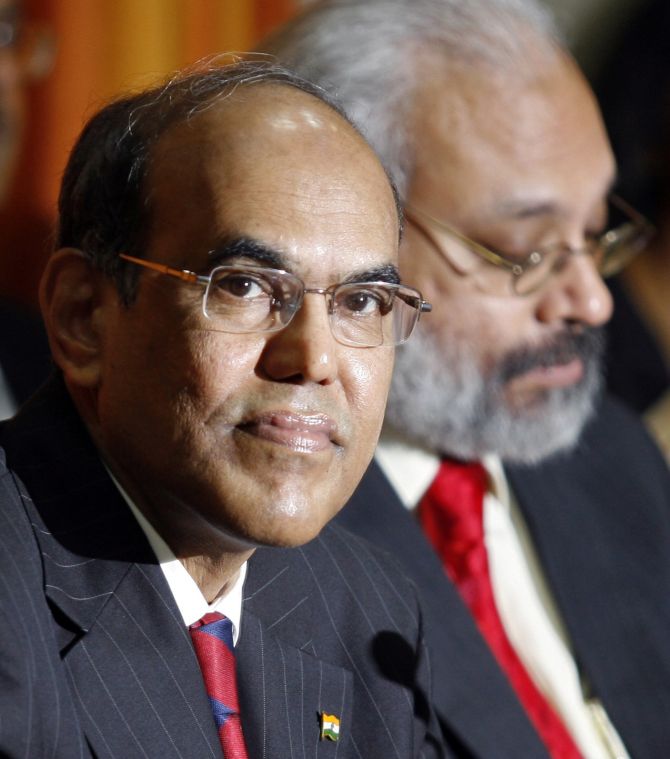 IMAGE: Reserve Bank of India Governor Duvvuri Subbarao (L) next to deputy Governor Subir Gokarn prior to a meeting with bankers before announcing the annual monetary policy at the head office in Mumbai on April 20, 2010. Photograph: Arko Datta/Reuters

Subir never smiled. He didn’t have to.

He could communicate virtually everything with that mischievous glint in his eye - amusement, appreciation, agreement as well as disapproval and disappointment.

He used that glint to great effect to keep me, his boss and colleague in the Reserve Bank of India, on track.

I couldn’t have asked for more. In our years together in the RBI, he proved to be a competent and understanding colleague, and in time became a trusted friend and an endearing well-wisher.

That unsmiling demeanour masked a keen sense of humour.

He once substituted for me at the International Monetary Fund meetings in Washington, accompanying finance minister Pranab Mukherjee.

A couple of weeks later when I met Mukherjee in Delhi, he told me how impressed he was by Subir’s intervention in the Washington meeting.

Back in Mumbai, I related that conversation to Subir, thinking he would be flattered.

Subir deadpanned: “How does the FM know? He wasn’t even there when I spoke.”

That was Subir, down to earth and brutally frank.

I recall the first time I met him, a rainy July afternoon, in the RBI's Delhi office.

Rakesh Mohan, who was deputy governor, decided to move on some six months after I joined as governor, and I had to find a successor to fill Rakesh’s big shoes.

Many talented, well-known economists of the country met me to express an interest in the job.

Subir wasn’t one of them.

In a chance encounter, T N Ninan of Business Standard asked me if I had thought of Subir, a regular columnist for their paper, whom he regarded very highly.

I invited Subir to come and see me.

During that meeting, our conversation covered a variety of topics - global and Indian economics, central banking during the crisis, his family and mine, comparison of living in Delhi versus living in Mumbai.

Even half way through the interview, I knew I had my man - one of the few wise decisions I made as governor.

Subir was an outstanding macroeconomist who brought a keen sense of the market to bear on RBI policies.

I was impressed by his sharp intellect, his ability to connect the dots in understanding complex issues and the way he built a robust rationale for our policies.

The weekend before each policy meeting, we would gather to pore over the draft document, analysing the rationale, sharpening the nuancing and even arguing over English grammar. Inevitably, we would decide to recast some portions, both of us sharing the burden of rewriting.

Subir invariably finished his homework first, typically writing about 500 words within half an hour even as I would be agonising for half a day.

In meetings, he spoke selectively but when he did, he was heard with respect because of the insights he brought to bear on issues.

One of the things I noticed in my long career in the IAS ending with my stint in the RBI was that all of us have a bias for the glamorous stuff - focusing on things that will get us recognition and reward - and tend to neglect stuff that is important but unglamorous.

He was once calling a meeting of RBI chair professors from across the country and asked that I chair the meeting.

I begged off saying my plate was full, would he please handle the meeting; I would definitely make time for the next.

The glint of disapproval was clearly evident in his eyes.

In the event, I did go to the meeting and found the interaction with academics to be a rewarding learning opportunity.

This clearly was not a market-moving event.

No newspaper was going to waste column inches writing about the RBI top brass meeting academics but that didn’t deter Subir from doing what he thought was institutionally important.

That Subir was a foodie, a great cook, a fan of MasterChef Australia is well known.

When US Treasury Secretary Timothy Geithner and Federal Reserve Chairman Ben Bernanke visited RBI, the lunch we were hosting for them was scheduled for 11 am to accommodate their travel plans.

Subir offered to plan the menu for that oddly timed meal and ended up even writing the recipes.

Bernanke told me later that it was the best meal he had during what was his first trip to India.

When Urmila and I were visiting Washington a couple of years ago, he invited us to dinner at his place.

I was deeply touched that he personally cooked the meal for us - Maharashtrian vegetarian for me and Konkani seafood for Urmila.

We went our different ways in our post-RBI lives.

Although in touch sporadically, I knew he remained my well-wisher.

We last spoke in December last year. Almost the first thing he asked me was “Subba, why have you become so invisible? You don’t speak, write or engage on any ongoing policy developments?”

I told him I was wary of jumping into issues when not fully clued in on all the nuances.

Across the phone lines I could sense the glint of reproach in his eyes.

You are being too diffident, he told me.

When everyone is commenting on everything, it’s a shame that someone with your background and exposure doesn’t engage.

He even emailed me later to urge that I should not deliberately retreat into the background.

During the same conversation, he told me without any remorse or fear that he was diagnosed with cancer and also told me the course of treatment he would be following.

In subsequent months we exchanged mails and I was touched by how bravely he fought on even as the end seemed to be closing in.

Over the last few weeks, I knew he was going; even so when the bad news came, I was immensely saddened.

I will carry very fond memories of this wonderful human being who served the country and the economy with great dignity and distinction.