The Railway Minister is seeking to break the vicious cycle of low internal generation and low investment for the Railways, rues R Sivadasan 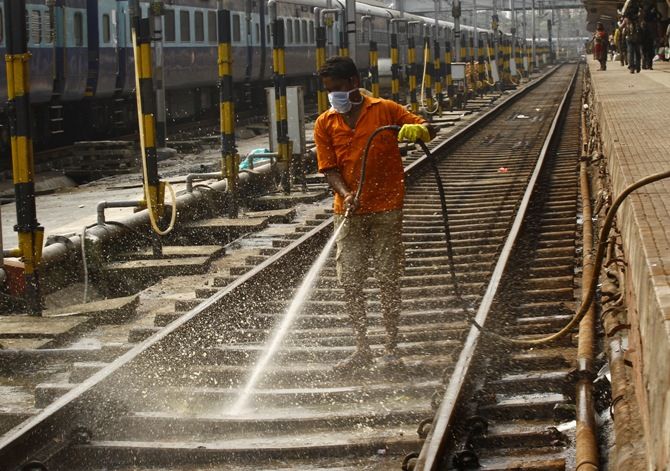 A packed Budget disappoints when it appears no different from the past. Indian Railways is not an ordinary enterprise.

Its performances on both financial and operational parameters are of international levels.

Yet we are facing a situation of empty coffers but eagerness to expand and modernise.

What do we do? Follow the conventional route of sticking to a large shelf of projects and make funding these projects an end in itself.

Investments may drive traffic on a long term but investments must follow traffic to reap benefits.

Completion of projects has to be a key priority. Take a lesson from the announced commissioning of 2,000 km of doubling projects.

These are what matter.

However, these too have been commissioned with a lag.

But do they guarantee an increase of Rs 6,000-7,000 crore (Rs 60-70 billion) that additional coal traffic from mines could have fetched?

Are these projects languishing for want of funds? Not so. It is implementation bottlenecks that need to be addressed.

These can only be overcome through zealous coordination with states and ministries.

Where is the revenue strategy to service debt and sustain the Railways?

Where is the strategy to build up revenues for the forthcoming Pay Commission?

The prime minister has already committed to a Diamond Quadrilateral of high-speed rail.

Feasability studies started with Mumbai-Ahmedabad route, way back in 2006-07.

We are still seeking funding in a piecemeal strategy to showcase such a project which actually has far greater potential of transformational impact on a country’s economy when rolled out strategically.

There are no sparkling jewels in the Budget.

The minister is seeking to break the vicious cycle of low internal generation and low investment for the Railways.

The intent is good and the strategy of investment on borrowed funds could even have been commended, if, and only if, the investment packages had been clearly identified and revenue streams for debt financing ring fenced to enhance investor confidence.

At least part of the debt burden should have been shared through annuity support from GBS, as has been contemplated for road ministry and suggested by erstwhile Planning Commission.

In fact another area of concern is the manner in which state Special Purpose Vehicles as Joint Ventures are proposed.

Joint Ventures with State SPVs originated as an idea from the erstwhile Planning Commission.

However, it has  not been absorbed correctly by the Railways.

The original idea was allowing states to take complete ownership of these ventures with railways as a technology partner.

Failing this, these JVs will end up as commitments and debt liability on the Indian Railways’ balance sheet.

Similar to what happened in the case of Konkan Railway which started as a JV with multiple state governments, but IR is now holding the debt restructuring liability.

The model is not being criticised. The caution is on mode of ensuring states take on their responsibilities.