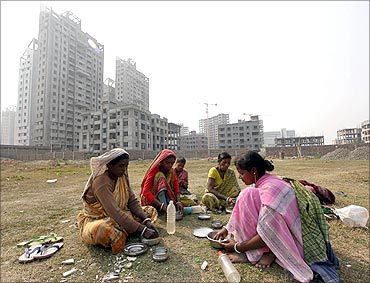 Kolkata need not feel inferior as it has its own “alive only at weekends” Lavasa, says Subir Roy.

The road to the poshest of posh developments on the outskirts of Kolkata is multi-lane, 21st century India, two-thirds of the way. New Town is new in many positive ways. Then, after a turn it suddenly changes. The Rajarhat road is narrow, potholed, congested with crawling traffic made up of private cars and buses that ply a single route.

The contrast in what lies by the road is equally glaring. Gleaming, elegantly designed high-rises with every kind of amenity remain ensconced in their world marked out by boundary walls and gates with security guards. Next to them is mofussil India with one, two- or three-storeyed houses built without an iota of planning. These are fronted by shops selling provisions for small-town India cheek by jowl with those that have everything you need to build and fit out those high-rises.

After the traffic has crawled for close to an hour (the earlier part of the journey from the city proper took less) you arrive at the development. Called a village, it is a self-contained habitat which has created a mock countryside complete with lagoon, villas on stilts and little lanes lined with hedges tended by a platoon of malis (gardeners).

The villas cost a fortune but how can you live there and get to work every day, given the condition of the connecting road? I find out that those whose nameplates hang from signages at crossings (“if you are looking for the Bansals they are down this lane”) come mostly during weekends to take in the still clear country air and recuperate. The only spots truly alive are the conference halls and guest rooms where corporates hold their management retreats. Kolkata need not feel inferior as it has its own “alive only at weekends” Lavasa.

What does this kind of development (“village” and high-rises) do to life in these peri-urban areas just beyond the boundary of established urban municipalities? Fertile, multi-crop land is declared low-lying wasteland, allowed to be converted to non-agricultural land by obliging local officials, filled up and raised to ensure even the worst flooding cannot get to them and then built upon through high-rises.

These obstructions play havoc with the natural drainage that till now had ensured the yearly cycle of monsoon flooding and subsequent drying, allowing the cultivation of a year-round calendar of crops with different levels of thirst. Now there are stagnant pools long after the rains, playing host to dengue-bearing mosquitoes and emitting the most awful stink, with rotting vegetation and garbage just below the surface.

Those in the high-rises have been praying that the main road will be repaired some day and their prayers have been answered. Hectic work is on just before the pujas (maybe Ma Durga has sent word that she cannot come unless the road improves a little), not just for resurfacing but laying of large-diameter storm water pipes. So have faith, deliverance is coming. Only traversing stretches of the road right now is pure hell.

What needs doing is fairly simple and known to most who think about creating acceptable urban capacity. The latest McKinsey study on India speaks of growing urbanisation as a key driver of its stellar growth. But for that urbanisation to ensure a minimum quality of life (or else what you earn extra will more than go away in treating ill health), it is imperative not just to plan new towns but the peri-urban areas around them.

This is because, even before you know it, towns spill over their municipal boundaries and people live in the new areas sans proper roads, drainage and water supply and go to town to work. Soon there are demands for including these new areas in the municipal corporation proper so that there is some budget to lay out minimum facilities. But by then these areas have all been built up haphazardly along narrow meandering roads that served quite well as country roads till not so long ago.

So then you have to dig up those narrow roads, down one of which I had the misfortune to pass recently, to lay out sewer and drinking water lines, not to speak of ducts for optic fibre cables to give you last mile connectivity. When New Town was being properly planned and built, it was imperative to make sure parts of Rajarhat did not get simultaneously built up the wrong way. Do you plan to rectify mistakes or ensure that mistakes don’t get made down the line?

The state government recently announced land ceiling exemption for “townships” covering at least 50 acres. This will delight medium-size builders dear to local politicians. But who will build the roads to these developments? Will these projects be sanctioned only after assessing whether the infrastructure in the area can take the additional load?

So much better to incentivise only townships worth the name (say, at least several hundred acres) which will interest builders with infrastructure expertise like a Shapoorji Pallonji or L&T. Ideally, these could be self-contained towns by highways or railway lines which don’t add to urban sprawls.

Image: A file photograph of a labourer's family outside the construction site of a highrise in Kolkata Photograph: Rupak De Chowdhury/Reuters. 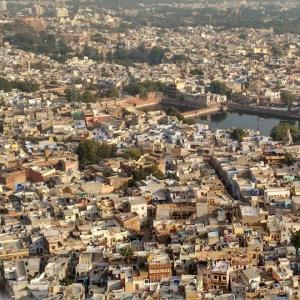