‘Already, tax revenue has been running well short of targets. Along with the undeclared part of the deficit (hidden in various public sector companies’ books, or piling up as the government’s unpaid bills), the deficit this year could well be the highest in a decade -- after 6.4 per cent was logged in the global crisis year of 2009-10,’ says T N Ninan. 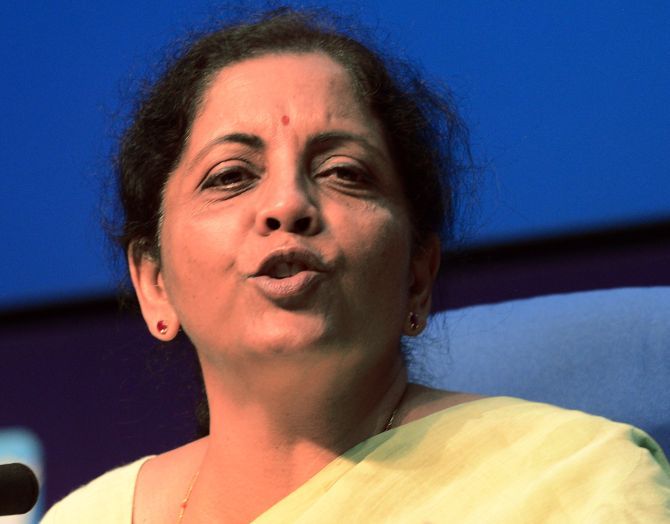 All previous announcements having failed to do the trick, Nirmala Sitharaman has thrown the kitchen sink at the problem of slack economic growth -- officially recorded for the last economic quarter at 5 per cent, and expected by many observers to be even lower in the current quarter.

In slashing the corporation tax rate to the long-promised 25 per cent, the finance minister has delivered what her predecessor promised five years ago, and which a draft direct tax code had proposed even earlier.

She has thus brought the corporation tax rate closer to the levels in other countries in the region.

The step recommends itself further in that it is better to put money in the hands of private players than for the government to be increasing its own spending.

The clever part of the announcement is a concessional 15 per cent tax rate for fresh investment.

This mirrors what Thailand announced last week: a 50 per cent cut (to 10 per cent) in corporation tax for factories that re-locate from China. Vietnam too offers a 10 per cent rate for targeted firms.

Clearly, the concessional rate is designed to see if India can gain from the US-China trade war and at the same time give a boost to the stalled ‘Make in India’ programme.

Will it work? The jury must be out, because the consensus has been that what ails the economy is lack of demand.

Boosting post-tax corporate profits attacks this issue only tangentially. For demand to get a boost, companies need to distribute larger dividend payouts, and invest in new capacity that they would not have done otherwise (this would increase the demand for capital goods, which have seen a decline in production).

The problem of weak rural demand is not addressed, nor does the new announcement help companies that have slipped into the red because of slack demand or declining exports.

The tax cut is not the only thing announced. There is also a return to the bad old habit of ‘loan melas’, and a fresh diktat to government-owned banks. This time, it is a command that no loans to small and medium enterprises should be declared non-performing, till the end of the financial year. When will things change?

The “kitchen sink” is of course fiscal restraint, which has been kissed goodbye.

Already, tax revenue has been running well short of targets. Along with the undeclared part of the deficit (hidden in various public sector companies’ books, or piling up as the government’s unpaid bills), the deficit this year could well be the highest in a decade -- after 6.4 per cent was logged in the global crisis year of 2009-10.

Bear in mind that, just a day before the finance minister’s press conference, the governor of the Reserve Bank had declared that there was “little space” for a fiscal stimulus -- a view echoed strongly by one of his predecessors.

In announcing just such a stimulus, which translates into a larger government borrowing programme, the finance minister has changed the dynamics of the debt market and made problematic a widely-expected interest rate cut by RBI next month.

Alternatively, any policy rate cut announced will not find full reflection in a constrained money market. So while the equity market celebrates, the debt market has been left with a problem. In economics, there is no free lunch.

The tax cut has been done in a manner that hurts states disproportionately, because the cut is in the rate of basic tax (revenue from which is shared with states), not in the surcharge that the Centre keeps for itself.

The states now have one more complaint against a central government that had once promised cooperative federalism, because New Delhi has recently re-framed the terms of the Finance Commission to pre-empt a part of Central revenue before it is shared with states.

Further, adopting an aggressive stance, it has proposed to the Commission that the states’ share of central taxes should be slashed sharply from present levels.

No government in New Delhi has ever done this, and Centre-state fiscal relations are therefore fraught. But why worry when companies and investors are happy?