Mr PM, the Bangladeshi taka is doing better than the rupee!

Based on the GDP numbers and the remarkable stability of the taka, Bangladesh's prime minister, Sheikh Hasina, is a better manager than our ‘economist prime minister’,’ says TVR Shenoy. 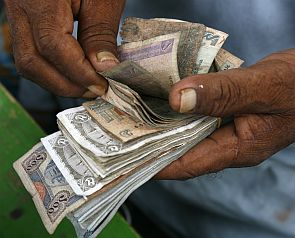 Blame the Opposition! Blame the Supreme Court! Blame the US. Federal Reserve! Blame Syria! Dr Manmohan Singh will blame anything and everything but himself and his regime, both for the corruption over which it has presided and its sheer ineptitude.

Much has been said of the nauseating corruption of the Manmohan Singh years; much more needs to be said. But why do his praise-singers in the media still laud the prime minister and his economic team as ‘brilliant’ despite all the evidence to the contrary?

Let us take that latest 'achievement' of the UPA, the Rahul Gandhi-inspired Land Acquisition Bill. A key provision is that no land will be acquired for a private project unless 80 per cent of the people owing the land agree to sell (or 70 per cent for public-private partnerships.) To understand Indian industry's dismay at this look at the 2009 election returns.

How about the tumbling rupee?

The prime minister blames the US Federal Reserve. Its policies, he says, brought down not just the Indian rupee but also the Indonesian, South African, and Brazilian currencies. Dr Manmohan Singh should have looked closer home, at Bangladesh.

It is marginal but the taka has actually risen against the dollar.

Did I mention that Bangladesh's GDP is set to grow by an estimated 6.1 per cent while that of India will be between 4 per cent and 4.5 per cent? Based on the GDP numbers and the remarkable stability of the taka, Bangladesh's Prime Minister, Sheikh Hasina, is a better manager than our "economist Prime Minister".

Bear in mind that Bangladesh's GDP growth is based upon the solid ground of manufacturing -- particularly textiles -- rather than playing with inflows of cheap money.

At this point it is necessary to rewind half a decade. Ben Bernanke, chairman of the US Federal Reserve, is a student of the Great Depression, and knows the havoc caused by the freezing of credit.

Determined not to repeat that error, Bernanke started pumping enormous amounts of money into the economy, up to $85 billion a month.

Let us put this in perspective. As of August 23, 2013 -- the latest figures released by the Reserve Bank -- India's foreign currency reserves were $277.72 billion. The US Federal Reserve, while keeping interest rates at historically low levels, pumped out more dollars in just four months.

Some of that flood of money washed up on Indian shores as investors gambled in the Indian market and Indian business houses borrowed from abroad. That, many suspect, is what kept the Indian GDP numbers respectable.

On June 19, 2013 Ben Bernanke said that the US economy had revived to the point where the Federal Reserve would "taper" its money-pumping, from $85 billion a month to 'just' $65 billion a month. That was enough to spook India.

Why didn't it also spook Bangladesh?

The answer is that the foreign funds flowing into our neighbour had gone into productive investment like putting up factories, not into playing the stock market. Once you put up a plant it means that you are planning to be around for years, probably decades; money put into the stock exchange can be withdrawn, literally, the same day.

Factories, it goes without saying, also create jobs. They may be dirty jobs but they help to put food in the belly -- and American dollars into the reserves. India's current account deficit is estimated at approximately 4.8 per cent of our GDP; that of Bangladesh, according to World Bank data, will be less than one per cent, an estimated 0.78 per cent of its GDP.

The low interest rates offered in the United States (and other developed economies) also encouraged Indian business to borrow from abroad. But now they have to repay the loans -- and the falling rupee has thrown off their calculations.

It is whispered that roughly one quarter of the Indian borrowers simply do not have enough cash in hand to repay the loans they took in the boom years.

Why didn't foreign money find its way into building factories in India too as it did in our neighbour? The simple answer is that the Manmohan Singh government went out of its way to alienate business.

The Vodafone dispute is a stunning example of this government's silliness. There was a tax dispute between the telecommunications firm and the Government of India. The case went up all the way to the Supreme Court, which ruled in Vodafone's favour in January 2012.

The Manmohan Singh ministry responded with retrospective legislation. In effect, it pretended that it had access to a time machine, enabling it go into the past and change the laws, thereby forcing Vodafone to pay taxes that the Supreme Court had said it did not need to pay.

Is this going to give confidence to any investor?

But Vodafone is just one of many cases where the UPA ministry is quarrelling with multinationals. The list includes the petroleum giant Royal Dutch Shell, the clothing manufacturer Gap, the software firm Microsoft, and General Electric.

By now even Indian business houses believe it is better to invest outside India. The information technology sector is one of the few still propping up the Indian economy, and Tata Consultancy Services is one of the crown jewels.

How many Indians realise that TCS now has an operation in Shanghai, which worked so well that TCS opened a global development centre in Hangzhou too?

Every major Indian business house is looking elsewhere in Asia, or even in Africa. If they have not already invested outside India they have drawn up the blueprints to do just that. And that is not just because other nations are more welcoming to corporate houses, it is also because there is a huge hidden cost to doing business in India — corruption.

Indian banks charge enormous interest. Indian land is just not accessible. Indian labour is not trained, and Indian labour laws cannot be reformed. Add corruption — at least 15 per cent of the cost, very probably more — and you can't blame Indian business for refusing to invest in India.

There may be even more bad news. Persistent inflation means that we will need to spend more on essentials — food, electricity, petrol, — leaving us with less to spend on other things. That translates into smaller profits — possibly no profits — for businesses. They will respond by investing even less, translating into zero job creation. This is not a vicious cycle but a downward spiral.

Ten years ago, at the end of the Vajpayee era, India dreamt of competing with the United States and China. Now, at the fag end of the Manmohan Singh years, we are being shamed by Bangladesh on every economic parameter — currency stability, GDP growth, and the current account deficit as a proportion of the GDP.

It makes news when this prime minister opens his mouth. It is bigger news when the prime minister gets angry. But Dr Manmohan Singh's anger will be nothing compared to the fury of the aam aadmi when the bill comes due for his government's corruption and mismanagement.

Image: A file photo of a money vendor in Dhaka. Photo: Andrew Biraj/Reuters 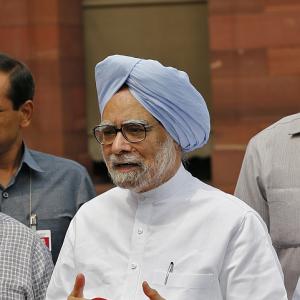 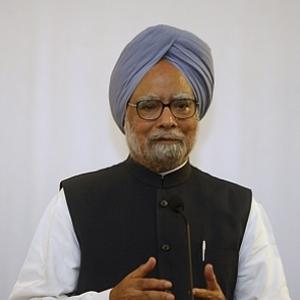