While his predecessors, Manmohan Singh and Atal Bihari Vajpayee, had trusted confidants as their chief advisors, the economic advisors to the Modi government are, instead, more transactional in their role, their importance based on the programme or policy on hand that is sought to be steered, says Subhomoy Bhattacharjee. 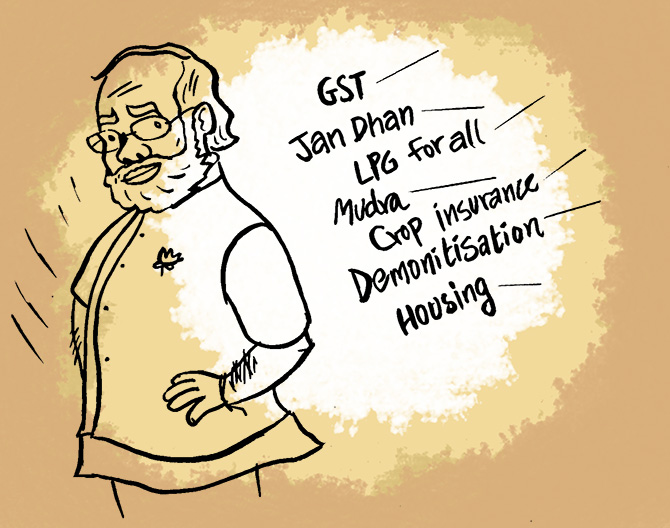 As the economy’s numbers point to a large-scale slowdown, it is important to focus on the men and women advising the government, specifically Prime Minister Narendra Modi.

Both his predecessors, Manmohan Singh and Atal Bihari Vajpayee, had trusted confidants as their chief advisors: former Reserve Bank of India Governor C Rangarajan for Singh and Vijay Kelkar for Vajpayee.

The former became chairman of the Prime Ministers’ Economic Advisory Council (PMEAC), after Suresh Tendulkar quit in 2009. Kelkar often described himself as paramarshdata (advisor) in the finance ministry in North Block but his views were often solicited by Vajpayee from across the road in South Block.

Among those who advise Prime Minister Narendra Modi on economic policies, there is no such clear hierarchy. So there is no concept of a confidant in economic spheres unlike, say, the role National Security Advisor Ajit Doval plays in steering the security of Jammu and Kashmir.

The economic advisors to the Modi government are, instead, more transactional in their role, their importance based on the programme or policy on hand that is sought to be steered.

For instance, Parameswaran Iyer, the bureaucrat in charge of Jal Shakti Abhiyan, the water conservation mission, was also the author of the government’s massive project to tackle India’s water crisis through a set of interventions.

The closest someone could come to Rangarajan or Kelkar’s position in this government is former RBI governor, Bimal Jalan. But he, too, has been discreet, offering counsel only on specifics.

Other than the report on the RBI’s capital reserves, which was put up to its board last Monday, he has authored a report on expenditure management, which the government never made public but has acted on in many cases.

It is no secret that the prime minister prefers not to surround himself with economic advisors. His signature economic policies rarely carry the overt imprint of any particular advisor or group -- unlike, say, that of the National Advisory Council in the rural employment guarantee programme in Manmohan Singh’s government.

This predilection has had a discernible impact on the government’s handling and defending of macroeconomic issues.

Examination of macro-economic themes has been at a premium in Modi 1.0 and 2.0.

When someone has chosen to do so, the markets were caught unawares.

Recently, for instance, the Deputy Chairman of Niti Aayog, Rajiv Kumar, talked of an “unprecedented situation for the government [in the] last 70 years… [we] have not faced this sort of liquidity situation where the entire financial sector is in churn and nobody is trusting anybody else”.

Kumar’s remarks caused the markets to slide because they were unsure if this was the final commentary on the current economic situation or there was more to come.

The reason for the surprise is that between Rajiv Kumar’s Niti Aayog and the PMEAC with its five members, it is unclear who has the last word on any macro-economic issues.

Part-time Council member Rathin Roy recently raised a debate about whether the Indian economy has reached its limits in terms of expanding consumption, posing it as a structural slowdown since much of the demand for goods and services is confined to a thin upper crust.

Another member, Ashima Goyal, has argued that the present slowdown of the economy is largely due to cyclical factors (though she concedes some structural hurdles remain).

PMEAC chairman Bibek Debroy has not waded into the debate significantly except to point out that India is yet to become a middle income economy with its attendant problems.

It is not known, if this random public airing of concerns have something to do with the Prime Minister’s Office (PMO) not tuning in to the debate on macro-themes, except on occasions such as the run-up to the Budget, when a group of economists met Modi for one whole day.

In any case, Kumar’s statement, which he claims was misinterpreted, has renewed thinking within the top levels of PM’s team about the futility of listening to macro-economic suggestions and instead entrusting the work of advice on sectoral issues to those who will be responsible for running specific projects.

So the task of defending programmes such as the GST package, the Insolvency and Bankruptcy Code, the Jan Dhan project, Mudra, Direct Benefit Transfer, housing, electricity and LPG for all, and crop insurance and the pension schemes for the informal sector have all been entrusted to bureaucrats responsible for implementing them.

For example, the task of defending demonetisation in Modi’s first term was the remit of Shaktikanta Das in his capacity of secretary, economic affairs, instead of the chief economic advisor Arvind Subramanian. Again, GST was implemented and defended by then revenue secretary Hasmukh Adhia.

Niti Aayog, under its CEO Amitabh Kant, has rarely commented on these programmes ab initio, examining them only after launch. For example, Ratan Watal, the other member of the PMEAC, chaired the committee to review the framework for digital payments, rationalisation of autonomous bodies of the central government and the transformation of India’s gold market, none of them macroeconomic themes.

As a departmental secretary pointed out, this government is keen to listen to the debates that are “finite and quantifiable”. From the debate on employment, the Modi government picked up the need to quickly reorganise employment statistics and has begun issuing those from the provident fund scheme every month.

The government is happy to listen to the bimonthly commentaries from the RBI when it resets interest rates, usually in lockstep with the government’s thinking. It would similarly adhere to the award of the 15th Finance Commission headed by N K Singh and take on board its comments.

But it sits ill with the advice of chief economic advisor in the finance ministry, Krishnamurthy Subramanian, who highlighted the discrepancy in tax estimates in his first Economic Survey.

As Finance Minister Nirmala Sitharaman said in Parliament, the Survey enjoys an arm’s length separation from the government’s examination of policies of specific ministries. It is unlikely that the PMO will listen in except when there is a specific solution on offer.