The employment that is returning is mostly essential services required by Indian households.
Most urban Indian households can't function without a retinue of maids, cooks, drivers, cleaners, notes Mahesh Vyas. 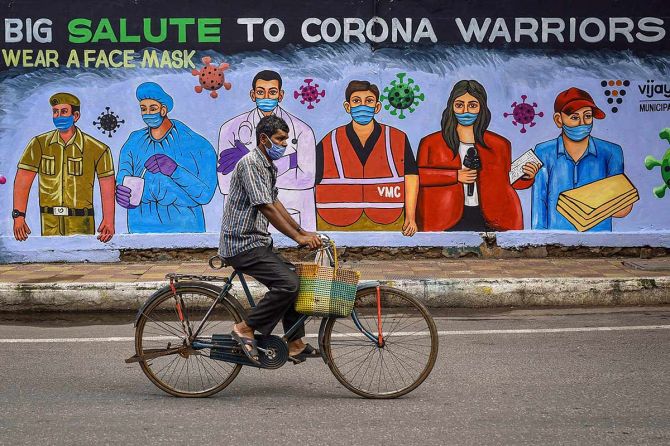 IMAGE: A cyclist rides past a mural paying salute to the frontline corona warriors, during Unlock 3.0, in Vijayawada, August 4, 2020. Photograph: PTI Photo

Preliminary labour statistics for the first three weeks of July indicate a further improvement in labour conditions in the month over last month's dramatic turnaround. The labour participation rate has inched up and the unemployment rate has declined so far during the month.

The gain hasn't been as smooth and as confident as it was in June. We have worried about the June recovery facing fatigue towards the end of the month and in early July. But the net results seem to be headed towards consolidating and making further gains in July albeit lesser than in June.

Labour participation picked up smartly in the week ended July 19. At 41.7 per cent it was heads and shoulders above the 40.4 per cent recorded during the preceding two weeks.

Much of the ground lost during the last three weeks has been recovered. The LPR (labour participation rate), it may be recalled, had touched 42 per cent in the third week of June and then slipped for three consecutive weeks.

Not all of the increase in labour participation could be provided employment.

Finally, it is the employment rate that matters.

If an increase in the labour participation rate does not lead to any increase in employment, it only raises the unemployment rate.

Therefore, a mere increase in the labour participation rate is not a sufficient indicator of progress.

Similarly, a low unemployment rate is useless at a low labour participation rate.

This is India's predicament.

What matters in the final count is the proportion of the working-age population that is employed. This is measured by the employment rate.

A serious challenge that India faces is that the employment rate has been on a gradually declining gradient. It has fallen from around 43 per cent in 2016 to less than 40 per cent in 2019.

The good news is that the employment rate has continued its recovery in July as well. The average employment rate during the first three weeks of the month was 37.5 per cent. This is still a long way from the 39.2 per cent average in the first quarter of 2020.

The 170 basis point difference between the two implies that employment is still around 18 million short of what it was a few months ago.

Nevertheless, an important takeaway from the weekly labour market estimates is that the small decline in the employment rate in the weeks ended June 28 and July 5 has been reversed.

The big surprise in the recovery of the employment rate in July is in urban India.

It fell in the first week of July to 33.2 per cent and remained thereabouts for another week before recovering back smartly to 35.1 per cent.

The recovery in the urban employment rate is surprising because news reports suggest that towns that were 'unlocked' recently have been brought under a lockdown again. This is true of Bengaluru, Pune, Patna and Lucknow among others.

In spite of these intermittent lockdowns and their relaxations, the nature of the lockdown in recent times has changed. Many types of services have resumed with restrictions. For example, house help and other services have restarted in most towns.

Several construction sites, factories and offices have started operations with thinner attendance. Urban lockdown seems to be evolving in every town to find its own local equilibrium between loss of lives and loss of income. The net result is that slowly employment is returning.

The employment that is returning is mostly essential services required by Indian households. Most urban Indian households cannot function without a retinue of maids, cooks, drivers, cleaners.

These and many of their kind have returned to work. As a result, in some ways, the lockdown has become more bearable for middle class urban households. The disturbing plight of the hapless migrants does not plague the urban vision anymore.

The Nifty 50 yielded 7.5 per cent returns in June and it continues to scale higher in July.

Quietly, a new equilibrium seems to be setting in.