'It is at the root of all the reservation tussles, and the sharpening polarisation that we witness today, be it on Jat politics or the problems faced by Indians from the north-east in many places,' says Ambassador Kishan S Rana. 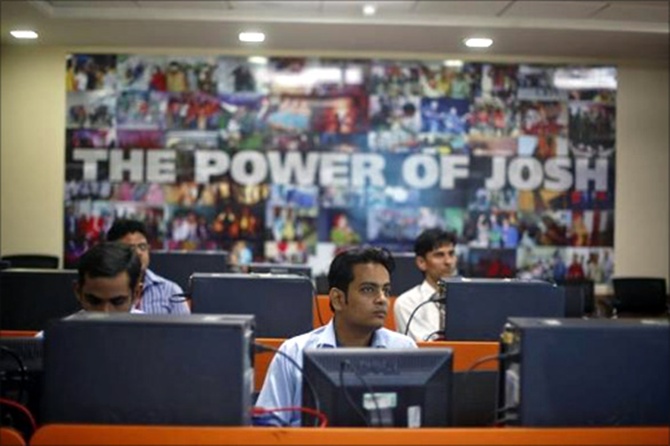 Many among us, or dare I say most, have ideas on what ails the Indian polity, and what ought to be done. We can sit around wringing our hands and narrating to one another the latest story heard on past misdeeds and current misgovernance.

In the housing complex where I live, we have an evening adda. Amidst the retelling of bad, ancient jokes and juicy rumours, we sometimes also speak of real issues. Profiting from such interchange, let me offer a personal list, after winnowing out the whimsical and the unattainable.

Is the idea of cooperative governance, in which governing coalitions and opposing parties actually join in tackling real issues, truly beyond our ken?

This sounds like a pipe dream in our fractured times of intense polarisation over every issue, some even inconceivable. But why not think of a few possibilities?

First, it must have been in 1996 that a lunch conversation with an editor led to an article I wrote on the German constitutional method. In that country -- which bears an uncanny resemblance to India on several basics -- after every election, federal or state, the first task of the new government is to win a vote of confidence from its legislative body.

Thereafter, they can be overthrown only if another rival political formation wins its own vote of confidence in that same body.

What this 'positive confidence vote' ensures, in replacing a UK-style 'vote of no confidence', is to add to stability, removing aya-ram-gaya-ram horse-trading to pull down governments, without replacing them with more credible ones.

Is this possible in India? Perhaps. To ensure that a ruling regime does not gain undue advantage, any Constitutional change in India might mandate also that the new formula will only go into force after the next national election. Can we consider this further?

Second, the German Upper House (the Bundesrat) is composed of the ministers-president of the 19 Landers (states); one to three ministers accompany each of them at this Upper House, as per the size of the state. That makes it truly a 'house of states.'

Such a formula held little attraction for our founding fathers, concerned as they were with preserving the unity of India, which could not be taken for granted in those early Independence years. And today, such profound change is impossible. But one can wistfully think of what such a transformation in Centre-state relations might have meant for India.

Just think: Germany has no state governors, nor any Article 356. Then, what holds the country together in the face vicissitudes of domestic politics? Simply the system itself.

The country's self-governing process is well understood by all; it works effectively, with a constitutional court as an arbitrator.

What we ought to welcome is that Narendra Modi empathises with the state perspective. His 'cooperative and competitive federalism' is indeed the leit motif of our times. We need to shift more powers to the states.

Third, indirectly connected with the above is a notion of a 'national coalition' government, in which major political parties join hands. Is this unthinkable in India? Perhaps. Only a national existential crisis might create conditions for such massive rethinking on governance.

But if we posit ourselves in the context of the huge challenge that India currently faces, and the unprecedented cusp of opportunity that confronts us now, captured well in T N Ninan's Turn of the Tortoise and other recent books, might this be re-thought?

A year, or even two years before national elections, this would be unrealistic, but right now, close to the end of the second year of the Modi government, such momentous change is worth contemplation.

If politics is the art of the possible, should we not at least examine the advantages of such a national coalition government? For one thing, it would place on notice the fractious, fragmentary groups whose noise output exceeds their real and potential contribution to national affairs. Is that a thought worthy of study?

Finally, job creation is the greatest of India's challenges today. It is at the root of all the reservation tussles, and the sharpening polarisation that we witness today, be it on Jat politics or the problems faced by Indians from the north-east in many places. That connects with our flawed school education system, and the unemployability of up to 80 per cent of engineering graduates, to give just one example.

It is also the greatest rationale for a national government, even though most of us notice only the visible one-tenth of this looming iceberg. This is an existential problem that will turn our vaunted 'demographic dividend' to naught, when burgeoning ranks of the youth, whose numbers will continue to expand all the way till 2030, when the demographic transition will kick into its next phase, then beginning to reduce these numbers.

This has happened in China since 2012; the key determinant is a fall in the national total fertility rate to below the ‘replacement level of 2.1 per woman, and the consequent rise in the 'dependency ratio' -- the numbers of working people as against the dependents.

True, the Indian growth numbers today are better than for several years in the past. One example: FDI inflow in 2015 reached an unprecedented $67 billion. But the development challenge remains daunting.

Did you say none of this is feasible? OK, then back to the adda.

The other day a high official announced that by 2032 India would be a $10 trillion economy, against today's $2 trillion. Most of us are fed up of nostrums from politicians and sundry bureaucrats on what India can become, at some dim future date.

Why not speak of what has actually been done, and what actually is in the delivery process?

When people of this ilk speak of distant goals, they know that no one will remember their lofty promises, and they will not be around to be held to account.

Does anyone tell these soothsayers that such smoke-and-mirrors are just that?

Ambassador Kishan S Rana IFS 1965 has served as India's ambassador to Germany, He is currently an Honorary Fellow, Institute of Chinese Studies, Delhi.