It is time the government cast its net wide for seeking expert advice on managing the Indian economy and formed a group to help it navigate the difficult days ahead, advises A K Bhattacharya. 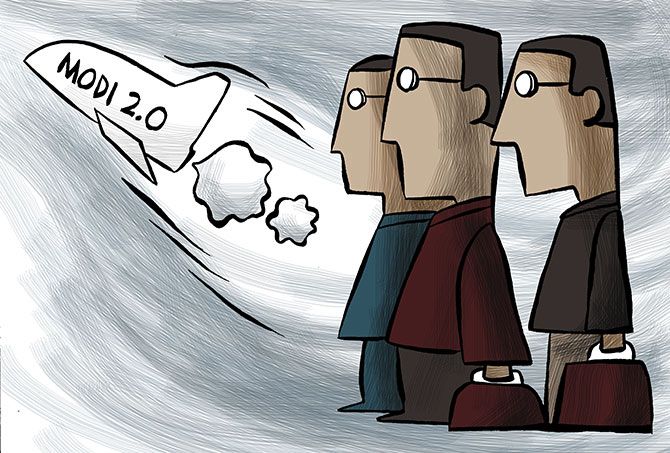 India is facing many crises at present.

The COVID-19 pandemic has given rise to a health crisis. Steps taken to control the spread of the virus have in turn aggravated the existing slowdown in the economy and caused an economic crisis.

And making the management of these crises a bigger challenge are the recent India-China skirmishes on the Line of Actual Control that divides the two neighbouring countries.

The Narendra Damodardas Modi government has been fully preoccupied with tackling all these challenges. Over the last many weeks, it has responded to the crises with many policies, packages and diplomatic as well as military initiatives.

It is perhaps too early to comment on how well these measures have worked in achieving the desired goals. But a trend in the manner in which the government has responded to the health and economic challenges, in particular, is worth noting.

In any governance structure, particularly in a democracy, the elected political leadership has to be in the forefront of all decision-making processes. This has been true of India and that is how it should have been.

As expected, the political leadership has received inputs and advice from India's civil servants, including officers of the Indian Administrative Service, who, therefore, have been playing a key role in helping the government frame its initiatives to tackle these crises.

However, missing in the current governance structure are professional experts.

The question that arises now is whether the government initiatives would have been better informed or better packaged if there were adequate inputs and advice from professionals with domain expertise, working within the government or outside.

Look at the management of the COVID-19 outbreak. Should the national management, control and mitigation of the virus have been steered by doctors, health experts and epidemiologists?

But there are two clear flaws in the current system.

One, the power to take decisions in managing the virus rests solely with a group of civil servants and the political leadership.

There is nothing wrong in the political leadership taking the final call. The problem is because there is very little input that the leadership gets from experts in the field.

Two, there is a growing public perception that bureaucrats, who were till the other day handling tourism or education, are now overseeing the policies on managing the pandemic.

The generalists have become specialists, sorely needed in handling a crisis.

Both the flaws can prove to be a serious handicap for the government.

It is important that known experts in the field of managing such epidemics should be directly involved in the government's policies in this area and they should be the public face as far as these policies are concerned.

The effectiveness of professional advice can never be ignored.

More importantly, the confidence and trust of people in healthcare policies of the government in a pandemic are always more when these are seen to be framed by professionals with domain expertise, and not generalist civil servants.

Even in India, the successes that the government achieved in containing the spread of the virus in Dharavi, a cluster of slums in Mumbai, can be directly attributed to the involvement of experts and the implementation of the strategies advocated by them.

Bengaluru also witnessed early successes because they had sought the help of health experts, including doctors, to steer their policies of containing the spread of COVID-19 and their implementation.

In the sphere of economic policy-making also, the role of experts cannot be ignored. But there aren't too many economic experts in the government, who have a decisive say in framing policies.

Not that the Modi government does not have qualified economists on its staff or as its advisors. Bibek Debroy is the chairman of the prime minister's economic advisory council. Assisting him are two economists as the council's part-time members -- Sajjid Z Chinoy and Ashima Goyal.

The finance ministry also has its chief economic adviser in Krishnamurthy Subramanian. A few months ago, the government had even set up a committee of experts, headed by former chief statistician, Pronab Sen, to examine how economic data collection and compilation exercises can become more robust.

But the problem is you hardly get to hear about their involvement in economic policy-making. It is possible that these experts are offering their advice to the finance minister or the prime minister through notes and consultation papers that are not made public.

The Council was reported to have prepared a few status papers on major economic policy issues a few years ago. In recent months, its members have authored strategy papers on trade and growth.

But it is not clear if these members are playing a role in helping the government tackle the economic crisis.

Even the chief economic adviser is better known for his low-profile existence in North Block, the headquarters of the finance ministry.

It is not yet clear if the committee, headed by Pronab Sen, has completed its task and what the government's action would be on the recommendations it makes.

Recommendations of quite a few expert committees in the past have been gathering dust in government cupboards.

By various estimates so far, the Indian economy is staring at a contraction of about 5 per cent in 2020-2021. The last time India's economic output shrank by that margin was in 1979-1980.

If the government has to deal with the economic crisis of the current year, it must enlist views of economists and economic administrators, who had to deal with that crisis of a growth contraction of 5.2 per cent 40 years ago.

It is time the government cast its net wide for seeking expert advice on managing the Indian economy and formed a group to help it navigate the difficult days ahead.

Experts and their expertise should not be ignored, particularly in a crisis year.