A homoeopathic state of mind pervades our thinking in governance and infrastructure-building.
Do it in small, harmless doses, but nothing bitter, sharp, or bloody, says Shekhar Gupta. 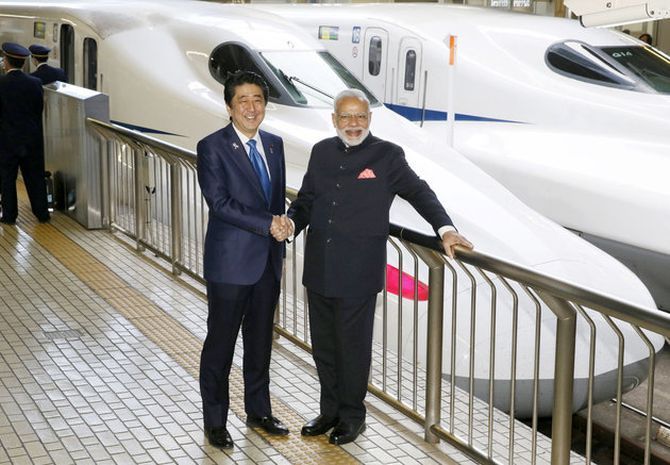 Homoeopathy, a relatively modern therapy, was invented in Germany by Samuel Hahnemann in 1796. It's been hailed, questioned, researched, rejected and mocked as a pseudoscience in developed countries since.

Only in India is it still a mainstream therapy. Every city, big or small, has its homoeopaths and usually a most trusted one called 'Dr Banerji'.

The fad is nearly dead in its homeland, Germany. In India, it thrives and also gets sizeable central government funding.

The 'H' in the ministry of AYUSH (Ayurveda, Yoga and Naturopathy, Unani, Siddha and Homoeopathy) stands for homoeopathy. It is dangerous in our country to make fun of it. I bet some abuse and outrage are on my way already for coming this far.

There has to be a reason why Indians so adore homoeopathy. Is it because it was designed for the pucca hypochondriac?

At the first whiff of a health doubt, you start chewing those sugary, spirit-flavoured pills, often for months.

You feel no effect of the drug, but in the course of time, you might believe you are better, even cured, apparently with no side effects.

Any stronger medicine or surgery we dread.

Are we then a country with a homoeopathic state of mind?

This is what seems to pervade our thinking in other areas too, especially governance, and more specifically infrastructure-building.

Do it in small, harmless doses, but nothing bitter, sharp, or bloody.

You have to mention a project of any size and a million jump at your throat, predicting apocalypse.

Most emphatic was from the Congress party's erudite lawyer Abhishek Manu Singhvi. Shah Jahan's Taj Mahal, he said, left India in economic ruin, famines, and starvation. The bullet train will run, he added, but the rest you can imagine.

Immediately, in fact, I would now worry for New Delhi's Shah Jahan Road.

More such came from elsewhere: Can India afford this, is it sustainable, will it make economic sense and, the criticism made with the greatest passion, that a country could not afford such a toy when it had 17,000 unmanned crossings and trains were derailing.

Never mind that the same people would then complain that the top average speed of our trains hadn't changed much since 1971, which is a fact.

Most interesting is the economic argument -- it is that with air tickets being so cheap, who'd pay for the bullet train? This discounts the fact that the only reason air fares have fallen is that privatisation increased capacity and supply.

Changing aviation from an embarrassingly incompetent and expensive State monopoly to free markets has been a bold and successful reform. It has led to a spectacular democratisation of air travel.

By the way, the Parliamentary Standing Committee on Transport had again, in 2013, opposed plans to privatise six other major airports. Speaking on its behalf, now Communist Party of India-Marxist general secretary Sitaram Yechury had said, 'We're totally against privatisation and transfer of assets to private entities.'

The criticism of bullet trains by the same lot now conveniently presumes airfares will never rise and bullet train fares won't fall, with economies of scale. Nor would they lead to a boom in land values and urbanisation, or, that the real, virtuous switch may be from carbon-spewing cars on the highways.

Stay within your means. Even the softest 50-year debt could ruin our future. It means nothing to the millions of our poor commuters and is therefore a moral hazard.

This farce plays out whenever a project of scale is planned. The outrage when E Sreedharan began building the Konkan Railway and Nitin Gadkari, as a young transport minister in Maharashtra (1995 to 1999, when he was in his thirties), planned the Mumbai-Pune expressway was similar.

It will devastate the environment and government finances. Now you can't imagine a world without it. And one of India's first, albeit short, BOT (Build, Operate, Transfer) expressways is the inspiration for a mass highway-building campaign nationwide.

Toll fully pays for the project. Yet, the real benefit has come elsewhere.

The expressway has made Pune a metro-sized sibling for a saturated and tired Mumbai, and a magnet for IT/innovation/new economy. It has generated tens of billions of dollars of wealth.

The Konkan Railway is the pride of India and the lifeline of Marxist Kerala.

In the past, it was the Planning Commission that ensured any notion of scale and ambition was squashed before it could get off the file stage.

There's a real (not apocryphal) story of Yojana Bhavan dissing the Maruti project as a pipedream as its 'projections' showed Indians would buy not more than 50,000 cars a year.

Hindustan Motors and Premier were already providing these, so why Maruti? It was wisely overruled.

Examine the debate over the privatisation of big metro airports. Besides the usual Leftist mass-mourning over privatising State 'assets' and thereby disembowelling their unions, there was talk of feasibility, over-capacity, and scarce resources.

Today, Mumbai, Delhi, and Bengaluru are already overcrowded and furiously expanding. Our aviation boom -- and rock-bottom air fares -- would not have happened without these.

Even Aerocity, the new hospitality district near Delhi airport, dismissed as a white elephant, is buzzing.

The utterly idiotic Comptroller and Auditor General report on Delhi airport privatisation, which made a buzz, has faded away. Many similar arguments were used when Delhi Metro was planned.

Today, 11 cities are building metros and Delhi is completing its fourth phase. Footnote: Transport expert and Indian Institute of Technology professor Dinesh Mohan had said in 2002: 'I don't think the Metro will be able to survive till 2021 when all 5 phases are completed.'

There are also instances where the minimalists or the homoeopaths won.

Mumbai's sea-link was abandoned when it was one-third built, just from Bandra to Worli, dumping Versova-Bandra and then Worli-Chowpatty, which would have become its north-south jugular. New options have been caught in analysis-paralysis.

In Delhi, the elevated east-west Barapulla corridor (caught in the Commonwealth Games maelstrom) stopped halfway as the government lost the nerve to finish it. It is being taken westwards again now, seven years later, to realise its potential.

This brings us to that living showpiece of Indian mis-governance, the capital's Rao Tula Ram strip, which was built as a two-lane bottleneck connecting the ends of an eight-lane highway to Delhi airport.

One excuse was to save money as 'traffic projections' didn't justify it.

An unspoken reason also was that one privileged and powerful caste group, fronted by former President R Venkataraman, also got a promise from the government, on the fear of the Lord, not to disturb the rock on which its popular Swami Malai Mandir was built. Within a few years now, it's being rebuilt and expanded.

The Delhi-Jaipur and Delhi-Amritsar sections of national highways are being six-laned when four-laning had barely ended.

The eight-lane Delhi-Gurgaon expressway was choked even before it was completed and government 'planners' had rejected the idea that it be made 12 lane instead.

The result is all our infrastructure is constantly under construction -- planned on a lower scale for creating shortages, and then expanded at additional cost.

Planning by homoeopathy, therefore, isn't harmless. It only makes the disease worse.

The best thing about the bullet train is that the Japanese will control the project and the money.

And whatever your quibbles with the Modi government, even its obsession with the gigantism of statues, you can't say that it has the chronic Indian fear of scale and speed.

It's another matter that it has enhanced its sarkari commitment to homoeopathy.