How a micro-loan revolution can counter growth slowdown

'Bank loans for amounts ranging from Rs 10,000 to Rs 50,000 have helped in demonstrably altering the lives of lakhs of women across the country.

'A large theoretical and empirical literature in development microeconomics suggests that when credit is routed through women, the household as a whole experiences better outcomes in the form of increased consumption or investment on goods,' say Soumya Kanti Ghosh and S Adikesavan. 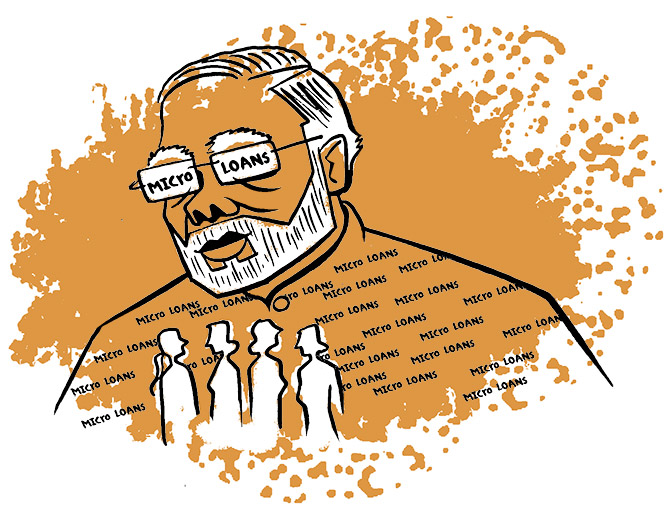 In the midst of all the noise regarding the current growth slowdown, we have somehow forgotten some of the potentially transformative announcements made in the first Budget of Modi 2.0.

One such announcement was the offer of micro loans at an effective rate of 4 per cent per annum for women in self-help groups (SHG) towards income-generating activities in all 727 districts of the country.

At present, under the Deen Dayal Antyodaya Yojana (DAY) scheme, these ultra-low interest loans are available only in 250 districts.

Woven around the brilliantly practical theme of antyodaya (resurgence of the lowliest) articulated first by Pandit Deendayal Upadhyaya, an original socio-economic thinker of the last century, these bank loans for amounts ranging from Rs 10,000 to Rs 50,000 have helped in demonstrably altering the lives of lakhs of women across the country.

A large theoretical and empirical literature in development microeconomics suggests that when credit is routed through women, the household as a whole experiences better outcomes in the form of increased consumption or investment on goods.

The SHGs are typically groups of 10 women in the same neighbourhood pursuing economic activities like food processing, catering, tailoring and tiny local trade like vegetable vending, dairy and backyard poultry.

The SHG-led approach differs from traditional micro-finance in several ways.

First, it does not exclusively focus on credit or savings but also includes emphasis on social empowerment, outreach, and capacity building.

Second, the goal is not to establish a separate micro-finance institution but to use the group to intermediate in dealings with the formal sector and help households create a credit history that will eventually allow them to access regular sources of finance.

These loans have proved to be extremely popular among the marginalised and have put these women in meaningful economic pursuits resulting in positive changes in their own lives as well as in their neighbourhoods.

Over the past 40 years, SHGs across South Asia and Southeast Asia have emerged as a social and financial force to reckon with.

In South Asia, the spread of SHGs has been most notable in India.

In 1992, the National Bank for Agriculture and Rural Development (Nabard) piloted the concept with 500 groups.

Since then, the SHG movement has witnessed tremendous growth that helped build one of the world’s largest and fastest-growing networks for micro-finance.

In a form of silent revolution in India, the loans under DAY have grown from Rs 23,319 crore to Rs 84,790 crore in the last five years and the number of SHGs that have received this credit support stood at 5.13 million as on March 31, 2019.

As a result, the dependence on private money lenders has been reduced for groups that were earlier credit-excluded from the formal banking channels.

That a few governments in states like Kerala, Telangana, Andhra Pradesh, Bihar and Odisha have latched on to this opportunity to nurture these women’s SHGs is reflected in the higher disbursals under DAY in these states.

Kerala is a striking example of the power and potential of women’s SHGs with the state government building up this network and using it to bring women to the forefront of other innovative socio-economic activities.

For instance, the government there has recently promoted and used women’s SHGs for the construction of houses under the Rebuild Kerala programme, launched after last year’s devastating floods.

The opportunity for state governments to tap into this fully Centre-funded low-interest credit-linkage programme is immense.

Our experience as the largest lender in the country is that wherever the states have understood the opportunity that DAY affords and entrusted the leadership with efficient bureaucrats, the traction has been immense -- with attendant benefits to the lending banks as well.

SHG loans is one segment where delinquencies are lower.

Even where defaults are noticed, mostly it does not arise from wilful default -- empirically, the credit morality and the “intent to repay” is the highest among women, especially those who borrow relatively smaller sums.

It is a tribute to womenhood in general that bankers face less problems in the recovery of loans given to them.

What then is the potential we are talking about based on the Budget announcement?

We believe that a bank account is the key to financial inclusion and opens the door to many economic possibilities including micro-credit support.

It is estimated that nearly 60 per cent of these accounts are those of women, which works out to 180 million.

In a country that aspires to post real growth rates of 8 per cent and wants to become a $ 5 trillion economy by FY2025, formal credit linkages to these previously excluded groups is imperative.

The gap that needs to be filled to ensure full credit inclusion comes to around 120 million.

It is here that the Budget announcement on interest subvention under DAY offers great possibilities for income support to the marginalised.

Banks are waiting for a formal notification from the Reserve Bank of India on spreading the coverage to all districts.

Once that happens and the enablers in terms of state government support for the formation and nurture of these SHGs is ensured, we believe the scheme will well and truly contribute to antyodaya as envisaged by its original proponent.

This is what we call a bottoms-up approach to inclusive growth.