The markets had till now ignored several high-frequency indicators on its upward journey. However, with earnings showing no sign of recovering, India's ‘overweight’ position is at risk.

Indian equities might be headed for another round of correction, as reality replaces optimism.

Despite the 5.5 per cent fall in the Sensex over 15 trading sessions, strategists believe, the markets are not done.

Over the past week, India has underperformed other emerging market peers.

Indian markets have been the toast of global investors for about a year now, as macroeconomic fundamentals continued to improve compared to Asian neighbours.

Till February, the only risk to equities was the ‘overweight’ position of global funds but with corporate India exiting FY15 on a weak note, the story doesn’t look as rosy.

The markets had till now ignored several high-frequency indicators on its upward journey.

However, with earnings showing no sign of recovering, India's ‘overweight’ position is at risk.

The earnings so far have been a disappointment, as many companies have not delivered on the modest expectations of the Street.

“Even with a 15-20 per cent correction, valuations would remain heady,” says the brokerage.

The market trades at an expensive multiple of 18 times its FY16 earnings. Though earnings estimates have been cut over the past few weeks, consensus estimates for FY16 continue to hover around a high of 17.5 per cent.

The negative momentum in earnings will take much longer than six months to turn around. Keeping in mind that earnings are expected to remain depressed for some more time, valuations look expensive. 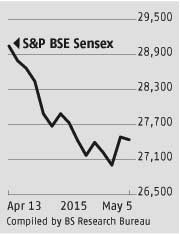 In addition, India’s core sector growth in March has been the slowest in a decade. CLSA has done a comprehensive analysis of high-frequency indicators and concluded that “recovery still eludes”.

Two-wheeler sales declined one per cent y-o-y. While credit and deposit growth picked up to 12.6 per cent and 12.9 per cent, respectively, it was largely due to the year-end demand and due to a capex revival.

Jefferies says economic activity moderated sharply in the March quarter and its Activity Index growth slipped to one per cent, a 10-month low against 4.3 per cent in the nine months ended December 31, 2014.

After the exuberance, downgrades have already started for Indian equities.

Credit Suisse has downgraded India to 'neutral' from 'outperform' versus the MSCI Asia ex-Japan after its outperformance over the past 12 months.

Michael Strobaek, global chief investment officer, and Giles Keating, head of research at Credit Suisse, believe India looks expensive as “Valuation of Indian equities has become stretched at a 12-month forward price/earnings of 18.1, representing an 18.5 per cent premium to the 10-year average.”

The government's move to levy minimum alternate tax on foreign investors has only aggravated things.