While good news from several quarters has been trickling in, El Nino might be a dampener, says T N Ninan. 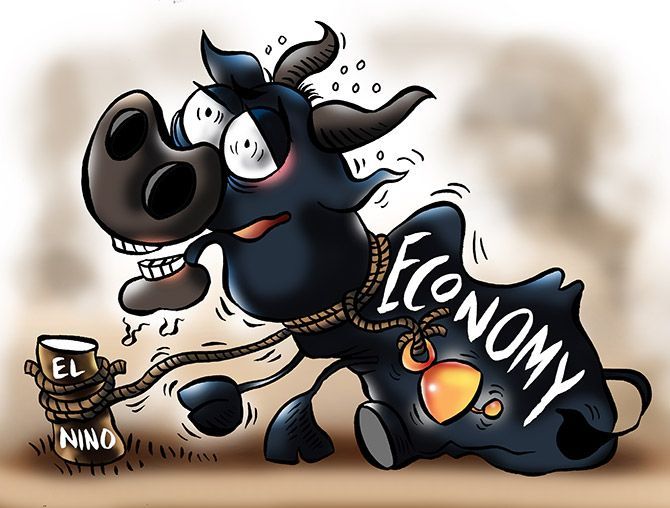 As one financial year closes and another is about to start, the all-important question is whether the tide is turning for the economy, especially after the shock and disruption of demonetisation are over and done with.

Certainly, almost all businesses other than real estate and construction now say that the sales decline or stagnation of the last few months is at an end, and that growth is back.

Over and above this, a positive data stream suggests that some of the problems of recent quarters have started to evaporate.

There is, for instance, the uptick in exports after many months of shrinkage. This is accompanied by an uptick in imports, which points to revival of domestic demand.

Then there are the significantly improved profit numbers for large listed companies in the October-December quarter, building on already positive numbers in the previous quarter.

While it is true that sales are still comparatively sluggish, the sustained spell of low corporate margins may be coming to the end of its run.

A third development is that tax collections in the year seem set to exceed targets, as the finance minister indicated the other day. Revenue buoyancy is invariably a sign of an economic upturn.

Internationally, the notable development is the change in outlook for the world economy, with both the US and Europe looking better than through most of 2016. Improved growth numbers now look more or less certain.

The second positive development (from the viewpoint of an energy-importing country) is the failure by the petroleum exporting countries’ to push up oil prices; they did climb for a while after production cutbacks were announced, but have fallen back to about $50 per barrel after extra shale oil activity kicked in.

For India, this means that the current account will continue to be under control, and that oil will not cause an inflation problem.

On the domestic policy front, straws in the wind suggest that the government is getting ready to finally announce a solution to the corporate debt issue, and the accompanying problem for banks of proliferating bad loans. The problem has defied solution in the first three years of the Modi government, affecting investment and limiting bank lending.

A policy package to help clear the debris will have to be followed up by detailed re-structuring of individual loans. The expectation that the process is about to start is good enough news to send bank stock prices upward.

If the over-all position on problematic loans improves over the coming year, the financial impact will be positive in many ways -- including lower interest rates that will help businesses while encouraging retail lending.

The other big move is of course the introduction of the goods and services tax (GST). The question at this stage is whether the transition to the new tax regime will be smooth or messy.

Most small and medium enterprises are not yet ready for the change, and the full information required is also not yet available to companies. It would make sense therefore to postpone GST’s introduction by a couple of months, to September.After the many years of delay, a further slippage by two months will be of no consequence, and well worth it if it ensures smooth introduction of the new tax and therefore improvement in indirect tax collections.

If direct tax revenue also accelerates because of the fall-out of demonetisation, the tax-GDP ratio could improve next year and sharply improve the government’s spending capacity at a time when private investment has been falling short.

While the good news has been trickling in, with the promise of more to come, the cloud on the horizon has to do with the monsoon.

The El Nino effect suggests that 2017 will not be a repeat of the bumper agriculture year that 2016 has been, but the macro-economic impact of a sub-normal monsoon is likely to be limited, and certainly not enough to neutralise the positive trends that are already in evidence.