'We may have moved back three decades on the fiscal situation,' notes T N Ninan. 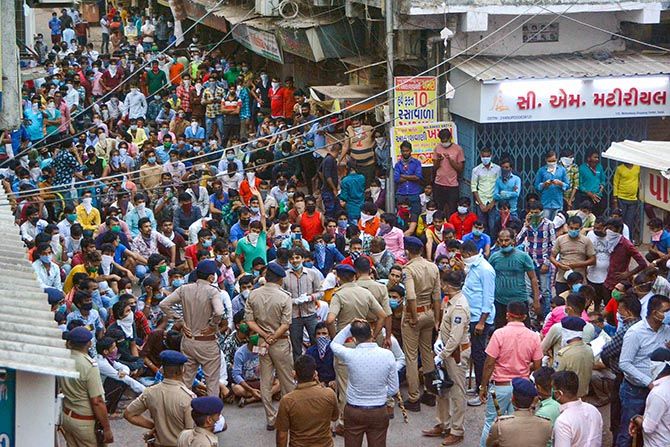 IMAGE: Police in Surat negotiate with migrant workers who gathered in large numbers demanding they be allowed to go back to their villages after the national lockdown was extended, April 14, 2020 Photograph: PTI Photo

There are three phases on a standard growth curve, like one that plots the progress of COVID-19.

The first is when the number of new cases increases every day at a steady or accelerating rate.

The second is when the rate of growth declines; the total number of cases continues to increase, but the curve flattens.

The third phase is when the tally of new cases daily stops increasing altogether and begins to decline.

Seven of the top 10 countries that account for 80 per cent of the million cases so far are into the second or the third phase.

The exceptions are the US, Britain, and Turkey.

The world as a whole seems to be at the fag end of the first phase of the curve.

India is at the same spot, or would have been without the contribution of the Tablighi Jamaat.

If we follow the norm, which is to track proliferation from the day the country notched up 100 cases (March 14), it took nine days to quintuple to 500.

In the first 10 days of the subsequent lockdown, the number has quintupled again to over 2,500.

If we quintuple again in the 11 remaining days of the lockdown, the total would get to about 12,000 by mid-April.

If we have not moved decisively into the second phase by then, despite the lockdown, it would be really bad news.

No wonder the prime minister has suggested only a phased ending of the lockdown.

Fortunately, we may never reach the cases-to-population ratio seen in Western Europe.

Cases numbering 100,000 for populations of 50 million to 60 million in Europe would translate pro rata in India into a peak of well over 2 million -- whereas the world as a whole has just reached a million cases.

Still, the limitations of India's medicare infrastructure could soon be in evidence.

The government's response has been a combination of maximalism (for you and me) and minimalism for itself (the rate of testing and size of relief package).

Instead, a maximal lockdown (closure of factories, loss of incomes, crisis for migrants, etc) should have been accompanied by more generous, universal pay-outs, starting immediately and not a week later.

The lack of forethought is becoming a habit: Demonetisation in 2016 saw a shortage of new currency notes, made worse because they were issued in a different size that necessitated re-calibrating cash-dispensing machines.

What is the impact on the economy?

Direct tax revenue for the full year is where it was two years earlier, when the economy was 15 per cent smaller in nominal terms.

Some of the numbers would be worse than in the 2008 financial crisis.

The fiscal stress will increase as revenue shrinks and crisis-driven expenditure goes up.

We may therefore have moved back three decades on the fiscal situation.

The finance minister had a cushion then: He could squeeze capital expenditure in the Budget.

Since that is now a much smaller fraction of GDP, the cushion no longer exists.

One should expect a quarter or two when the economy shrinks, and after that a slow recovery.

Slow, because of the time needed by closed firms to start up again, tight fiscal constraints, an unfriendly trade environment, lower consumption as household budgets reflect lay-offs and pay cuts, and therefore an investment famine.

There will also be renewed life for the twin-deficit problem: Amid falling demand that has already provoked a commodity price crash averaging 25 to 30 per cent, heavy corporate debt could morph into stressed assets for the financial sector.

The first decade of the new century ended in crisis.

The second has done the same in an environment of sharply slowing growth.

The first half of the third decade, if not all of it, is likely to fare much worse than the last two decades.

Do please light your lamps as the lights go out.