Column: Why the media's credibility is at stake 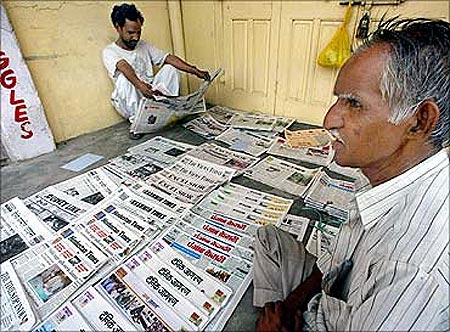 "The curious dealings of Robert Vadra have become even more curious, with a bank mentioned in the balance sheet of one of his companies denying it ever undertook a transaction clearly stated in the firm's auditor's report."

This is how a leading pink paper of the country carried out a story on the latest "scam" to hit the political scene.

On a pointed question as to whether Corporation Bank  the bank in question - had given an overdraft facility of Rs 7.94 crores to Vadra's firm Sky Light Hospitality, (a company in which Vadra is a director) the bank categorically denied any such facility having been extended to the Company.

The Banks is spot on. But I must hasten to add - so is the company! How is that possible? This requires some explanation.

The operating words are "book OD" and not "OD facility from Bank."

I am sure any reader would distinguish between the two. Simply put, there was no money in the bank account of the company when the cheque was issued. Neither was there an OD facility.

But that does not preclude a company from issuing a cheque and passing the relevant accounting entry in the books of accounts. Let me amplify.

When the account holder has bank balance of Rs 1 lakh and a cheque is issued for Rs 7.95 crores, the books will show an "OD" of Rs 7.94 crores on the date on which the entry is passed.

This entry is an accounting illusion at best, bad business practice at worst. And in the absence of a facility, if the cheque is presented, the bank will be duty bound to bounce the cheque.

Any analyst of financial statements should know that every balance sheet should be read with the Notes on Accounts. When read so in the instant case, remember, every question raised on the OD issue gets answered instantly.

Yet these questions were raised by one of India's leading business dailies. That makes matters worse.

What is crucial is all that I have stated above is part of everyday accounting treatment with most corporates.

It is indeed a sad reflection that some of India's leading business dailies who comment, critique and question the functioning of corporates do not have trained manpower to even read and understand simple issues stated in a balance sheet.

Interestingly the story does not stop there. Now comes the titillating part. Not to be left behind, one of India's leading English channels on its part poses a series of questions on the links between Robert Vadra, Corporation Bank and his Income-Tax returns little realising that these are extraneous to the issue on hand.

What is missed in the melee is that we are not taking about Vadra's Balance Sheet; we are talking of a company viz., Sky Light Hospitality in which Vadra is a director.

Students of company law know that there is a world of difference between Vadra's balance sheet and balance sheet of M/s Sky Light Hospitality. And yet repeatedly questions have been raised by the channel on Vadra!

All these questions I must state with all humility are unrelated to the case on hand.

Surely, all these define the inability of our media - not all but most - to raise pertinent questions leave alone understand complex transactions, sift through data, cut out the unrelated and carry out appropriate investigations. Most have very little understanding of economics or law, usually both.

When it comes to fundamental issues involving corporate, corruption or anti money-laundering laws, media is increasingly demonstrating its ignorance.

An ignorant media is naturally incompetent to investigate, comprehend and report on simple issues. In the process, media is progressively becoming irrelevant.

Strangely, most facts concerning the business ventures of Robert Vadra have been in public domain for over a year now. The Economic Times in a story titled "Robert Vadra ties up with DLF, makes low-key entry into Real estate business" [March 14, 2011] had put up all these details then.

Despite being India's widely circulated business daily; inexplicably it failed to pursue the matter to a logical conclusion. Perhaps it lacked the necessary investigative bandwidth.

This inability to pursue issues pointedly dents the credibility of the media further.

It is indeed a sad reflection on the state of affairs of our media that it took the doggedness of a taxman turned social activist turned politician to pointedly raise questions about these dodgy transactions. And once he did, most in the media instantly began asking questions, even if it were immaterial.

In the process, with its penchant for trivia, media is yet again exposed and reduced to play the role of a cheerleader. And remember cheerleaders cannot be leaders.

It is indeed galling that despite the tsunami of questions raised there are several questions not put forth by our media. For starters, there is a divergence in the position as reported by DLF on the Manesar Land and that of Sky Light Hospitality Private Limited.

It may be noted that the former in a press release has stated that "said plot was taken over by DLF in FY 2008-09 itself" and "the said property was conveyanced in favour of DLF."  Simply put, DLF is the owner of the land at-least since March 31, 2009.

But Sky Light continues to declare that it is the owner of the land as late as 31st March 2011 in its Balance Sheet. It is in this connection one is reminded of the old Hindi classic  Ek Phool Do Mali - a fact that can be reconciled by a visit by the media to the local land registration authority.

Interestingly, (as per DLF) this land seems to have been purchased by Sky Light somewhere between 2007 and 2008 for Rs 15.38 crores and sold within a year for Rs 58 crores!

Sky Light does not seem to have purchased this land with its money. Rather, its Balance Sheet suggests that it did so with the sums advanced by DLF. What complicates the matter is that Sky Light has used the funds of DLF and in the process made a killing. Surely that is a corporate governance issue for DLF and more particularly its independent directors have a lot to answer.

But there is something more. Recall that DLF in its statement concedes that the said land was conveyanced "after receipt of all requisite approvals." In short, the spurt in the value of the land within one year is the crux of the issue.

Naturally further questions arise. If that were so, why did DLF not buy the land directly? Was the ownership routed through Sky light so as to ensure that the property was enriched by "appropriate licenses" from the Haryana Government? Assuming that this is the case, the exorbitant price paid by DLF for this property obviously includes certain sums paid for obtaining such licenses.

The crucial question therefore is does this price of land include a quid pro quo for Sky Light  read Vadra  for obtaining necessary licenses for the land from Haryana Government?

Naturally, licenses obtained by Sky Light between its date of purchase and its subsequent sale [DLF version] would throw more light on the subject. If there were no approvals in the interregnum, one must state that DLF made a bad bargain and close the subject.

On the other hand, if indeed some approvals were obtained when Sky Light was the owner, the sale proceeds of Rs 58 Crores apparently includes some grey elements, thereby inviting the provisions of Prevention of Corruption Act and consequently the Prevention of the Money Laundering Act too.

And that would in turn call for a full-fledged investigation by the CBI and the Enforcement Directorate.

Naturally "approvals" are the crux of the issue; an area for some hard-nosed yet simple investigation. Unfortunately, to this date not many from the media have perused this line of investigation. A simple application to the Haryana Government under the RTI may probably do the trick.

Is anyone game? Or should we wait for the next round of revelations from someone else? And should that happen the credibility of the media will nosedive even further!