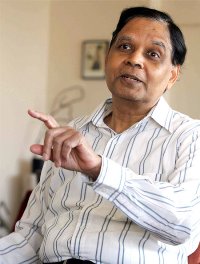 The Union government has begun the new year by finally announcing the new name and scope of the Planning Commission, the end of which the prime minister had long ago announced, from the ramparts of the Red Fort on Independence Day.

According to a government statement, the new organisation is to be called the NITI Aayog.

'Niti' is the Hindi word for 'policy'; the statement, however, specified that 'NITI' would be an acronym for 'National Institution for Transforming India'.

According to several reports, the head of the NITI Aayog might well be the Columbia University professor and economist Arvind Panagariya, who has long been supportive of reforms.

This move is welcome for several reasons.

One is that, from day one, the National Democratic Alliance government has been woefully short of solid technocratic advice.

The prime minister’s economic advisory council was disbanded early on, and not reconstituted.

Even the think-tank element of the Planning Commission itself has not really been functional since the new government took over.

The finance ministry was only granted its chief economic advisor after a long gap. Altogether, the economic policy advisory capacity within the government has been severely limited for some time.

This has perhaps had an effect on some of the government’s decisions.

For example, there is an urgent need for coherent thinking on the subject of natural resources pricing.

It is in such areas that the new NITI Aayog will have to make its mark.

Much will depend on the personal relationship between the head of the revamped commission and the prime minister.

Indeed the overall efficacy of the NITI Aayog will depend crucially on the quality of experts it can round up to be its members, and also the headroom and space the prime minister gives it to allow it to operate effectively.

The Aayog’s structure will also be relevant.

Any enhanced participation from state chief ministers may help the government achieve the prime minister’s stated goal of cooperative federalism -- but for that to happen the new governing council has to be more active, with regular consultations.

The earlier equivalent federal consultative body was the National Development Council, and its meetings were far too infrequent.

Among the other duties of the old commission was the oversight of the transfer of financial allocations to the state.

The formal transfer of this responsibility for financial allocations -- both special and related to centrally sponsored programmes -- to the finance ministry means that capacity at the destination ministry to discharge this new responsibility will have to be upgraded.

However, what remains unclear is the fate of the current Five-Year Plan, or of the future Plans and of the annual Plan exercises.

It is possible that these have all been quietly abandoned.

If so, this is indeed a major change.

While they had lost much of their relevance, the scenario-building aspect of the Plans need not be completely junked.

All this transformation will be able to yield genuine results if there is more clarity on the structure and specific responsibilities of the new organisation.