Why is the rupee under pressure?

Depreciating rupee gels well for exporters and a weak rupee will make Indian produce more competitive in global markets which will be fruitful for India's exports, notes Ram Pitre 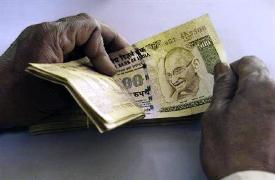 The rupee has been falling sharply since the start of May on concerns about the US Federal Reserve withdrawing its monetary stimulus and as the Reserve Bank of India dashed hopes of further rate cuts.

The rupee has been falling for five straight weeks, taking its losses this quarter to 6.6 per cent, making it the worst performing currencies in Asia during this period.

The rupee has fallen to a record low, inching closer to the 59-mark.

Concerns that any reduction in bond-buying by the Federal Reserve would lower inflows to higher-yielding emerging-market assets, have pulled the rupee lower.

The rupee also came under pressure as S&P retained its ‘negative’ outlook on India's BBB-minus -- or lowest investment-grade -- long-term sovereign debt rating, and said a downgrade was possible if the pace of economic reforms undertaken by the government slowed and hurt prospects of a growth recovery.

How does it affect the economy?

Depreciating rupee gels well for exporters and a weak rupee will make Indian produce more competitive in global markets which will be fruitful for India's exports.

However, importers will strongly feel the pinch of a falling rupee as they will be forced to pay more rupees on imported products.

How can it be checked?

To attract investments, the RBI can ease capital controls by increasing the foreign institutional investors’ limit on investment in government and corporate debt instruments and introduce higher ceilings in ECB’s.

India could further raise the combined $76.5 billion investment limits on government and corporate debt after last hiking them in March, but any increase would likely be small.

The RBI could open a dollar window for oil companies to buy dollars directly from the central bank instead of from markets, but it would drain foreign exchange reserves.

But more importantly, the government should take somemeasures to bring FDI and create a healthy environment for economic growth.

Key policy reforms that should be initiated include rolling of Goods and Services Tax and Direct Tax Code.

The exchange rate movement would depend a lot on when the sentiments improve, which is guided by FII flows and RBI action.

Given the global dollar strength on expectations of the Fed tapering back its asset purchases and outflow of funds from emerging markets; the rupee is likely to remain under pressure in near term.

However, from a longer term perspective (year perspective), the rupee could bounce back to below 56- levels.

Fall in global commodity prices will help in reduction of imported inflation and help in reducing stress on trade deficit.

Also, the recent measures taken by the central bank and the government will help in reducing pressure on the current account deficit, thereby supporting the rupee in long term.