Just over 100 of the total list of 187 countries are in the 'High' or 'Very High' human development category, rues T N Ninan 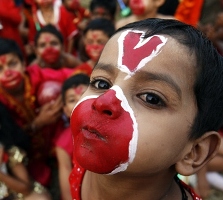 Once a year, the United Nations Development Programme releases its Human Development Report.

This puts out a country-wise Human Development Index, which is constructed by using a combination of years of schooling, life expectancy and income indicators.

Like its predecessors, the 2014 report (released two days ago) allows one to compare India’s performance with other countries.

The country’s overall rank is 135 -- which puts it nearly three-quarters of the way down the list.

India’s score for 2013, at 0.586, places it near the bottom of the Medium category -- which is understandable since it crossed from Low to Medium only six or seven years ago.

The list bears out once again that human development is linked closely to income.

The richest countries have the best human development index, and the poorest have the worst.

So incomes and human development tend to go together.

This is intuitive, indeed obvious, and should not surprise.

The second headline finding, again not new but worth mentioning, is that India has done better than the average in terms of the rate at which it has improved its score on the index.

However, quite a few countries have managed to improve their index faster than India -- among them Bangladesh, which now has a better index than Pakistan despite being much poorer (both countries are ranked somewhat lower than India).

At India’s present rate of progress on human development, it may take some 15 years for India to get to where China is today, (in the High development category, with an index of 0.719).

That said, there is a lot of grim news buried in the details. For instance, India accounts for a mammoth 40 per cent of those who suffer from ‘multi-dimensional poverty’ -- UNDP’s term for deprivation.

The country also does poorly on many indicators of inequality, in both absolute as well as relative terms. Gender inequality is a weak spot.

On education, the numbers are poor and India does particularly poorly on the equality front.

But the country seems to be catching up -- enrolment ratios at primary, secondary and tertiary levels are now comparable with the average for the Medium category.

But on both education and health, the country spends somewhat less (in relation to gross domestic product, or GDP) than Medium category countries as a whole.

Two factors are particularly worrisome, and both relate to the environment.

One is that India suffers from natural resource depletion at a rate that equals 4.9 per cent of gross national income -- which must be placed against annual GDP growth in the last three years of 5.3 per cent.

It does not help that the figure for China is 6.1 per cent, and that the average for Medium category countries is 7.7 per cent.

Also a matter of concern is the picture on water. India draws 33.9 per cent of its renewal water resources each year, compared to a Medium category average of 13.9 per cent, and China’s figure of 19.5 per cent.

It should be clear that growth achieved while doing damage to the environment is not sustainable.

If one factors in the additional point that the people who suffer the most on account of environmental damage are the poor, then it should be clear that a growth process that is environmentally harmful is also anti-poor.

Image: Boys with their faces painted before a play reenacting a scene from the Ramayana. Photograph: Ajay Verma/Reuters